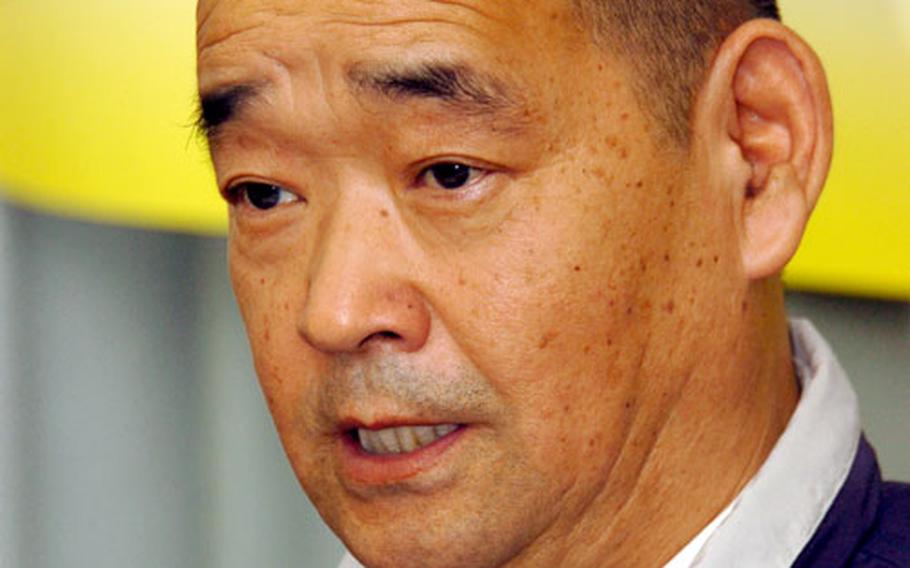 Masanori Yamazaki, boyfriend of Yoshie Sato, is party to a lawsuit seeking $1.7 million compensation for the Yokosuka woman’s death at the hands of a Navy airman. (Christopher B. Stoltz / S&S)

YOKOHAMA, Japan &#8212; The family of a Yokosuka woman beaten to death early this year filed a lawsuit Friday seeking 200 million yen &#8212; about $1.7 million &#8212; from the Japanese government and the U.S. Navy airman convicted of the killing.

The family of Yoshie Sato took the civil action due to the &#8220;cruel nature&#8221; of the 56-year-old woman&#8217;s death and because they believe the U.S. Navy could have prevented it, family attorneys said during a news conference Friday.

Sato&#8217;s two eldest sons and her boyfriend are suing under a U.S.-Japan status-of-forces-agreement provision that compensates victims for damages inflicted by U.S. servicemembers conducting official duties. Although Airman William Oliver Reese technically was off duty when he attacked Sato on Jan. 3, the Navy is responsible for his actions, the attorneys contended.

An estimated 50 lawyers are representing the three family members, including those from military opposition groups, according to the complaint filed in Yokohama District Court.

&#8220;There had been many alcohol-related incidents committed by servicemembers prior to this but (Reese) still had been drinking from 10:30 p.m. to 5:30 a.m. with no restrictions,&#8221; the complaint stated.

Reese attacked Sato as she was walking to Yokosuka Chuo train station, according to testimony at his trial in Yokohama.

He dragged Sato off the street, beat her for more than 10 minutes and took money from her purse.

Sato died from internal injuries in a Yokosuka hospital later that day.

Reese, 22, pled guilty to the robbery-homicide and was sentenced to life imprisonment on June 2.

&#8220;U.S. Forces should not just tell servicemembers not to commit crimes in Japan but find a better way of educating them specifically. They should have made better efforts to prevent this,&#8221; Hiroshi Takahashi, an attorney for the family, said Friday.

Said another lawyer in the lawsuit, Kazuo Kimura: &#8220;Japan and American governments should take responsibility even if incidents are caused during off-duty hours. Crimes will not go away as long as there are military bases&#8221; in Japan.

Under the status of forces agreement, the Japanese government is legally responsible for paying victims for damages caused by on-duty U.S. servicemembers, although at least half the money would come from the United States.

According to a SOFA division official at the Ministry of Foreign Affairs, if the court or a settlement finds the U.S. military responsible, it would pay 75 percent of the claim and the Japanese government would pay the remainder.

If both are found at fault, payment is evenly split.

Sato&#8217;s boyfriend, Masanori Yamazaki, said that she would want him to fight for just compensation.

Japan&#8217;s Defense Facilities Administration Agency officials declined to comment until they had read the complaint.