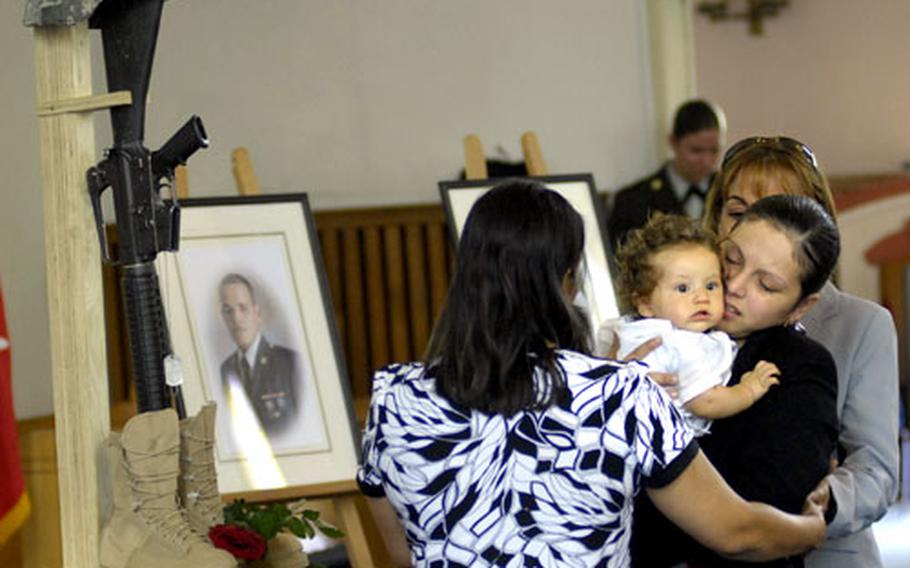 Melanie Nieves Atzmann holds her six month-old son Steven as she mourns the loss of her husband, Sgt. Jose Enrique Ulloa, at the conclusion of his memorial ceremony Thursday at the Mannheim chapel. (Ben Bloker / S&S)

MANNHEIM, Germany &#8212; As hundreds of soldiers and civilians awaited the start of Thursday afternoon&#8217;s memorial ceremony for Sgt. Jose Enrique Ulloa, they caught glimpses of the 23-year-old&#8217;s life.

A projector beamed pictures of the young husband and father onto a wall at Benjamin Franklin Village Chapel: Ulloa bedside at the hospital, kissing the forehead of his newborn son, Steven. Ulloa with a sleeping Steven cuddled on his chest. Ulloa flexing his muscles with his shirt off. Ulloa stoically posed in his Army uniform. Ulloa kissing his wife, Melanie Nieves Atzmann. Ulloa smiling.

Ulloa died Aug. 8 when a roadside bomb exploded near his vehicle in Sadr City, Iraq. He was serving as a heavy wheeled vehicle driver with the 3rd platoon, 515th Transportation Company of Mannheim. The Dominican Republic native, who graduated high school in New York City, deployed with the 515th Transportation Company "High Rollers" to Iraq in July 2007. It was his second deployment to Iraq.

Ulloa joined the Army in March 2005. He achieved the rank of sergeant in 2&#189; years and spent half his Army career deployed to Iraq.

Staff Sgt. Ruben Burgos gave his remarks about Ulloa in Spanish, but a translation was provided in the ceremony&#8217;s program.

Ulloa asked Burgos only the one small favor of watching over his family while he was gone.

"I will never forget you," Burgos said. "I will keep you in my heart, and I will keep my promise to watch over your family."

Last year while preparing to deploy to Iraq, Ulloa had a lengthy conversation with Chief Warrant Officer 2 Anthony Hampton about his life goals.

"He said, &#8216;Sir, I want to be an NCO so I can take care of and lead soldiers,&#8217; " Hampton said. "Little did he know that he already modeled the character and the qualities of an NCO. Five months later, he reached his goal."

Capt. Roland Foss, 515th Transportation Company rear detachment commander, described Ulloa as an intense, loud, always motivated and always happy soldier who sought responsibility. Foss said he does not hesitate to encourage young soldiers to use Ulloa&#8217;s example of service as a template for their professional lives.

"He died the most honorable death, but in life he exemplified the best qualities of the American soldier," Foss said.

Ulloa will be posthumously awarded the Bronze Star, the Purple Heart, the Army Commendation Medal and the Combat Action Badge.

He is survived by his wife and his 6-month-old son.