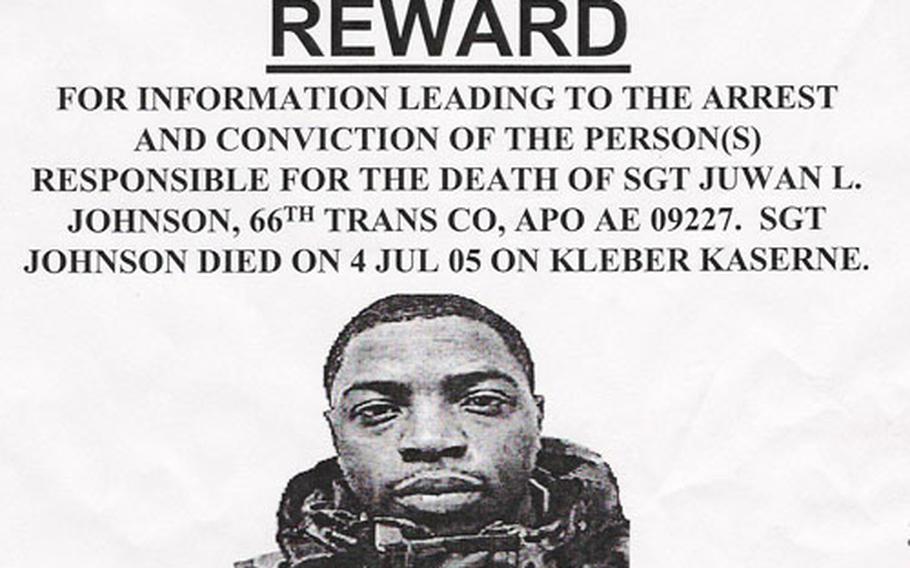 A handout offering a $25,000 reward for information in the murder case of Sgt. Juwan Johnson. ()

A handout offering a $25,000 reward for information in the murder case of Sgt. Juwan Johnson. () 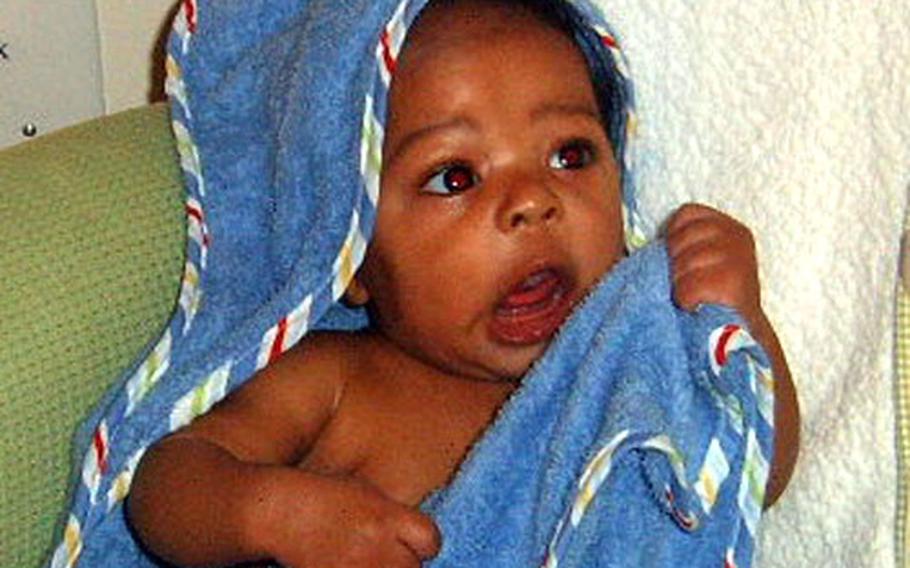 KAISERSLAUTERN, Germany &#8212; Nearly 11 months have passed since Army Sgt. Juwan L. Johnson, the victim of a brutal murder, was found dead in his barracks bed on Kleber Kaserne.

Since Johnson&#8217;s death on July 4 his wife, Kenika, has given birth to the couple&#8217;s child, Juwan Jr. His family learned, despite an initial news release indicating no foul play, that Johnson was beaten to death. Eight troops have been identified as murder suspects. Investigators plastered $25,000 reward fliers around the Kaiserslautern military community.

But as the investigation nears the one- year mark and the reward money remains available, Johnson&#8217;s killer or killers have not been brought to justice. On Wednesday, Johnson would have turned 26 years old.

&#8220;To date, no one has been charged in the death of Sgt. Juwan Johnson, nor have any soldiers been disciplined or administratively separated from the Army based on any connection to Sgt. Johnson&#8217;s death,&#8221; said Maj. Allen Hing, 21st Theater Support Command public affairs officer.

A soldier for six years, Johnson was deployed to Iraq with the 66th Transportation Company, returning in early 2005.

With Johnson set to leave the Army and return to the States three weeks before his death, Stephanie Cockrell questioned why her son would join a gang.

When asked about the investigation, the Army Criminal Investigation Command (CID) office in Kaiserslautern and CID spokesman Chris Grey in Fort Belvoir, Va., said &#8212; per policy &#8212; that it does not comment on ongoing investigations.

The $25,000 reward notice appeared in late 2005 and was plastered throughout the Kaiserslautern area. At one point, a television commercial advertising the reward was aired on American Forces Network.

Grey would not say if the reward sparked any tips or leads.

&#8220;That is information that we will not be able to discuss at this time due to the ongoing criminal investigation,&#8221; he said. &#8220;We do encourage anyone who has any information relating to this case to get in touch with CID or the military police.&#8221;

Even the smallest detail could be exactly what investigators are looking for to complete the investigation, Grey said. Grey did say that offering cash rewards is not uncommon for CID.

A fellow soldier found Johnson unresponsive in his barracks room on July 4, 2005. Resuscitation measures were not performed and a German physician pronounced Johnson dead at 10:23 a.m., according to the final autopsy report.

&#8220;The cause of death of this 25-year-old male is multiple blunt force injuries reportedly sustained in a physical assault resulting in fatal injury to the heart and brain,&#8221; according to the autopsy opinion signed by Col. Kathleen M. Ingwersen, Armed Forces regional medical examiner, who performed the autopsy. &#8220;The manner of death, in my opinion, is homicide. The decedent was not under the pharmacologic effect of drugs, including steroids or alcohol at the time of death.&#8221;

At 5-foot-3, 182 pounds and of muscular build, Johnson was beaten all over his back, according to evidence in the autopsy.

The initial news release issued by the 21st Theater Support Command public affairs office on July 7, 2005, stated that Johnson&#8217;s cause of death had yet to be determined, and an investigation was under way.

Hing, the 21st TSC public affairs officer, said the release was written from information in the initial military police report, which stated there were no signs of foul play.

Eight suspects, but no prosecutions

In the March 2 letter, Stephens writes that investigators concluded Johnson&#8217;s injuries were inflicted in a &#8220;jumping in&#8221; ceremony.

&#8220;Eight military service members have been identified as suspects in your son&#8217;s murder,&#8221; according to Stephens&#8217; letter. &#8220;It is important to note that this command neither prosecutes nor takes other adverse action against an individual based on an investigation. Such action falls under the purview of the offender&#8217;s chain of command or appropriate civilian court.&#8221;

Now nearly 11 months after her son&#8217;s death, Cockrell says she has no confidence that the people responsible for Johnson&#8217;s death will be brought to justice. The fact that Johnson survived a deployment to Iraq only to be killed in Germany doesn&#8217;t make things easier for the family, Cockrell said.

Without knowing what happened, it is hard to put closure on the tragedy, she said. Cockrell made a plea to those who know what happened to have the honor and dignity to tell her, if not the military.

She knows one day her grandson will ask about his father. Until Cockrell gets an answer, she&#8217;ll keep asking questions.