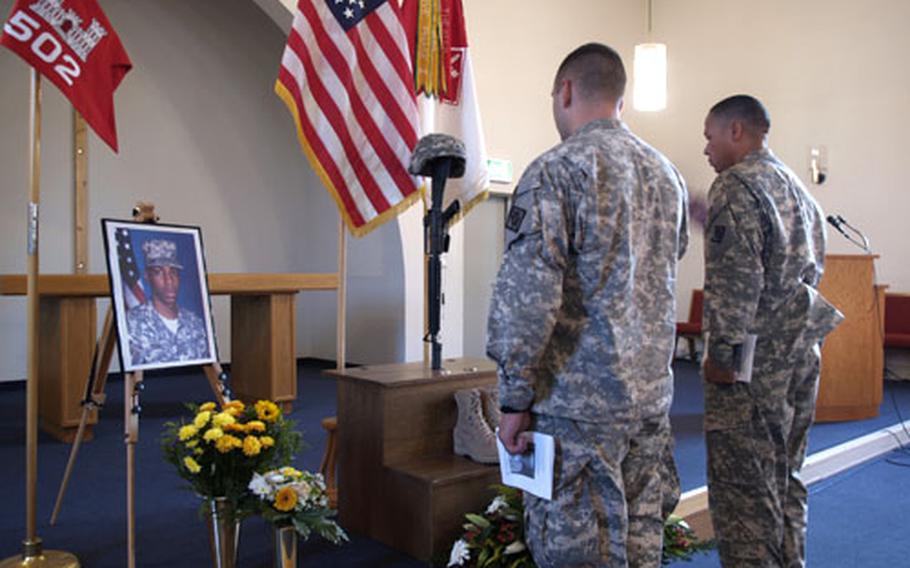 HANAU, Germany &#8212; Fatherless himself, Pfc. Jeremy Price joined the Army because he loved his son.

At 20, Price looked to the Army as a ticket out of the hard life he&#8217;d known in Chicago, fellow soldiers said. He hoped that he, his wife and their baby boy might have a better future.

He is now fatherless, and for the time being, motherless as well.

On Oct. 8, Jeremy Price was stabbed to death during his 21st birthday party in his quarters on Pioneer Kaserne, two months after arriving in Germany, authorities say.

German authorities have charged his wife, Joanna Chestnut Price, 22, with manslaughter. She is being held in a German jail.

The young private&#8217;s killing has hit his unit hard.

Thurman is also from Chicago, he told those gathered at the service, and he&#8217;d seen a little bit of himself in Price. He said he knew Price had respected him and needed his guidance.

The boy can stay in that placement for 90 days without further approval, and approval after that is not expected to be difficult, Borkowski said. But, he said, &#8220;There&#8217;s a long road ahead.&#8221;

Borkowski picked up the boy and his mother when they arrived from Chicago at the Frankfurt airport just a month ago, he said. The unit and garrison had been helping the young family through some &#8220;issues&#8221; but &#8220;nothing that would have indicated this severity,&#8221; he said.

Burkowski said at the service that he saw &#8220;grief, sorrow and guilt&#8221; on the faces of his soldiers, but that there was no need for guilt if they had acted with good will.

The fact that Price had volunteered during war, when he knew that most recruits are sent to Iraq or Afghanistan within their first six months, was &#8220;a testament to his strength and determination,&#8221; Borkowski said at the memorial. Some 170 unit soldiers are in Iraq now, leaving just a few more than 30 in the rear.

&#8220;Pfc. Price came into the Army looking for a home,&#8221; Chaplain (Capt.) Peter Keough said. &#8220;His death brings much hurt, grief and pain to his fellow soldiers. How do we move forward when our hearts hurt as much as they do? Let his life be the one thing that inspires and encourages you every single day &#8230; as if it were your last.&#8221;

If convicted, she could be sentenced to up to 15 years in prison, he said.