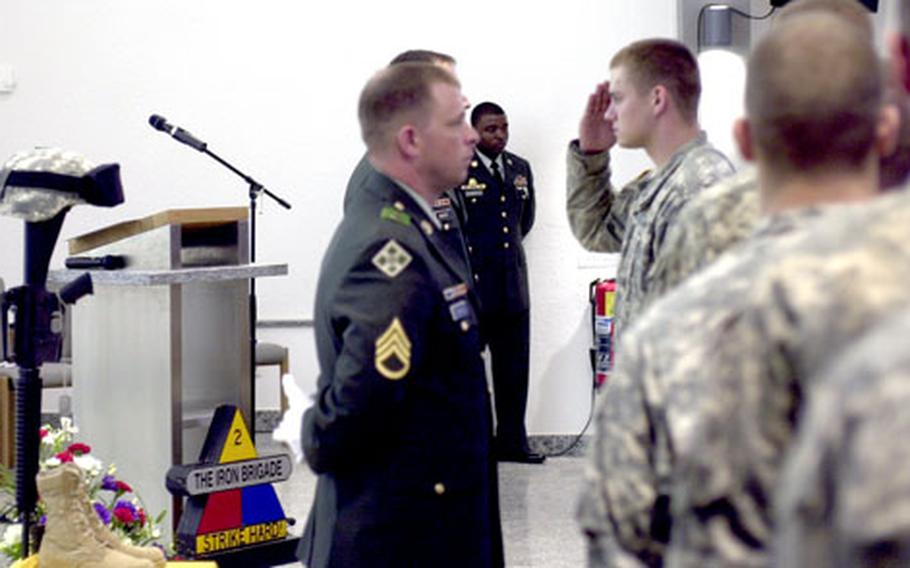 The Baumholder community gathered Friday to pay homage to Staff Sgt. Jeffrey Loa, who died Aug. 16 after a makeshift bomb detonated while he was on foot patrol in Ramadi, Iraq. (Geoff Ziezulewicz / S&S)

BAUMHOLDER, Germany &#8212; To hear his loved ones tell it, Staff Sgt. Jeffrey Loa was constantly smiling and lifting the morale of everyone around him. He was as adept with a joke as he was with his skills as a tank commander for the 1st Armored Division&#8217;s 1st Battalion, 35th Armor Regiment.

But underneath that smile and good humor was a deep and thoughtful man who loved his family, his soldiers and his country, friends and family said. The Baumholder community remembered Loa during an emotional ceremony Friday at Smith Barracks.

Loa, 32, died Aug. 16 of injuries suffered when a makeshift bomb detonated while he was on foot patrol in Ramadi, Iraq.

It&#8217;s been a rough year for the families and soldiers of Baumholder. The community has lost 18 soldiers from the 2nd Brigade in Iraq since April.

On Friday, Loa was celebrated for his life and his sacrifice.

Loa, a native of American Samoa, was not only a hero for the way he died, but also for the way he lived, said Sgt. 1st Class Eduardo Ramos. Fighting back tears, Ramos recalled Loa as one of the most dedicated noncommissioned officers he had ever known.

Loa left his small community back home for the small community of Baumholder, and his selflessness should be remembered, said Capt. Daniel Costin, the battalion&#8217;s rear detachment commander.

Loa considered Waianae, Hawaii, his second home, and his two brothers and stepbrother were all in the Army, according to reports from the Honolulu Advertiser.

Loa was in the Army for about nine years, and married his wife, Mary, in March of last year.