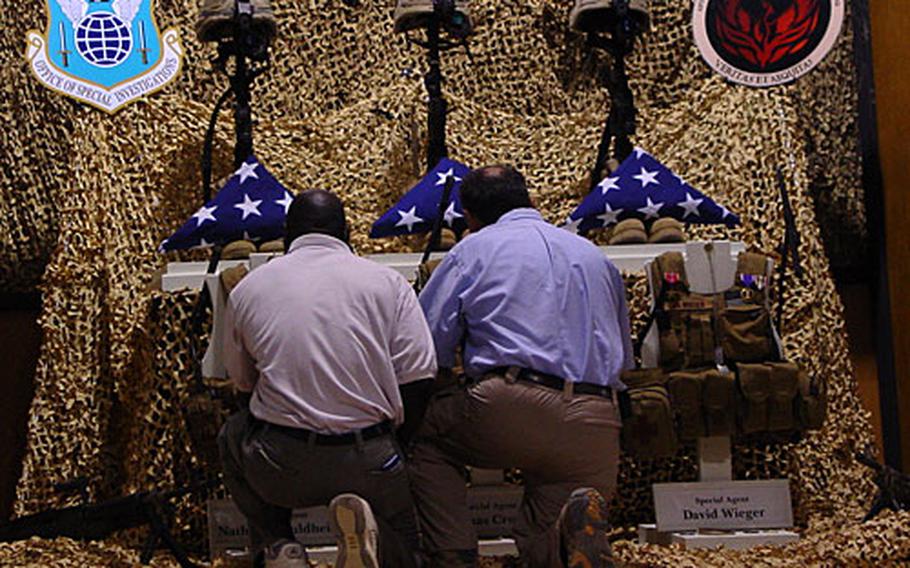 Brig Gen. Dana Simmons, commander of the Air Force&#8217;s Office of Special Investigations, told those who gathered for a memorial ceremony that he always makes two promises to the families of special agents killed in combat. First, he gives them his word that their loved ones will be honored and not forgotten.

Master Sgt. Thomas A. Crowell, 36, of Neosho, Mo., Staff Sgt. David A. Wieger, 28, of North Huntingdon, Pa., and Nathan J. Schuldheiss, 27, a Defense Department civilian investigator from Newport, R.I., died from wounds sustained from a bomb near the American military base in Balad. They were on an intelligence gathering mission against insurgents in the area when they were hit by the blast.

The agency, which includes active-duty, reserve and civilian personnel, has lost seven agents since the U.S. invaded Iraq in March 2003. OSI has lost five just this year. Two other agents, Tech. Sgt. Ryan A. Balmer and Staff Sgt. Matthew J. Kuglics, were killed on June 5 when their vehicle was hit by a roadside bomb.

Air Force special agents spend much of their time in Iraq in teams of 10 to 12 working off base trying to gather information on insurgents and thwart attacks against U.S. bases. One of their main missions is to try to capture those responsible for the same roadside bombs that took the lives of the three agents last week.

The Air Force&#8217;s investigative agency has good track record of following through on their commander&#8217;s pledge to get the attackers. Last year, 130 agents in Iraq and Afghanistan seized 20 tons of weapons and captured or killed more than 500 terrorists and insurgents.

Crowell, Wieger and Schuldheiss took part in numerous operations that led to the capture of insurgents and helped identify dozens of threats to bases.

Maj. Douglas Garavanta, commander of OSI Expeditionary Detachment 2411, called the men heroes for their &#8220;selfless service.&#8221; He assured the agents in attendance and the airmen at the ceremony that the individuals responsible for the attack would &#8220;face the retribution of our agents.&#8221;

All three fallen agents posthumously received Bronze Star Medals for their service in Iraq. It is rare for a civilian to receive such an honor, which is given for heroic or meritorious achievement while serving in or with the military.

The three were attached to the Air Force OSI detachment at Balad during their deployment to Iraq.