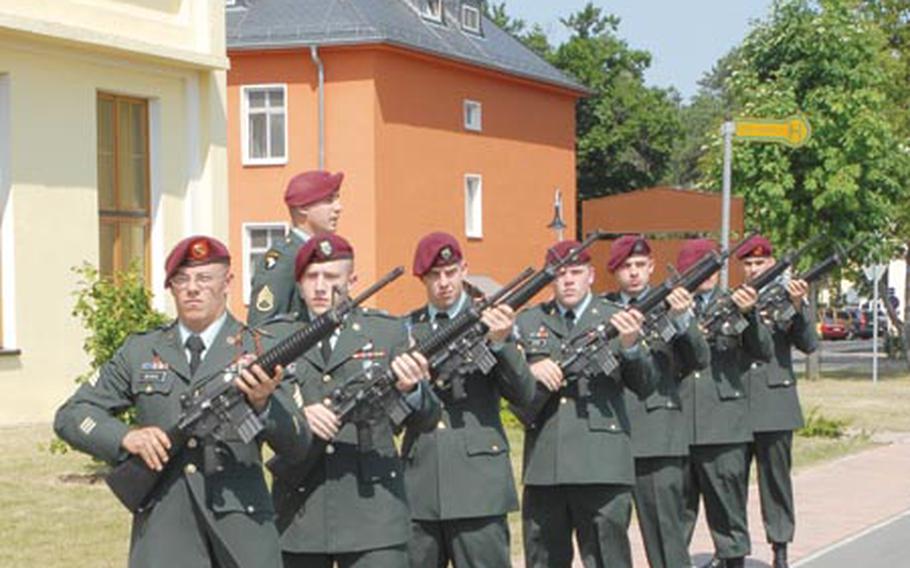 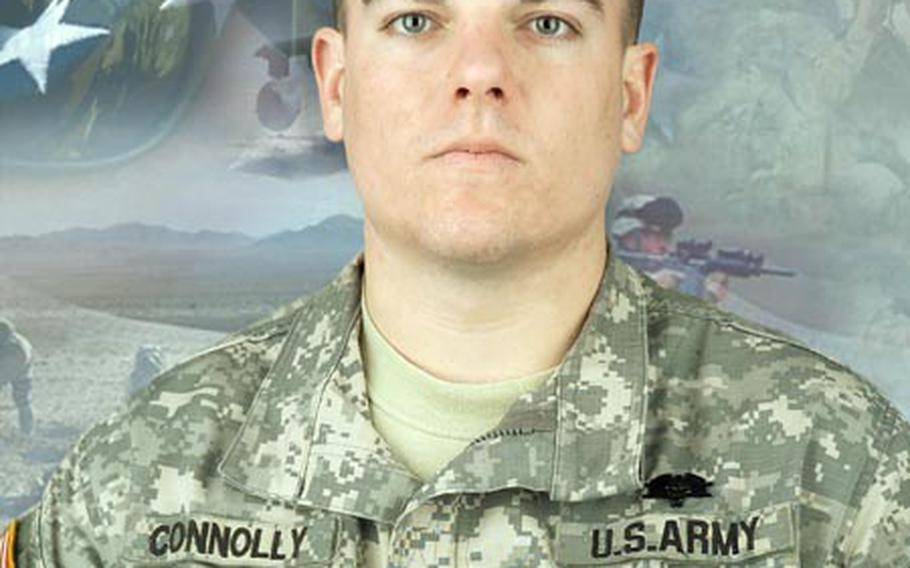 BAMBERG, Germany &#8212; For the second time in about two weeks, the military community here came together to mourn the loss of one of its own.

Just weeks before he was to fly home to his wife and baby girl, Sgt. Ryan James Connolly&#8217;s vehicle was hit by a suspected land mine in Khogyani, Afghanistan.

Though mortally wounded, Connolly &#8212; a combat medic &#8212; told those with him how to treat him and another injured paratroop while being evacuated for medical attention.

Connolly, 24, was about to celebrate his second anniversary with his wife, Stefanie, and see his daughter, Kayla, reach her first birthday.

He had volunteered to join the ranks of the 173rd Airborne Brigade Combat Team in late 2006. Coming from Baumholder, Germany, Connolly knew he would be deploying. Before he left, he earned his Expert Field Medical Badge.

While he was deployed, he was promoted to sergeant.

One of the soldiers who helped get Connolly ready for promotion was his platoon sergeant, Staff Sgt. Jeffrey Bradford, who rode on more than 80 combat patrols with Connolly over the last year. Speaking at Wednesday&#8217;s service, Bradford said, "He was not a subordinate, a soldier working for me, but a brother whose camaraderie was second to none, and whose advice could be counted on."

Bradford recounted example after example of Connolly&#8217;s dedication to his fellow soldiers as their medic, as well as to the Afghan people he served near.

"War is not just a reflection of us fighting &#8212; the usual stuff you see on TV. It&#8217;s a reflection on a couple common interests between individuals and incorporating close ties and memories that will last a lifetime," Bradford said of his friend.

Also speaking at the service was Capt. Wes Watson, who repeated remarks given previously by Connolly&#8217;s commander at a memorial in Khogyani on June 29.

"I was lucky enough to get to know Sgt. Connolly as well as any soldier in my company," Watson read, "and every time we talked, I was constantly impressed with Sgt. Connolly&#8217;s actions, demeanor and intelligence."

A native of Vacaville, Calif., Connolly had secured orders for a new assignment at the Presidio of Monterey health clinic, a job close to home that would allow him to raise Kayla in California.

In addition to his wife and daughter, Connolly is survived by his father, James; mother, Robin Nelson; and stepfather Bob Nelson.

A member of the 173rd&#8217;s Special Troops Battalion, Connolly is the 33rd "Sky Soldier" to have been killed in action during the present deployment. The Bamberg community held a memorial service June 12 for Spc. James Matthew Finley and Pfc. Andrew Jon Shields who were killed May 31 by a roadside bomb in Jalalabad.

The more than 400 members of the battalion &#8212; as well as the troops in the brigade&#8217;s five other battalions and headquarters company &#8212; are due to rotate home to Bamberg and Schweinfurt, in Germany; and to Vicenza, Italy; over the next several weeks.