Sky’s the limit for young gymnast 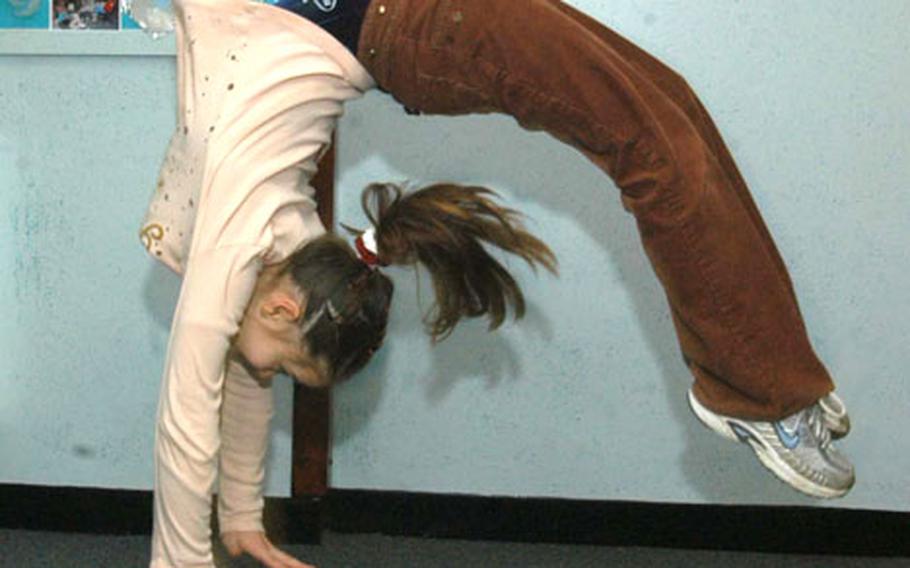 Ten-year-old Rachel Pagio folds herself over in a back handspring in a hallway at Alconbury Elementary School, a trick she can accomplish in even very small spaces. (Ben Murray / S&S)

Ten-year-old Rachel Pagio folds herself over in a back handspring in a hallway at Alconbury Elementary School, a trick she can accomplish in even very small spaces. (Ben Murray / S&S) 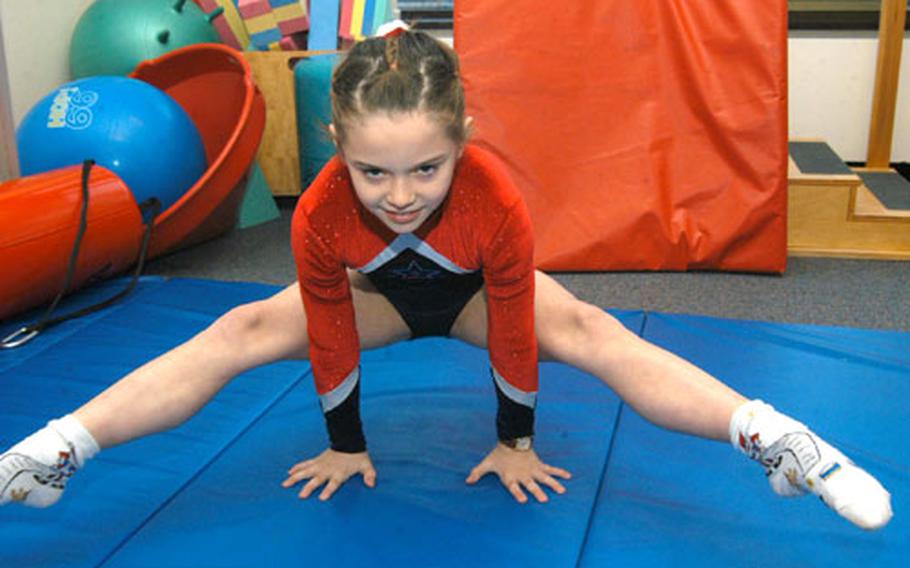 Gymnast Rachel Pagio picks herself up off a mat at Alconbury Elementary School, then stood herself up in a handstand without her feet touching the floor in a strength-training exercise. (Ben Murray / S&S) 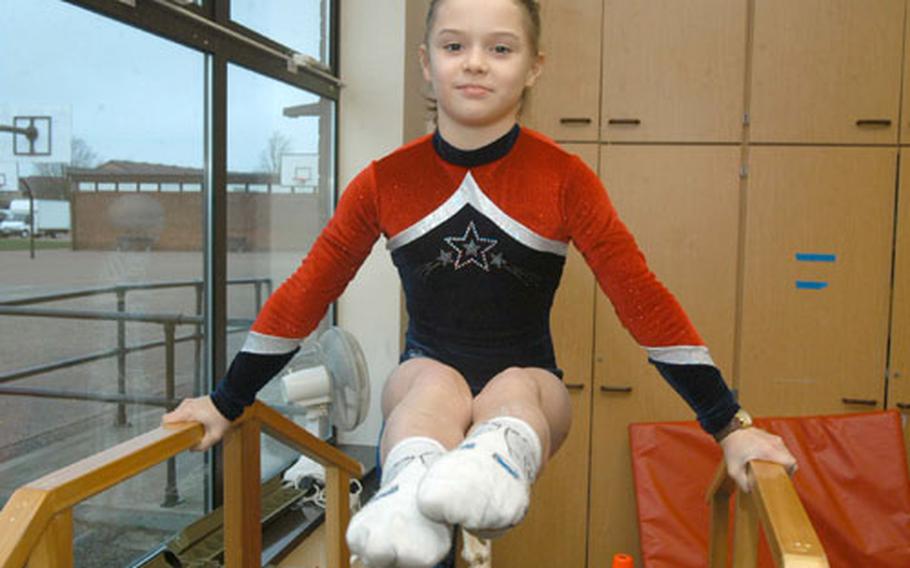 RAF ALCONBURY &#8212; An example of Rachel Pagio&#8217;s talent in gymnastics comes midconversation, when instead of trying to describe what a &#8220;flick&#8221; is, the 10-year-old decides to demonstrate it for observers.

Getting up from her chair, the lithe, tiny fourth-grader steps into a narrow space between a table and a wall and, without hesitation, flips herself over backward in place and ends up on her feet again, bending nearly double without so much as stretching first.

The beam, she said, is her favorite, and probably strongest, apparatus in a skill set that has made her one of the top young gymnasts in the region, with titles in both British and American competition.

Over the past three years, Rachel has done so well at the Cambridgeshire County level, where she won three consecutive titles, that she has been moved up to compete on an elite regional team that selects the best gymnasts from five counties.

Her inclusion on the regional team is a singular achievement, said her coach, Rebecca Morgan, because the eastern region is especially competitive.

Now, she is working to achieve a &#8220;Level 2&#8221; rating from the British Gymnastics Association, which, if she achieves it in November, will allow her to be eligible to compete at the British national level, said her father, Sgt. 1st Class Cliff Pagio.

To reach that level so young, Rachel said, she started in gymnastics at about the age of 5, when she took a class at a military club at West Point, N.Y., where her family was stationed before moving to Alconbury in 2002.

But the young girl also showed natural talent, and when the family arrived in England she joined the well-known Huntingdon Olympic Gymnastics Club, where she now practices five days a week for a total of some 15-20 hours, her parents said.

In competition, Rachel performs on the vault, beam, bars and in the floor exercise. For each apparatus, she can reel off a litany of complicated-sounding tricks and maneuvers (tuck-backs, giants, double flicks), but she prefers the beam, &#8220;because it&#8217;s fun and I&#8217;m pretty good at balancing,&#8221; she said.

But with such small room for error, accidents do happen.

They don&#8217;t stop the young gymnast, however, who said she is working on bigger and more complicated maneuvers &#8212; especially double back flips on the floor exercise and as a beam dismount.

The hours of strength conditioning, stretching and practice don&#8217;t keep her from other pursuits, however. Rachel also is vice president of the local Girl Scouts chapter, likes horseback riding and loves a good book. She also tries to do her homework while still at school to keep time open for practice sessions and maintains high grades, her father said.

As for goals in the sport, Rachel said right now she is shooting for the British national level, and from there she&#8217;ll see where things go.