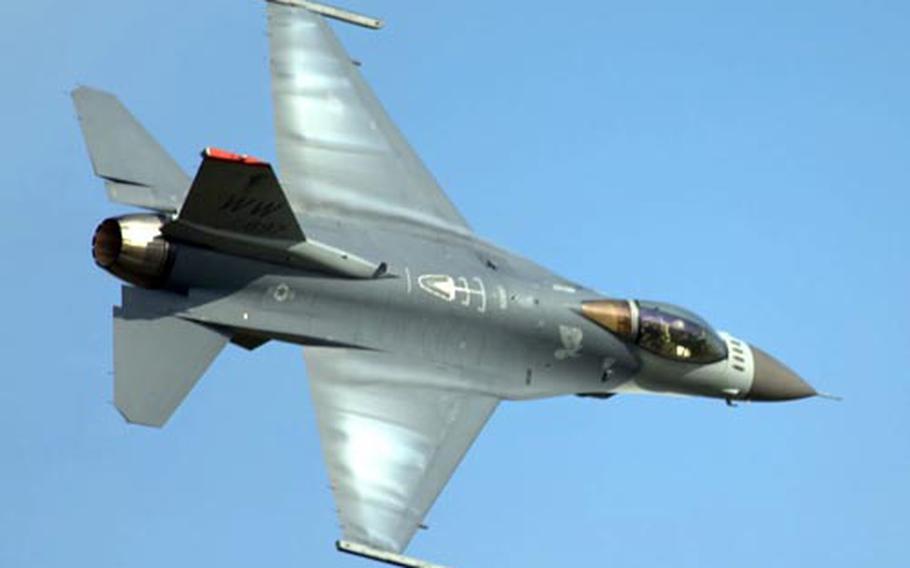 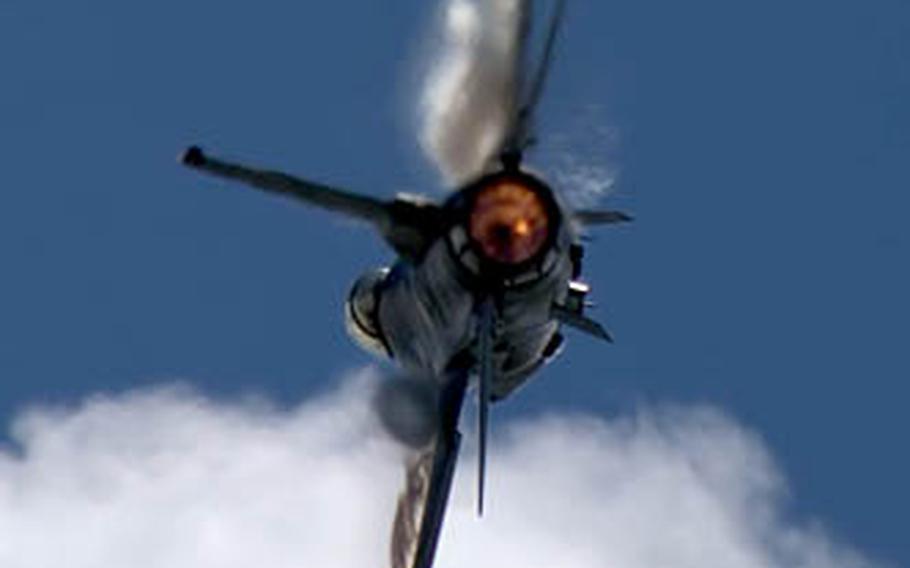 MISAWA AIR BASE, Japan - Any other F-16 pilot that tried some of the aerial tricks that Maj. Mike Briggs performs routinely would likely lose his wings.

Briggs gets paid to do maneuvers such as a Cuban 8 and Shark Tooth, at times pulling nearly nine times the force of gravity and jetting 720 miles per hour.

The demonstration team, based at Misawa, usually has about 12 members at any air show, including crew chiefs, engine and avionics specialists, a production supervisor and a safety observer.

The team typically performs at about a dozen shows per year throughout the Pacific region. In February, the crew is going to India for the second time.

Briggs was certified as the team&#8217;s pilot in May, an extra duty the 14th Fighter Squadron pilot was eager to volunteer for.

"This is my fourth consecutive F-16 assignment," he said. "I had never done anything like the demo. When the opportunity presented itself, of course, I put my name in the hat."

The PACAF team has quite a following in Asia, where attendance at shows can reach 100,000 or more and fans eagerly seek handshakes, autographs and photos, Briggs said.

Expectations are high &#8212; but Briggs rarely gets nervous, at least when his jet is soaring.

Growing up, the 34-year-old from Spring, Texas, said he liked riding roller coasters and doing big jumps on his bike with his brothers.

But the fiercest of roller coasters is like a walk in the park compared to a 15-minute aerial demonstration in the F-16, says Briggs.

Or any amusement park ride for that matter. Take, for instance, the maximum climb with aileron rolls, a maneuver in which Briggs approaches show center at a 45-degree angle before pulling straight into "90-degree, nose-high," and proceeding to do a series of aileron rolls, from about 300 feet to a maximum 15,000 feet.

"You can get a little dizzy," he said. "Usually I try to count how many rolls it is but the ground&#8217;s going by really quick."

Briggs wears a gravity suit and practices techniques to prevent blood from pooling in his body and draining from his head, which could cause him to black out.

But the greatest danger is "missing a parameter and putting an airplane into the dirt," he said.

Every maneuver has minimum altitude and air speed parameters. "If you don&#8217;t meet those, you just don&#8217;t ever do the maneuver," Briggs said.

His favorite maneuver is the Falcon Turn.

"It just looks really cool, with the after burners cooking away from the crowd, and then the turn into the crowd &#8230; to demonstrate the tight-turning capability of the F-16."

Through it all, Briggs hopes the show will accomplish an objective of demonstration teams: spark or help further cement an "interest in aviation, the military, jets and loud stuff and everything that&#8217;s cool."