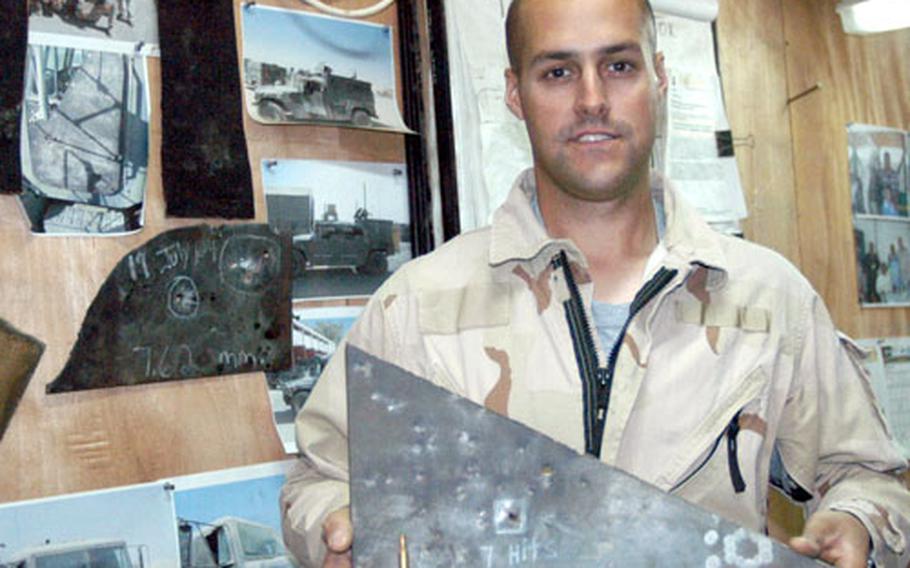 Spc. Scott LaClair, a welder and maintenance technician for the 7th Transportation Battalion’s Skunk Werks, holds a piece of Armox ballistic steel shot up by Explosive Ordnance Disposal soldiers at Anaconda. The only hole was shot seven times in the same spot. (Juliana Gittler / S&S)

Spc. Scott LaClair, a welder and maintenance technician for the 7th Transportation Battalion’s Skunk Werks, holds a piece of Armox ballistic steel shot up by Explosive Ordnance Disposal soldiers at Anaconda. The only hole was shot seven times in the same spot. (Juliana Gittler / S&S) 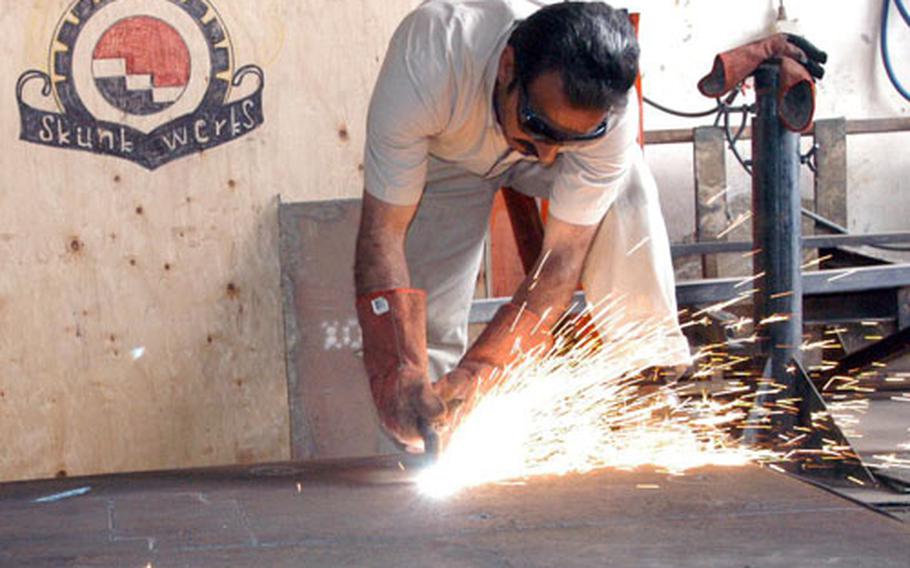 LSA ANACONDA, Iraq &#8212; Every time a convoy returns to the base, Capt. Michael DeLaughter gets nervous.

As the 7th Transportation Battalion&#8217;s maintenance officer, DeLaughter is responsible for about 1,500 vehicles. As roadside attacks intensified, it&#8217;s been his job to help create ways to guard against them.

In his small plywood office inside the maintenance area, pieces of battered and punctured steel fill the walls. They demonstrate some of the techniques his unit employs to protect its vehicles.

One sharp dented triangle is proving the most effective, a ballistic steel called Armox designed to stop small arms rounds.

His battalion has attached more than $80,000 worth of Armox to its vehicles this year.

A photo of the wreck sits on the office wall, with a collage of other mangled and wrecked vehicle images. Never wasteful, they reused the shattered Humvee&#8217;s Armox box on another vehicle, DeLaughter said.

&#8220;You see in the trucks that come in after being hit by an IED how it worked. It definitely makes it worthwhile,&#8221; LaClair said.

LaClair and his coworker, Staff Sgt. Doug Stenberg, are truck drivers for the New Hampshire National Guard and welders in their civilian lives. For that experience, they were selected for the Skunk Werks.

As truck drivers, they can appreciate the need for armor. The battalion has lost eight soldiers to convoy attacks this year. A ninth is missing.

A transportation soldier was killed in a convoy attack Wednesday, 10 miles from base. His unit was pulling supplies on a flatbed trailer.

Members of the 724th Transportation Company have driven trucks and Humvees with and without added armor.

Their Humvees now have add-on armor kits and Armox in areas where the kits don&#8217;t protect.

But the Skunk Werks inventors aren&#8217;t resting on their laurels.

As vehicles were increasingly attacked by roadside explosives this year, DeLaughter&#8217;s team went a step further.

Armox stops bullets, but as a hard steel, it can crack under the pressure of improvised explosive blasts.

This summer, two sailors attached to the Skunk Werks &#8212; both with experience working on heavy armored ship hulls &#8212; suggested an improvement. They added a layer of soft steel to the Armox to withstand the blast pressure, with rubber in between.

The EOD crew proved it worked against small arms and explosives. They called it dreadnought, named after early 20th-century armored warships. A dreadnought gunner&#8217;s box now adorns the back of most of the battalion&#8217;s gun trucks.

The trucks are evolving in other ways. The battalion&#8217;s communications unit is creating radios that allow the crew to communicate amid the clamor of battle.

At Skunk Werks, the vehicles may lack elegance, but they&#8217;re designed to work.