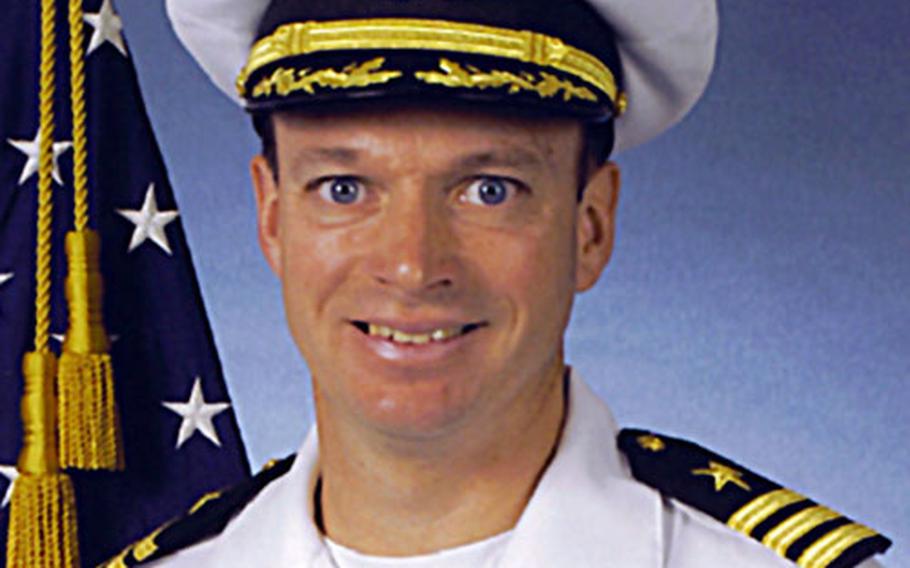 Cmdr. Kevin Mooney was stripped of his command and issued a letter of reprimand Saturday. (Courtesy of the U.S. Navy)

The commander of the nuclear-powered submarine that ran aground last month in the Western Pacific, killing one sailor and wounding dozens, was relieved of command in a quiet, behind- closed-doors hearing Saturday morning in Japan.

Cmdr. Kevin Mooney was stripped of his command and issued a letter of reprimand for failing to implement &#8220;several critical navigational and voyage planning procedures,&#8221; according to a Navy announcement after the hearing. &#8220;By not ensuring these standard procedures were followed, Mooney hazarded his vessel,&#8221; reads the announcement.

Mooney did not face criminal charges from the incident. However, receiving a letter of reprimand essentially ends a Navy officer&#8217;s career.

Cmdr. Andrew Hale, deputy commander of Submarine Squadron 15, who was given temporary command of the San Francisco as the incident was being investigated, is now the skipper.

Mooney appeared before 7th Fleet commander Vice Adm. Jonathan W. Greenert at fleet headquarters in Yokosuka on Saturday morning in what the Navy dubs &#8220;admiral&#8217;s mast,&#8221; a form of nonjudicial punishment that stops short of the criminal proceedings of a court-martial.

Skelton was unable to point to any specific evidence or exactly what standard procedures were not being followed that led Greenert to his conclusions. At issue from the beginning has been whether Mooney had access to charts that would have indicated dangerous waters in his area. &#8220;I have no details on that,&#8221; said Skelton.

Much of the Pacific Ocean&#8217;s vast and varied undersea landscape remains poorly charted and Pentagon officials have said the primary maps given to Mooney indicated no dangerous obstacles where the crash took place on Jan. 8, about 350 miles south of the submarine&#8217;s homeport in Guam.

Also unclear is what led Greenert to proceed with the admiral&#8217;s mast before the investigation into the accident was complete.

Skelton said some information had surfaced in the course of the investigation that &#8220;Vice Adm. Greenert felt ... was enough evidence to proceed to nonjudicial punishment proceedings.&#8221; Skelton said he was unaware of what that information was.

Unlike most nonjudicial hearings throughout most of the military, sailors in sea-going commands are unable to appeal orders to mast by demanding a court-martial trial if they feel the charges and adjudication are unjust.

Sources close to the case say Mooney would have preferred risking criminal conviction that might result from a court-martial, but with the right of being judged by a jury of his peers.

In a three-page letter to Greenert obtained by Stars and Stripes, Mooney&#8217;s boss, Rear Adm. P.F. Sullivan, the commander of Pacific submarine forces, made an impassioned plea for Mooney.

Although Sullivan said Mooney should be held accountable for any &#8220;questionable&#8221; practices, he praised the submarine commander for turning the USS San Francisco, which had been plagued with leadership and maintenance problems, into one of the best vessels in the fleet.

It was Mooney&#8217;s crew that was able to save the ship after the collision, despite heavy casualties. The Navy says 98 of the 137-strong crew were injured; 23 were so badly hurt they could not stand duty as the submarine slowly limped back to Guam where it is now in dry dock to see if it can be salvaged.

Juliana Gittler contributed to this report.