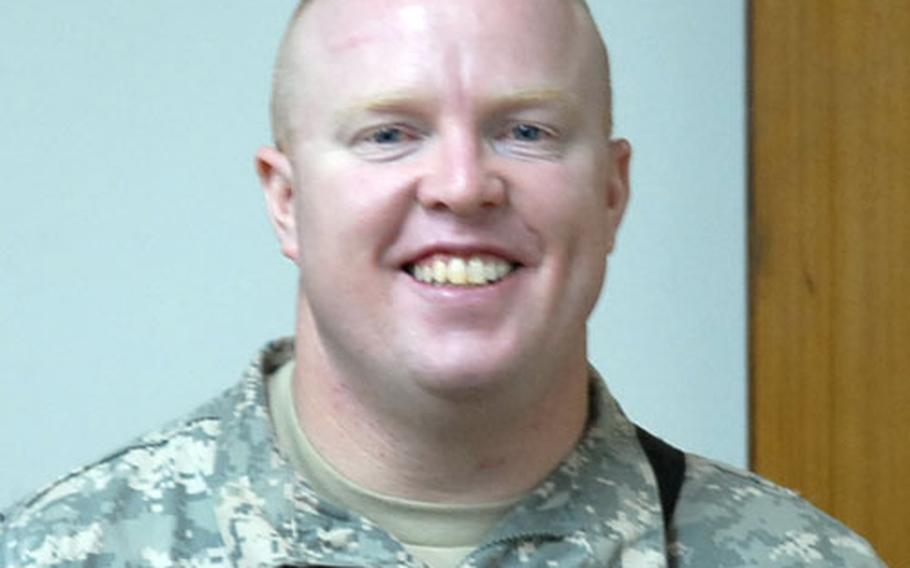 BAGHDAD &#8212; Staff Sgt. John Thomas does not give up easily. Take the courtship of his wife, Maria.

She did not feel quite the same. She refused to dance with him, did not give him her phone number and turned him down for a date.

Thomas has drawn on that sense of determination during his four years as a Marine and then switch to the Army. But the 36-year-old, who is serving with the 2nd Battalion, 5th Cavalry Regiment in western Baghdad, endured one of his biggest tests in 2004, when he first noticed a dime-sized black mark growing near his left ear.

Thomas was suffering from skin cancer and over the coming years would endure 12 operations. He would also be on the verge of losing his career in the Armed Forces, unable, he was told by doctors, to be a soldier any longer because of his illness. But Thomas not only defied doctors in holding onto his profession, he also chose to return to Iraq though he could have avoided the battlefield because of his medical history.

When Thomas first discovered a black mark near his temple he was not overly concerned. The fair-skinned Thomas had spent countless patrols out in the brutal Iraq sun but did not suspect he had cancer.

Test results showed he had cancer. He was shocked. &#8220;The hardest part was going back home and telling my family,&#8221; he said.

Skin cancer is among the most treatable, but that does not make treatment any more pleasant. The operation to remove the cancerous growth took six hours. &#8220;They cut all the cancer out and did a face-lift on the left side of my face,&#8221; Thomas said.

Thomas took prescription painkillers to shave his raw skin. &#8220;It was like shaving drunk,&#8221; he said, noting that shaving was necessary to avoid infection.

Over the coming months Thomas had precancerous growths removed from his shoulder, arm and legs. His face slowly returned to normal.

Army medical counselors said Thomas was done as a soldier because he was unable to endure long stretches of sunlight. &#8220;I just sat there in disbelief,&#8221; Thomas said. After 11 years of service, Thomas was to receive a $60,000 lump-sum disability payment, he said.

But a second medical opinion found that there were some jobs he could do as a soldier that did not require long exposure to the sun. He told his battalion commander, Lt. Col Kurt Pinkerton.

Thomas has never found out exactly whom Pinkerton contacted, but soon learned he would be able to remain a soldier.

Thomas was assigned to the rear detachment in Fort Hood, Texas, but began to get the itch to return to the field.

That desire was especially stoked when the remains of fallen soldiers would arrive home. &#8220;I would be standing over grave sites and I just thought to myself, &#8216;Why am I back here when I could be helping my fellow soldier,&#8217; &#8221; he recalls.

Thomas was cleared medically to return and approached Pinkerton once again. This past July, he was back in Iraq. His wife was opposed to it but came around, Thomas said. &#8220;She understands why I&#8217;m over here. She understands my pride,&#8221; he said. The extra wages from deployment also helped ease his finances, Thomas said.

He was assigned to a civil affairs unit that assists Iraqis in rebuilding their fractured communities. &#8220;I&#8217;m seeing a different side of the war this time,&#8221; Thomas said.

His new duties keep him out of the sun most of the time, Thomas said, but he still applies strong sunblock lotion twice a day and covers himself head to toe, including wearing gloves.

He struggles to answer, but not because of a lack of conviction.