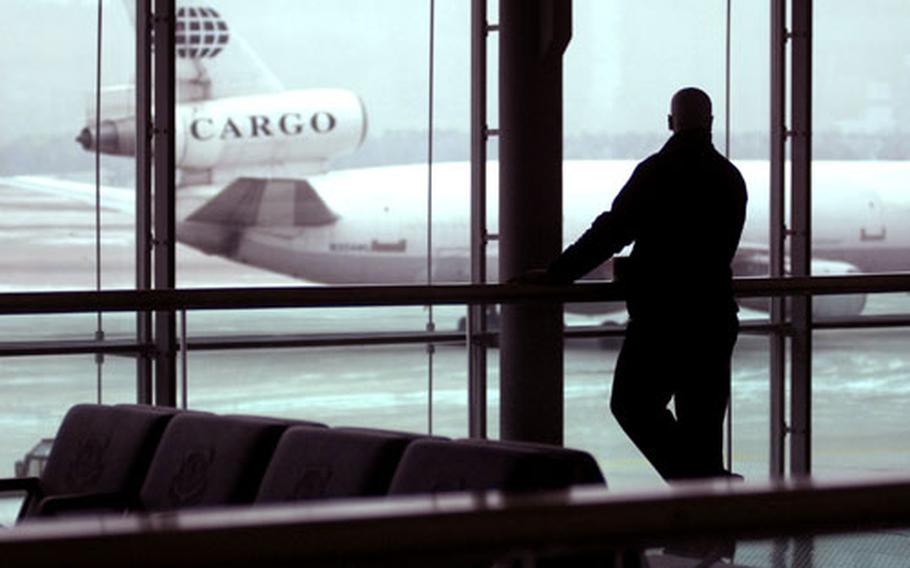 A security worker gazes out a large glass overlook to the flight line as a cargo plane taxis in on a relatively slow Christmas day at the Ramstein passenger terminal. A handful of wounded servicemembers and space-available travelers made their way through the 723rd Air Mobility Squadron’s aero medical facility and passenger terminal during the holiday. (Ben Bloker / S&S)

A security worker gazes out a large glass overlook to the flight line as a cargo plane taxis in on a relatively slow Christmas day at the Ramstein passenger terminal. A handful of wounded servicemembers and space-available travelers made their way through the 723rd Air Mobility Squadron’s aero medical facility and passenger terminal during the holiday. (Ben Bloker / S&S) 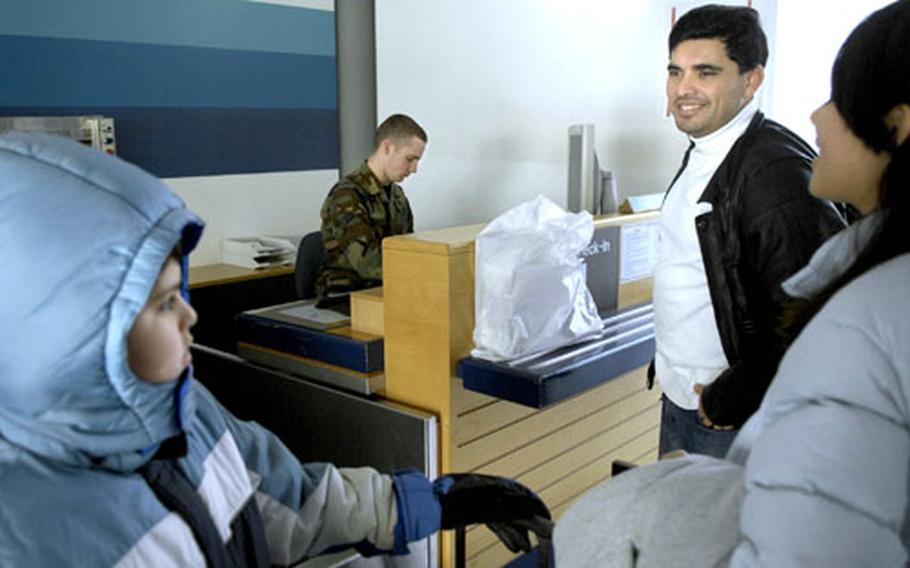 Air Force Capt. Juan Carlos Gonzalez, accompanied by children Aimee, 13, and Aaron, 9, gets a free flight to the States for Christmas as Airman 1st Class Michael Page, a passenger service agent with the 723rd Air Mobility Squadron, issues tickets at Ramstein’s passenger terminal Christmas Day. Gonzalez and his kids flew “Space A” a couple days ago from the States for a surprise European vacation. Thinking it would take all day to get a flight back to the U.S., they were excited to get a flight to Andrews Air Force Base, Md., after waiting a little over an hour at Ramstein. (Ben Bloker / S&S)

And this year was no different.

The North Carolina couple has made a tradition out of celebrating Christmas a little early with family and then catching a flight overseas with the military&#8217;s space-available, or Space-A, travel program.

It allows active-duty and retired servicemembers and their dependents to fly for free on military aircraft.

En route to Paris, the couple arrived at Ramstein&#8217;s Passenger Terminal Tuesday afternoon along with a handful of other holiday travelers.

&#8220;It can be a little hectic to get where you&#8217;re going but once you do everything is great,&#8221; said Willie, a retired Army sergeant first class who now teaches ROTC.

While flight hoppers like the Lewis&#8217; were planning excursions to the Louvre and the Eiffel Tower, others like Kristy Schoch were just trying to get home.

After visiting family in the States for two weeks, Schoch was ready to spend the second half of Christmas Day in Germany with her husband, Air Force Staff Sgt. Larry Schoch, and their 14-month-old daughter, Peyton.

Only 14 flights were scheduled, though between two and three times as many come in and out on average day, said Col. Kyle Garland, commander of the 723rd Air Mobility Squadron, which oversees the Space-A program. Garland and Lt. Col. Vernon Lucas, along with their wives and Lucas&#8217; two children, delivered homemade goodies bags to travelers and those working the holiday shift.

Airman 1st Class Joseph Fisher, like most others who worked Tuesday, had a shorter shift than usual. The 21-year-old spent his first Christmas away from home operating the terminal&#8217;s customer service counter.

&#8220;I&#8217;ve got to be here to man the phones and help people even though there aren&#8217;t so many people around,&#8221; said Fisher, who was looking forward to calling his family back home in Washington after having dinner with friends.

Of all the comforts of home, &#8220;just being around my family for Christmas is probably what I miss the most.&#8221;