Skaters on a roll at Naples’ new park 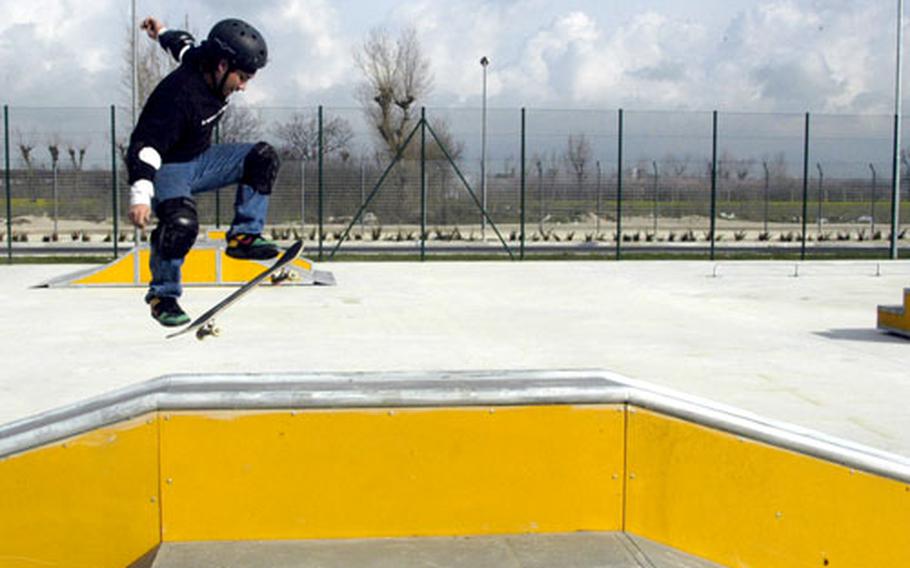 John Flores hops onto the grinding rails at the new skate park in Naples, Italy, as other skaters ride behind him Saturday. The $100,000 facility opened with about a half-dozen skaters trying out the new facility. (Jason Chudy / S&S)

The wheels officially got turning at the Naples skate park Saturday when about a half-dozen skaters got their decks rolling after an anti-climactic grand opening. The skaters, it seemed, were more interested in jumps and grinds rather than pomp and circumstance.

Ramps, grinding rails and other obstacles are spread out through the fenced-in park, which is about the size of two large tennis courts.

Not only did the kids take part in naming the park, they&#8217;re also taking part in making sure the $100,000 facility runs safely.

Naples base and safety officials held a meeting last month that drew about 30 prospective skaters, who worked with officials &#8212; sometimes grudgingly &#8212; to come to an agreement on some of the rules, including the need for skaters to have a Navy-issued pass to use the park.

The park was designed for skaters 12 and older, but teen skaters have agreed to allow exclusive use for kids under 12 between 4:30 and 6:30 p.m. on weekdays.

Skater Will Carrico said that he doesn&#8217;t worry much about the younger kids, as long as they have adult supervision. It&#8217;s the older ones he&#8217;s concerned about.

&#8220;I think the older kids are going to get hurt trying to do stuff to impress other people,&#8221; the 16-year-old said during a break from skating.

Skateboarders and in-line skaters are allowed to use the park, but bikes can&#8217;t be used on the obstacles.

Skaters &#8212; who need parental approval &#8212; must sign up with the base Morale, Welfare and Recreation Department to get a skate pass.