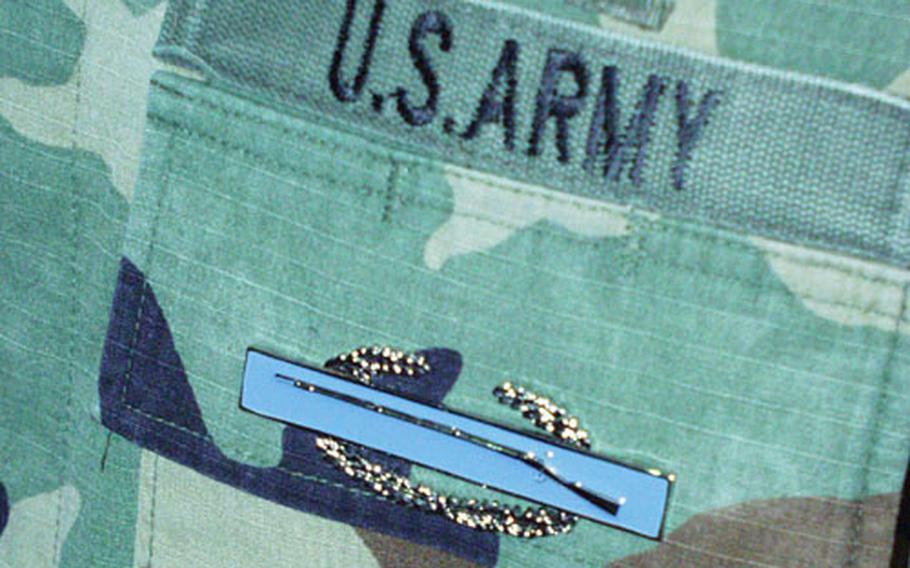 The Combat Infantryman Badge is only available to soldiers who serve in the infantry and have engaged in ground combat operations. (Kent Harris / S&S)

VICENZA, Italy &#8212; There hasn&#8217;t been a large armed conflict around Caserma Ederle lately.

But it was still deemed an appropriate place Thursday for dozens of soldiers assigned to the 173rd Airborne Brigade to receive recognition for their parts in Operation Iraqi Freedom.

More than 60 soldiers received the Combat Infantryman Badge in a ceremony Thursday at the base gymnasium.

&#8220;It&#8217;s a sign of someone willing to commit and risk their lives for the values that Americans expect their servicemembers to have,&#8221; said Capt. Ben Zweibelson, who commands the brigade&#8217;s rear detachment.

Zweibelson and all of the soldiers receiving the award spent time in Iraq and are currently assigned to the rear detachment for a variety of reasons. Many are leaving the Army or transferring to other units.

He said the command owed it to the soldiers to hold an awards ceremony, instead of just sending the medal and paperwork to their new commands.

&#8220;You can take pride that your service has been etched in the rich history of the 173rd Airborne Brigade,&#8221; he told soldiers, family members and friends gathered at the ceremony. Dozens of family members participated, helping pin on the medals.

Most of those honored Thursday jumped into Iraq in late March in the only combat jump of the conflict.

The brigade didn&#8217;t see much fighting initially, but eventually it moved south. Soldiers such as Pfc. Christopher Taffoya saw action in and around Kirkuk. Taffoya received the Purple Heart after getting wounded in a grenade attack there.

It might mean a bit more to Taffoya, because his grandfather earned the same Combat Infantryman Badge while serving in Korea. He said when they meet again in California, they&#8217;ll have something special to share.

Sgt. Nickolas Mangine said the award, one of the highest available for an infantryman, is one that soldiers in his field expect to receive when they engage in combat. And doing so is just what they&#8217;ve been trained to do.