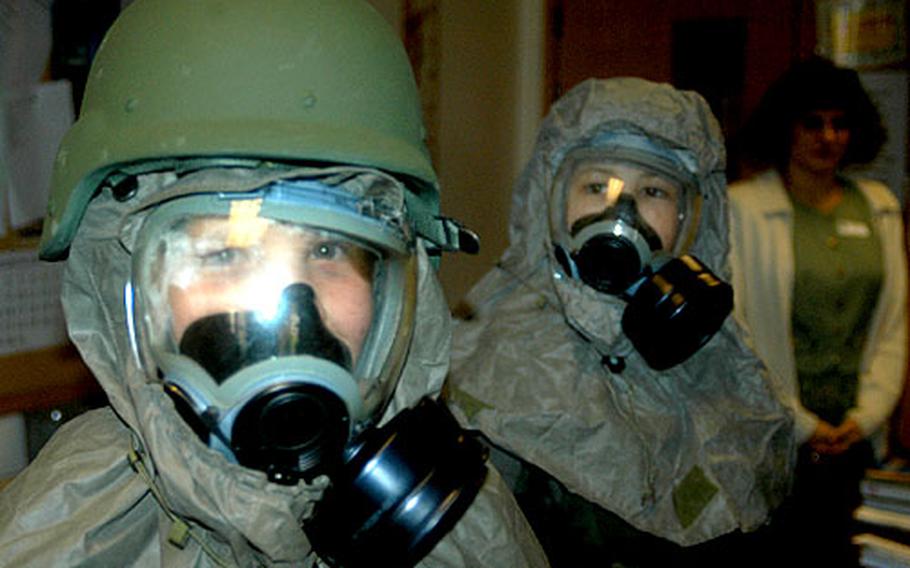 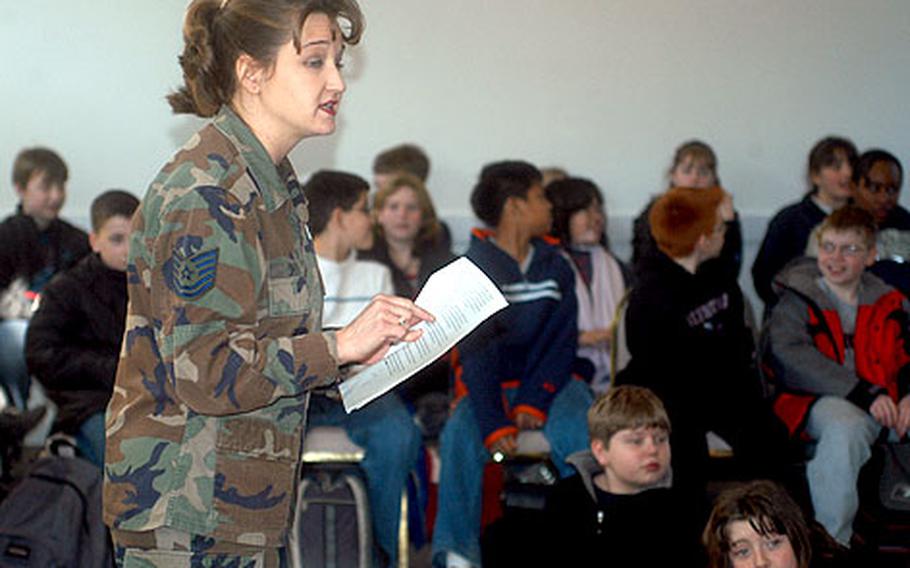 RAF FELTWELL, England &#8212; More than 100 sixth-graders prepared to join Operation Combat Care with a deployment to Far Out Air Base in Southwest Asia.

They were warned of the dangers of chemical weapons and learned how to don a protective suit. They heard tips on how to prepare their finances for a long absence.

They were told about the insects and the heat and the sandstorms that awaited them.

The pupils, of course, aren&#8217;t going anywhere. But the organizers of the mock predeployment processing held Monday hope the children go home and ask Mom and Dad a few questions.

&#8220;The whole process is kind of a mystery to them,&#8221; said Jannett Klinke, the principal of Lakenheath Middle School. &#8220;They hear their parents talking about it. This gives them a firsthand opportunity to see it.&#8221;

Some teachers said many pupils are unaware of what their military parent&#8217;s job is. Some don&#8217;t even know what unit their mother or father is in.

Tech. Sgt. Gayle Smith of the Family Readiness Center at RAF Lakenheath conceived the idea of the mock processing. When she asked how many children had parents who were deployed or about to deploy, nearly one third of the pupils raised their hands.

Moving quickly from room to room at the school, the children had four stops along the way.

Smith said she wanted to teach older children about the deployments that are so commonplace in the military. The Family Support Center has basic programs for younger children that aren&#8217;t suitable for children on the threshold of their teen years.

The middle-school pupils have a better understanding of what it means to have a parent away from home for months at a time. By giving them a taste of the predeployment process, Smith hopes it will foster more communication at home.

The presenters tried to be as real as possible. Senior Master Sgt. David Smith, of the 48th Equipment Maintenance Squadron, came equipped with a slide presentation of conditions at Far Out Air Base.

Staff Sgt. Jennifer Simmons, of the 48th Aerospace Medical Squadron, said her briefing on the dangers of everything from stray animals to sand flies was nearly the same one she would give adults.

Afterward, teachers seemed happy with the effort, which was to be repeated Wednesday for a new batch of pupils.

Jim Inge, the sixth-grade counselor, said, &#8220;I hope they have a sense of pride in what Mom and Dad are doing and the sacrifices they make.&#8221;