Sixteen servicemembers sworn in as U.S. citizens in Yongsan ceremony 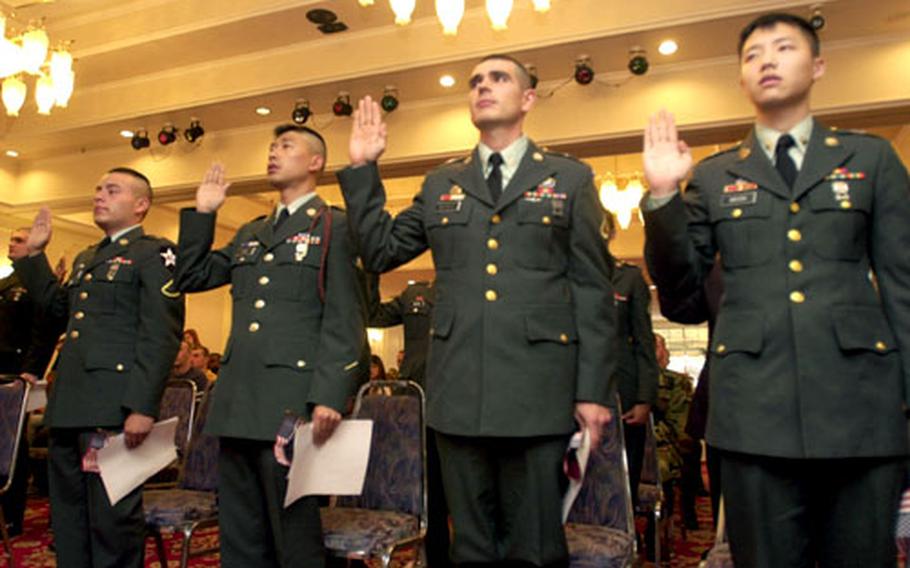 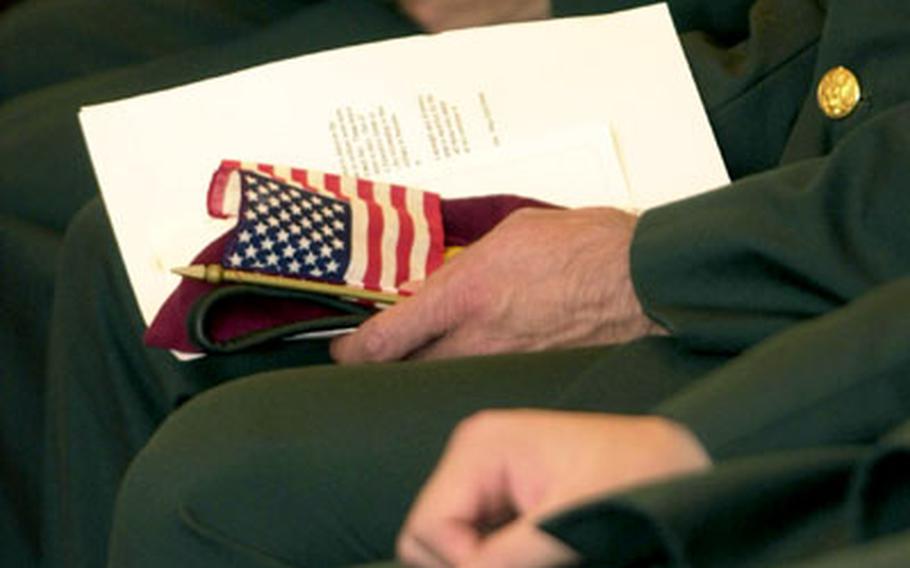 U.S. soldiers clutch small American flags, copies of the Oath of Allegiance and their naturalization papers during the ceremony at Yongsan Garrison. (Joseph Giordono / S&S)

YONGSAN GARRISON, South Korea &#8212; Pfc. Roviena Anita Francis has spent the past year defending the United States as a member of the U.S. Army. Now, she can enjoy some of the rights that she has promised to protect.

On Thursday, Francis and 15 other soldiers took the Oath of Allegiance at Yongsan Garrison and became naturalized citizens of the United States, one of the first times a U.S. citizenship ceremony has been held overseas.

Similar ceremonies have been held in recent weeks on U.S. bases in Germany and other nations; another is planned for Monday in Tokyo, officials said. In previous ceremonies, 34 servicemembers in Iraq and 17 in Afghanistan also were naturalized.

In November, President Bush signed the National Defense Authorization Act for fiscal 2004, which amended portions of the Immigration and Nationality section to allow for overseas military naturalization ceremonies. Before Oct. 1, military members could become citizens only while physically in the United States.

&#8220;There is no more fitting way for a grateful nation to demonstrate its appreciation than through granting qualified servicemembers the privilege of U.S. citizenship as quickly as possible.&#8221;

The 16 soldiers naturalized Thursday at Yongsan hail from a dozen different countries, including Cameroon, Guatemala, Guyana, Jamaica, Mexico, Peru, the Philippines, Sierra Leone, South Korea, Sri Lanka, Venezuela and Vietnam. For many of the 16, gaining citizenship was the culmination of years of effort.

For others, it represented a practical step as well.

&#8220;I feel really good because I needed to be a citizen to advance in my military job,&#8221; said Spc. Moon Duck-choon, a member of the 524th Military Intelligence Detachment at Camp Carroll.

Moon&#8217;s job requires a security clearance, and citizenship helps him in that regard, he said.

During the ceremony, the group of soldiers in dress green uniforms stood, clutching small American flags, a copy of the Oath of Allegiance and their naturalization papers in their hands.

&#8220;Throughout the history of the United States, immigrants have really built our country,&#8221; said U.S. Ambassador to Korea Christopher Hill.