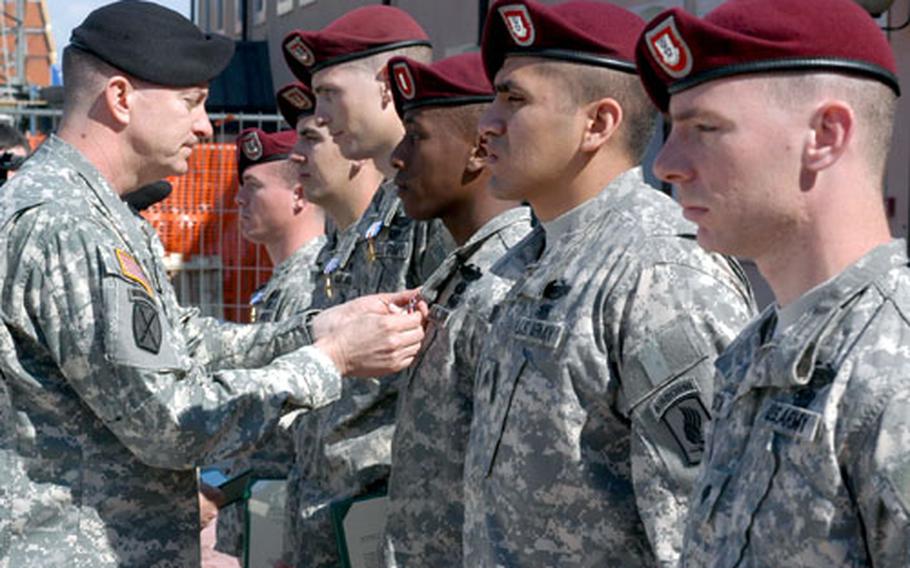 VICENZA, Italy &#8212; Six members of the 2nd Battalion, 503rd Infantry Regiment&#8217;s Chosen Company were recognized for acts of valor Friday for their parts in one of the Army&#8217;s deadliest battles in Afghanistan.

Sgt. 1st Class Erich Phillips, Spc. Jeffrey Scantlin and Sgt. John Hayes received Silver Stars, while 1st Lt. Aaron Thurman, Sgt. Hector Chavez and Spc. Tyler Hanson were awarded Bronze Star Medals with "V" device for valor. All were honored for their acts of bravery on July 13, 2008, when elements of the company were attacked by an estimated 200 insurgents at a vehicle patrol base near Wanat.

Nine soldiers from the company were killed that day fending off the attack, and that&#8217;s all those honored Friday really wanted to talk about.

"They need to be remembered," Hayes said. "We&#8217;re not interested in being spotlighted. But the fact that we lost so many of our friends. ... It&#8217;s important that all of our stories be told."

"I think there are many people who deserved it more than I do," Hayes said. "I just happened to be seen by someone who wrote up a narrative and nominated me.

"None of us would ever seek an award. But through this, if we can put the focus on other people who deserve recognition and the guys who died, I guess it&#8217;s a good thing."

Soldiers from the battalion and other elements of the 173rd Airborne Brigade paused for a moment to remember the fallen soldiers before the ceremony began. Then they listened as Maj. Gen. William Garrett, commander of the Southern European Task Force, said soldiers from the brigade displayed courage throughout the 14 months they spent in Afghanistan.

"Certainly on that day, individual acts of courage were commonplace," he said. "[Soldiers] took the fight to their enemies and drove them back. They won the day."

Phillips, who previously had been presented with the Distinguished Service Cross for efforts earlier in the tour, received his second high honor Friday. But he and Chavez chose not to comment. That left it to the other four to talk about the battle.

"There were still a few people waking up," Scantlin said. "But the majority of people were locked and loaded and that probably made a difference at the beginning of the attack."

Members of the company had come under fire dozens of times during their year in Afghanistan. And many of those at Wanat initially thought that was the case again.

"They usually just are trying to piss us off. Shoot a few times, then run away," Hayes said. "These guys were trying to kill us."

"There was explosion after explosion," Scantlin said.

Soldiers found whatever cover they could. There wasn&#8217;t much. The U.S. compound consisted mostly of military vehicles parked roughly in a circle. It was set adjacent to the village, with a makeshift watch tower set a short distance away. The first enemy attacks targeted that tower, the mortar pit and the command center. One soldier died in the mortar pit. Eight others were killed at the tower or on their way to reinforce the position.

Much of that had already occurred by the time that Thurman and other soldiers arrived as part of the first responders. A small convoy had to race up a narrow dirt-and-gravel road from the 2nd Battalion, 503rd Infantry Battalion&#8217;s headquarters at Camp Blessing. It took 30 minutes. But Thurman said there was plenty of fighting left that day. He and most of his remaining platoon &#8212; the others were already on their way back to Italy &#8212; advanced through the village, taking out enemy positions along the way. Like the other soldiers honored, he said many other soldiers in the company deserve credit for their actions that day.

He said he recalls several incidents of that day very vividly. But he could say that as well about a number of battles the company was involved in during the conflict.

"In some ways, it was just another day," he said. "Obviously, it was very different, though, because nine of our guys died."