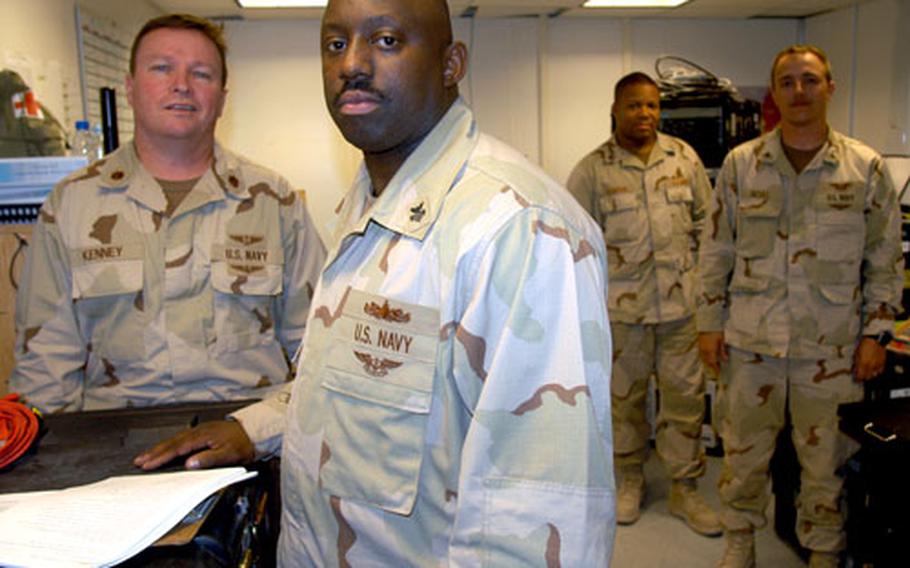 KANDAHAR AIRFIELD, Afghanistan &#8212; In the elusive hunt for enemy fighters in Afghanistan, Navy surveillance aircraft have a small group of ground-based allies.

Unit personnel also provide pre-mission planning and post-mission debriefs to the crews, as well as ensuring that anything the aircraft does detect and record is quickly sent to military commanders.

Navy P-3 Orions have flown over Afghanistan since early in the war, using their onboard imaging and electronics systems to provide bomb damage assessments and locate enemy troops.

They&#8217;ve even followed vehicles and, when enemy fighters got out of one vehicle, relayed their location to nearby ground troops, according to a Navy press release from 2003.

But without the MOCC, information couldn&#8217;t easily get to commanders. So when the P-3s deploy to remote areas, so does a MOCC.

And that mobility, Kenney explained, is the key to the unit&#8217;s operations.

The active-duty unit deployed to the Central Command area of operations with its normal 14-man contingent, Kenney said, but only six currently remain in Afghanistan.

Kenney&#8217;s MOCC detachment is also supporting P-3 operations in the Horn of Africa and a handful of its sailors are working with the Navy&#8217;s 5th Fleet maritime surveillance headquarters in Bahrain.

Petty Officer 2nd Class Danny Scull, who deployed from the Jacksonville Tactical Support Center, said that he&#8217;s worked with MOCCs in Rota, Spain, and in the Balkans.

While assigned to Patrol Squadron 16 in the late 1990s, Scull&#8217;s aircraft worked with a MOCC to track the Russian submarine Kursk, which later sank off Norway.

TSCs are based at certain Navy commands worldwide, and when Navy P-3s deploy somewhere where there isn&#8217;t a permanent naval presence, such as in Afghanistan or Africa, one of the eight MOCCs are called to deploy.

MOCC crews normally do between three- and four-month deployments to remote areas and also cover shorter exercises or operations while in Jacksonville.

Petty Officer 1st Class Ray Sibby, a communications specialist who&#8217;s been with the unit for three years, has deployed to Rio de Janiero, Brazil, for exercise UNITAS, and has done operational deployments to Souda Bay, Crete, and now Afghanistan.

Having a number of responsibilities is typical for MOCC personnel, he said.