Six bases in Iraq to produce their own drinking water 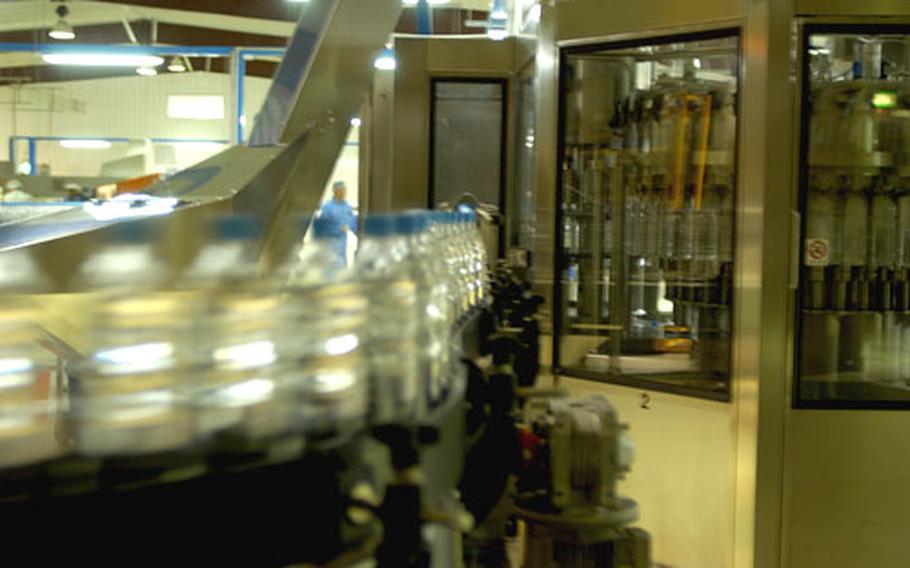 Bottles speed by at the water plant at Camp Anaconda, which produces water for the camp and surrounding bases. Six major U.S. bases in Iraq are expected to be producing their own drinking water by summer, military officials said. (Jeff Schogol / S&S)

CAMP ANACONDA, Iraq &#8212; Six major U.S. bases in Iraq are expected to be producing their own drinking water by summer, cutting an estimated 20,000 trips by trucks from Iraq&#8217;s dangerous roads each year, according to the managers of the water distribution plant at Camp Anaconda.

The move is not intended to turn Camp Anaconda into a permanent base, said Maj. Michael Clancy, engineer for the 3rd Corps Support Command at Anaconda. The unit is headquartered in Wiesbaden, Germany, and is the Army&#8217;s only forward-deployed corps support command.

Since October, the plant at Anaconda has produced more than 20 million bottles of water for the camp and surrounding bases, taking 23 trucks off the road each day, managers said.

Camp Anaconda produces its own water by pumping it out of a canal and purifying it through trailer-mounted water purification units, Clancy said.

&#8220;There is nothing permanent about these, they could be broken down and moved easily within 24 hours (probably less),&#8221; Clancy wrote in a Tuesday e-mail to Stars and Stripes. &#8220;The bottled water plant is a slightly more robust structure, but it too is temporary in nature, it&#8217;s really just a prefab metal shell that could be disassembled and moved quite easily.&#8221;

He stressed that Camp Anaconda is not being built to be a permanent base, explaining that the only permanent buildings on the base are those inherited from the Iraqis.

&#8220;We&#8217;ve recently canceled several projects, including a $9.8 million permanent water purification facility, that would have constructed permanent facilities &#8230; [we] will either make do with what we have (in most cases) or construct something expeditionary (modular, pre-fab),&#8221; Clancy wrote.

The commander of the air wing at Balad Air Base, which is part of Camp Anaconda, said he did not know how long the air base would continue to operate, but said it would likely be the last of the four air bases under his command to close.

Balad is the second busiest single runway operation in the world, next only to Heathrow International Airport in London, said Brig. Gen. Frank Gorenc, commander of the 332nd Air Expeditionary Wing.

Gorenc said U.S. Central Command Air Forces will likely need Balad Air Base until the end of the eventual withdrawal of U.S. troops.

&#8220;Most likely the services of Balad will have to remain, if not for anything for the Air Force field hospital. It&#8217;s one of the two largest hospitals in Iraq, and that facility is going to have to be somewhere,&#8221; Gorenc said.