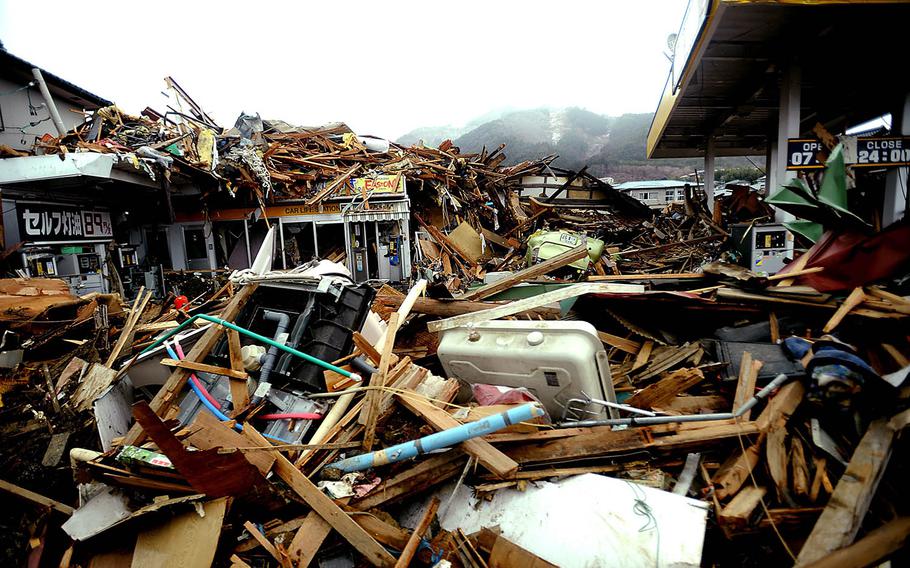 Debris and wreckage is piled up on March 16, 2011, in Ofunato, Japan, after a 9.0 earthquake hit Japan on March 11 that caused a tsunami that destroyed anything in its path. (Jeremy Lock/U.S. Air Force)

Debris and wreckage is piled up on March 16, 2011, in Ofunato, Japan, after a 9.0 earthquake hit Japan on March 11 that caused a tsunami that destroyed anything in its path. (Jeremy Lock/U.S. Air Force) 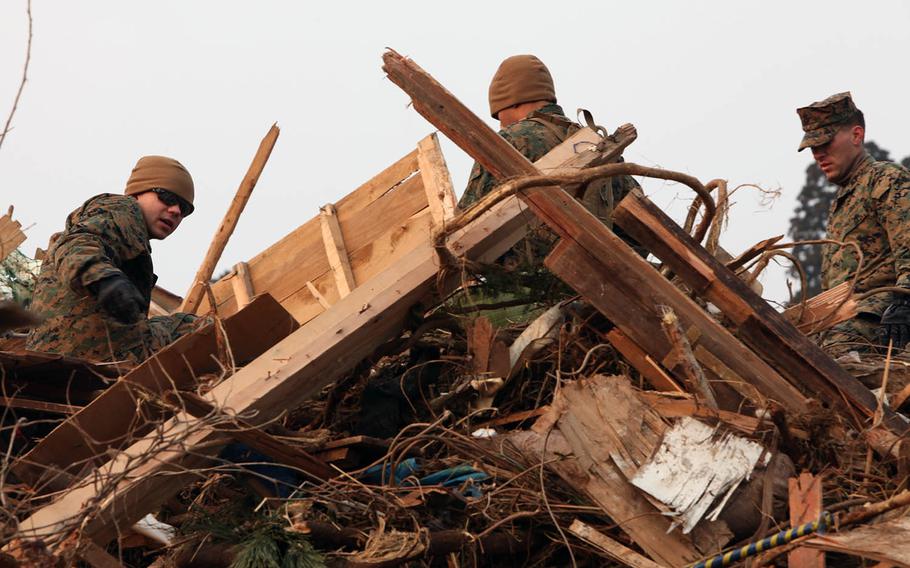 Sirens rang out Monday at Misawa Air Base, home of the Air Force’s 35th Fighter Wing in northeast Japan, marking the eighth anniversary of a devastating earthquake, tsunami and nuclear disaster that killed more than 15,000 and spurred a relief operation involving 20,000 U.S. servicemembers.

On March 11, 2011 a 9.0-magnitude earthquake set off a destructive tsunami that hit the Tohoku coast, traveling 6 miles inland in places, causing widespread destruction and the release of radioactive plumes from the damaged Fukushima Daiichi Nuclear Power Station.

Operation Tomodachi — the U.S. effort to help Japan deal with the aftermath of the disaster — involved sending servicemembers into coastal communities to help locals deal with the destruction.

At Misawa, the closest U.S. base to the disaster zone, sirens sounded at 2:46 p.m. — marking the time that the earthquake struck — before personnel observed a minute’s silence.

“We are proud to serve alongside our Japanese counterparts and always prepared to help our partners in times of need,” officials said on Misawa’s Facebook page.

People stationed there at the time of the disaster responded with comments about their experiences.

“It was a really difficult time, but I was really proud to see the way the base came together to support our families and our off-base communities,” wrote Mike Dashler, who said he was a member of the 35th Operations Group from 2010 to 2011.

Others shared photographs of troops working in the field, a Marine’s radiation dosimeter, damaged cars and buildings and donated supplies.

Japanese media reported that 52,000 people who lost their homes in the disaster are still living in shelters.