Buy Photo
Bart Tippets, a Vietnam War veteran from Utah, pauses during a speech Monday, Dec. 5, 2016 in front of hundreds of other veterans. He said he joined the Veterans for Standing Rock movement because of its message of nonviolence. (Nikki Wentling/Stars and Stripes)

Buy Photo
Bart Tippets, a Vietnam War veteran from Utah, pauses during a speech Monday, Dec. 5, 2016 in front of hundreds of other veterans. He said he joined the Veterans for Standing Rock movement because of its message of nonviolence. (Nikki Wentling/Stars and Stripes) 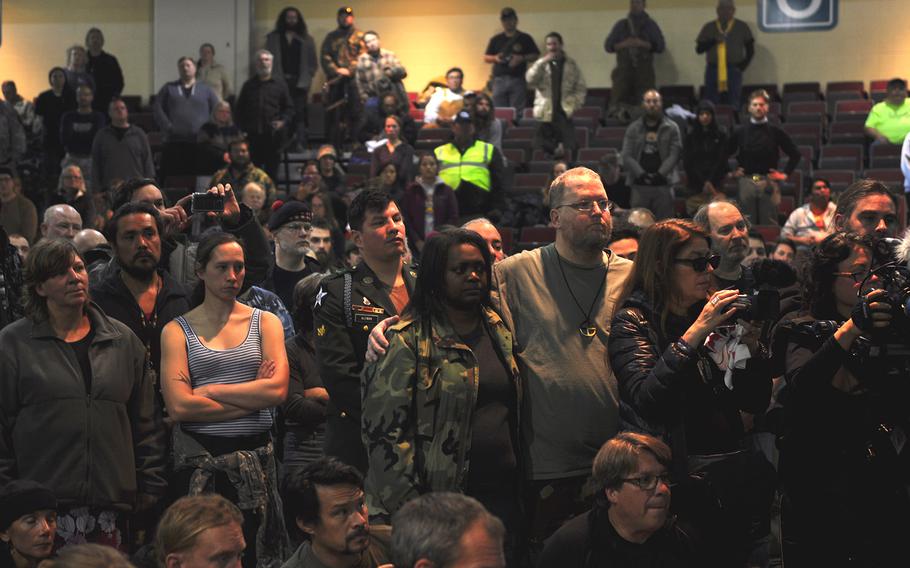 Buy Photo
Veterans listen to tribal elders, who talked to them about the Standing Rock protest Monday, Dec. 5, 2016. (Nikki Wentling/Stars and Stripes) Buy Photo
Wes Clark Jr., an organizer of Veterans for Standing Rock, hugs a member of the Standing Rock Sioux tribe during a gathering of veterans and tribal elders Monday, Dec. 5, 2016. (Nikki Wentling/Stars and Stripes)

CANNON BALL, N.D. — Leaders of a camp of protesters fighting the construction of an oil pipeline being built on the Standing Rock Indian Reservation asked everyone to go home Monday.

Monday was the eviction deadline set by the U.S. Army Corps of Engineers for oil pipeline protesters, including thousands of veterans, to leave the camp. But despite the deadline, heavy snowfall and harsh winds forced many of them out anyway.

After the announcement to leave, some veterans gathered around fires at the camp, eating scrambled eggs and discussing their next move. Many of them, including about a dozen veterans from San Diego, talked about staying.

Leaders of the veterans group, called “Veterans Stand for Standing Rock,” thought they would continue their plan to stay and help at least until Wednesday. But as the weather worsened Monday, the Standing Rock Sioux leader asked them to leave.

The Army Corps on Sunday halted the construction of the Dakota Access Pipeline under Lake Oahe on the Sioux reservation, saying it would perform an environmental study and consider other routes for the pipeline. Protestors for months have claimed the pipeline could contaminate the tribe’s drinking water and damage cultural sites.

Archambault had told NPR that the thousands of non-Sioux who joined the camp helped bring worldwide attention to their cause.

The veterans’ registration tent reported 1,500 veterans had checked into camp as of Monday morning. A spokesman for the group said about 2,500 veterans joined the protest, and other estimates from group leaders reached as high as 4,000 veterans.

On social media, Wesley Clark Jr. – who arranged the veterans’ effort – thanked the veterans who showed up and said he wanted to arrange for another mission, tackling another cause.

Veterans were in among the hundreds of vehicles that lined up at the exit of the Oceti Sawkowin Camp on Monday afternoon, as inches of snow piled up on and around tents and made passage in and out of the site difficult. The National Weather Service issued a blizzard warning that would last through Tuesday afternoon.

Before their exodus, several hundred veterans traveled to the nearby Prairie Knights Casino and Resort, where tribal elders talked to them about the protesters’ mission.

The core of Standing Rock Sioux who formed the camps and are now living there are planning to stay. Energy Transfer Partners, the company behind the Dakota Access Pipeline, said in a statement after the halt that they still planned to build the pipeline along the planned route.

“We take each day, day by day,” said Faith Two Eagles, one of the protest leaders. “It’s a chess game with [Energy Transfer Partners] and DAPL. It’s a huge chess game of power.”

Some veterans voiced some of their reasons for being there.

“I think the biggest thing that really moved me to this movement is when I took the medevac out of [Vietnam], those images keep on going in my mind, and I said to myself, ‘There has to be another way,” said Bart Tippets, a Vietnam War veteran from Utah. “I am tired of war. I saw this movement of nonviolence, the veterans coming together.”

Michael Wood Jr., a veterans group organizer, said in a video statement that it was a “logistical nightmare.”

They hadn’t expected that many veterans, they said, and lines of communication weren’t well established. The thousands of veterans were scattered throughout different areas of camp, and not all of them got word of the event at Prairie Knights Casino and Resort.

Army veteran Hollie Olin of Billings, Montana, said the veterans’ movement lacked organization – but it was worth it, she said.

Olin talked with another female veteran outside the casino as snow fell. They were planning their trip home.

“It was short notice, and there were a lot of us. Even then, we all came out to support and that’s what we did,” Olin said. “As a veteran, I joined the military for a reason. I wanted to protect people. It really does come down to we’re protecting our people.”