Sinking their teeth into a new profession

Vivienne Rosario, left, watches her training partner, Felicia Moore, place a small metal clamp over a set of teeth. The exercise was part of a 40-hour dental assistant training program offered by the American Red Cross at Camp Foster, Okinawa. “I wanted to gain a skill that I could use where I went, because people have teeth everywhere,” Moore said. (Natasha Lee / S&S)

Vivienne Rosario, left, watches her training partner, Felicia Moore, place a small metal clamp over a set of teeth. The exercise was part of a 40-hour dental assistant training program offered by the American Red Cross at Camp Foster, Okinawa. “I wanted to gain a skill that I could use where I went, because people have teeth everywhere,” Moore said. (Natasha Lee / S&S) 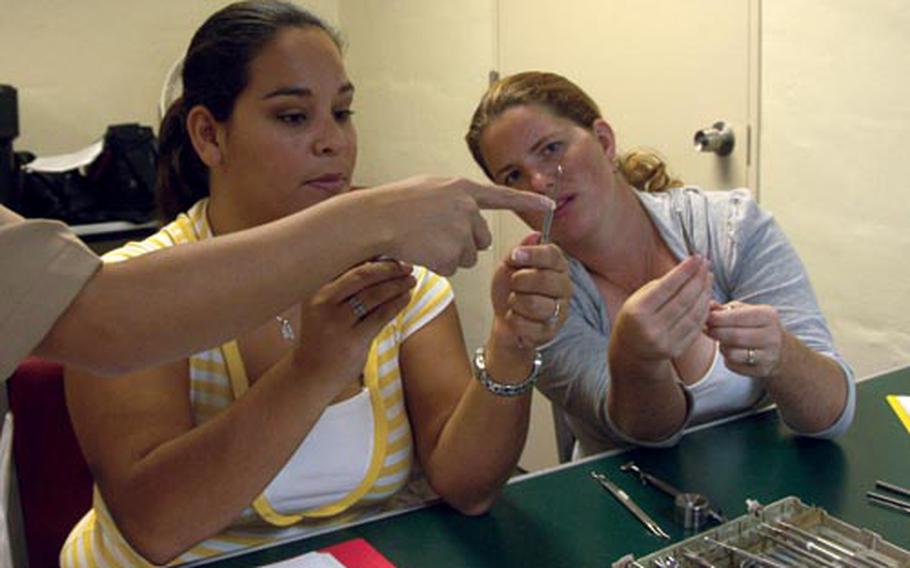 Dental assistant trainees Saira Artolacq, left, and Rene Cashion identify instruments during an exercise. Artola and Cashion, both married to Marines, will be tested on dental tool identification before they head to their internship at dental clinics. (Natasha Lee / S&S)

CAMP FOSTER, Okinawa &#8212; Bad breath, gingivitis and those scraping noises produced when a prickly steel probe meets tooth and gum all come with the job.

Kimsey and 13 other military dependents spent Wednesday morning getting acquainted with the excavators and syringes they will disinfect and hand to dentists during routine check-ups and root canals.

The training is their first step toward becoming volunteer dental assistants through an American Red Cross program.

It&#8217;s rigorous &#8212; trainees complete a 40-hour course followed by 500 unpaid internship hours with the 3rd Dental Battalion at base clinics around the island.

But it&#8217;s free. And it&#8217;s a launching pad toward career opportunities for military dependents, who often encounter hurdles while searching for jobs overseas.

Felicia Moore, 36, figures she&#8217;s saving about $7,000 in school expenses &#8212; the cost of a vocational technical program she checked out in Georgia. That&#8217;s money she can eventually put toward dental hygienist training.

With her 15-year-old son living with family in Georgia and her finances in order, Moore said she was able to reduce her work hours at the Yellow Box at Camp Kinser to handle the 500 hours she must complete by January.

Dental assistants are in demand.

According to the U.S. Bureau of Labor Statistics, it&#8217;s one of the fastest-growing jobs and employment is expected to jump nearly 30 percent by 2016. The bureau reports more than 283,000 dental assistants are practicing in the States.

Halquist said working alongside dentists exposes trainees to more than just cleaning instruments and scheduling appointments. Trainees learn how to take radiograph X-rays, handle fillings, and in some cases do molds and change out dental brackets on braces.

The program is a non-licensed course, which means participants must obtain state licensure if they enter the civilian work force.

But graduates typically find jobs at military dental clinics stateside and overseas, where licensing is not always a requirement, Halquist said.

Graduates receive a certification from the Red Cross that is accepted at all military bases, Halquist said.

The program is offered in the spring and fall at Camp Foster.

Depending on experience, military dental assistants can earn between $10 and $12 an hour, Halquist said.

According to the BLS, the national average salary is $32,280.

Dental assistant Risa Exinia, a Japanese civilian, was hired at the Bush Dental Clinic on Camp Courtney after completing the program last year.

Juggling the 500 internship hours and a family wasn&#8217;t easy, but Exinia said the hard work paid off.

Now, her main challenge is soothing children suffering from toothaches.

Navy Cmdr. David Lowrey, dental clinic director at camps Hansen and Schwab, said he&#8217;s been impressed by the enthusiasm and skill among the trainees.

The added manpower keeps the appointments and treatments running efficiently, he said.

"They certainly help fill the void when one of our active-duty technicians deploys or transfers," Lowrey said. "We would often have difficulty meeting our mission without them."