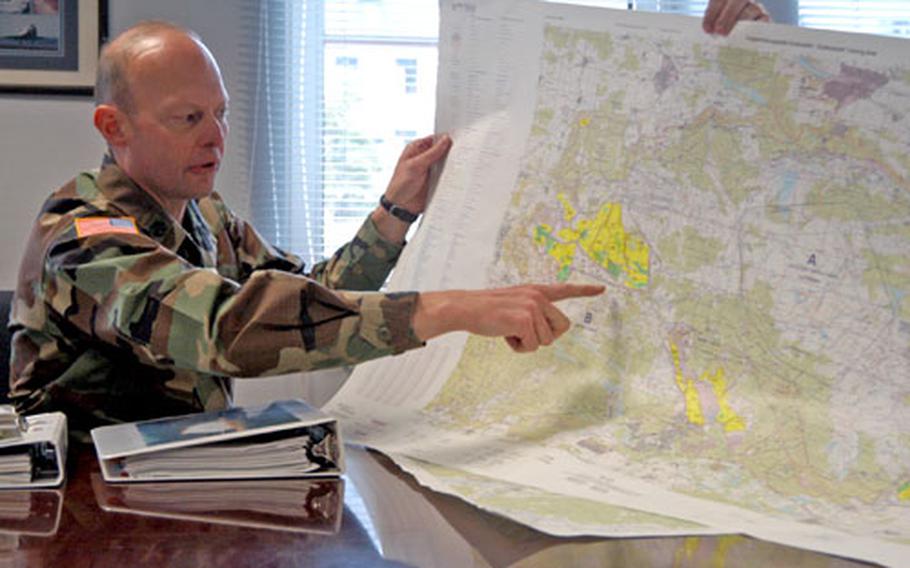 BAUMHOLDER, Germany &#8212; Since a fatal 2002 training accident in which a soldier drove his tank into a quicksand-filled hole, U.S. Army officials have been trying to find out how much of a threat Grafenw&#246;hr Training Area itself poses to the soldiers.

An initial geological study of the area indicates that threat is substantial.

&#8220;Absolute safety cannot be guaranteed anywhere on open terrain, in particular if this has a karst subsurface,&#8221; German engineers wrote in a report commissioned by the Army.

Karst structures evolve over millions of years as ground water eats through limestone, forming underground water reservoirs and even entire cave networks. As the water cuts deeper into the limestone, the earth&#8217;s surface gets weaker and sinkholes may appear.

According to the report, Grafenw&#246;hr is riddled with sinkholes, some of which are expanding, even causing trees to tilt as the ground gives out beneath them.

In November 2002, Spc. Jonathan Stehle died after his 68-ton M1A1 Abrams tank sank into a hole at the training area during a maneuver exercise. Stehle died of a combination of drowning and hypothermia in rising water after rescuers could neither free him, nor extract the tank.

But holes are just one hazard.

The preliminary report by the Mainz-based Wolf Blumenthal Ingenieurb&#252;ro &#8212; dated January 2004 and given to Stars and Stripes by Stehle&#8217;s family &#8212; states that Grafenw&#246;hr&#8217;s liabilities are myriad &#8220;to include topographic depressions (e.g. sinkholes), subterranean cavities (caves, mining galleries, cellars), wetlands and areas where a high ground-water level may exist&#8221; near the accident scene.

Ultimately, the question is whether Grafenw&#246;hr &#8212; one of four future Army hubs in Europe &#8212; is the best place to maneuver heavy armored vehicles such as tanks, Bradley fighting vehicles and the service&#8217;s new Stryker infantry vehicle.

&#8220;You&#8217;d be asking &#8230; for a yes or no to a question that doesn&#8217;t have a yes-or-no answer,&#8221; said Col. Roger King, public affairs officer at U.S. Army Europe headquarters in Heidelberg. There is no perfect place for training, King said, with every maneuver area having unique drawbacks.

Army officials downplayed some of the report findings, saying warnings that absolute safety cannot be guaranteed on open terrain are standard clauses in such reports and are meant to decrease consultant liability.

Dr. Heinrich Schoger, Wolf Blumenthal project manager for the report, declined to discuss report specifics from his office in N&#252;rnberg, stating that the research is too complex to explain in a phone interview.

However, Schoger said, the consulting firm is independent and the report findings, while open to interpretation, &#8220;are the way we see it from the technical and scientific evidence.&#8221;

Further, King and other Army officials emphasize that Stehle&#8217;s accident was the first in 50 years where geology played a role.

&#8220;Grafenw&#246;hr is a safe and effective place to armor maneuver,&#8221; said Lt. Col. Robert Shoemaker, range commander for the 7th Army Training Center, which is headquartered at Grafenw&#246;hr.

But Stehle&#8217;s family says that Army officials have not been forthcoming about the accident, nor proven they are working to make the area safer.

When she compared a copy of the report given to her under the Freedom of Information Act against an uncensored copy given to her by an Army source, she realized Army officials had deleted 12 pages of information from her original copy, Storrie said in phone interviews from her home in College Station, Texas.

USAREUR officials say that information was omitted from the family&#8217;s copy because that data has been carried over to a broad study of the training area, and that study is not yet complete.

The deleted information, mostly from interviews with German forestry officials at Grafenw&#246;hr, included documentation of long strings of sinkholes near the accident, as well as across the training area.

Just how widespread the unstable areas are remains to be determined, and the geology report&#8217;s findings are open to interpretation.

Because of the weight and vibration of the tank, &#8220;the structure of the soil collapsed instantly like a house of cards,&#8221; wrote Matthias Schreiner, a Wiesbaden-based geologist and groundwater expert commissioned by Stars and Stripes to interpret the report&#8217;s findings.

More ground water was released instantly, &#8220;and the already soft ground was transformed into a liquid mush into which the tank sank fast,&#8221; Schreiner wrote.

However, a Corps of Engineers official said she doesn&#8217;t believe Stehle&#8217;s tank went into a sinkhole, or broke through the surface.

The Army began investigations immediately after the accident, said King and Shoemaker.

Wolf Blumenthal&#8217;s study initially was confined to the western portion of the training area where the accident occurred, King said. But Army officials decided to expand that study to the entire training area, he said, with the full report scheduled to be complete later this year.

The initial Wolf Blumenthal report ends with a recommendation for more research and monitoring.

Because of the geological nature of the area, hazards could appear at any time, the report stated.

Only about 20 percent of free-maneuver exercises, such as the one in which Stehle died, are conducted at Grafenw&#246;hr, Shoemaker said.

However, King and Shoemaker emphasized that the Army is pursuing all training area hazards, with 150 people searching the range, as well as assessing the 550 anomalies.

The entire range is not unstable, &#8220;and I think people can map these areas,&#8221; said Stripes consultant Schreiner.

The Army does everything it can to avoid soldiers taking unnecessary risks, King said.

&#8220;However, everything we do balances risk against perceived reward in that if you don&#8217;t perform (training) missions as realistic as possible, then the benefit of the training is lessened.&#8221;

&#8220;The outcome of unrealistic training is improperly trained soldiers going to war. Which definitely increases their risks.&#8221;

A hydro-geological survey commissioned by the Army refutes a finding that Spc. Jonathan Stehle died when he drove his tank into an unmarked, water-filled fighting position abandoned from a previous training cycle.

But what the survey doesn&#8217;t answer with absolute certainty is whether the accident was caused by an existing hole or the earth collapsing under a tank.

The Army&#8217;s initial accident report, known as a 15-6, stated Stehle died after he drove his tank into an unmarked, water-filled fighting position abandoned from a previous training cycle.

But the geological study &#8212; completed by the Mainz-based Wolf Blumenthal Ingenieurb&#252;ro for the Europe District of the U.S. Army Corps of Engineers &#8212; indicates that Stehle&#8217;s 68-ton M1A1 Abrams tank sank into the rain-soaked earth. Then water from an underground water formation called an aquifer flooded the hole.

Army officials counter that the accident report was never meant to be the final word. The officer who did the investigation was not a geologist, and the report was a quick assessment of what happened, completed only days after the November 2002 accident, said Col. Roger King, U.S. Army Europe public affairs officer.

The 15-6 also mentioned the possibility of a sinkhole, King noted.

However, the 15-6 report devotes far more attention to problems with inadequate recovery equipment and pumps that couldn&#8217;t drain water fast enough to allow Stehle&#8217;s head to remain above water.

And indeed, extreme weather played a role in the accident, as Grafenw&#246;hr had received an unusually high amount of rainfall at the time of the accident, according to the report.

The geological report states &#8220;an unfavorable conjunction of severe wetness and a very high groundwater level evidently led to a loss of stability of the very moisture-sensitive colluvial (soil) at this site.&#8221;

That is, Stehle&#8217;s tank dropped into a quicksand-filled hole. Whether it was a sinkhole &#8212; a hole where the surface had collapsed because of weak underlying geological structures called karst &#8212; is open to debate. But they are a feature of the area.

Several German forestry officials told the researchers of sinkhole fields including a string of sinkholes 1 kilometer long and 300 meters wide, with sinkholes up to 50 meters in diameter.

&#8220;Some sinkholes within that field are still active; this is clearly discernible by inclined trees, whereas others have evidently been inactive for a longer period of time,&#8221; the report stated.

Ariel photos indicate about 550 &#8220;anomalies,&#8221; or sites that may also be weak ground or sinkholes, according to the report.

Army and Corps of Engineer officials emphasize the version of the Wolf Blumenthal report given Stars and Stripes was not final, and it&#8217;s too early to determine what impact the investigations around Stehle&#8217;s accident will have.