Single soldiers back from Iraq often met by empty fridge, not excited family 2nd Lt. Lorren Pogson, 24, returned to Germany from a seven-month deployment to the Middle East last week. Like many single soldiers, she had no family there to greet her on on her homecoming. (Steve Liewer / S&S)

2nd Lt. Lorren Pogson, 24, returned to Germany from a seven-month deployment to the Middle East last week. Like many single soldiers, she had no family there to greet her on on her homecoming. (Steve Liewer / S&S) 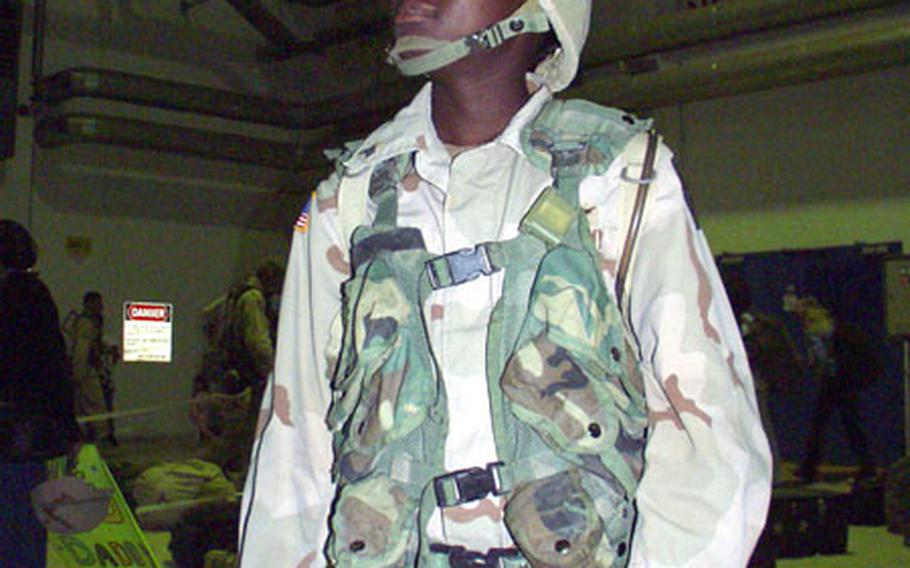 Sgt. Annishia Henry, 25, returned to Germany from a seven-month deployment to the Middle East with the 2nd Squadron, 6th Cavalry Regiment last week. Like many single soldiers, she had no family there to greet her on on her homecoming. (Steve Liewer / S&S)

ILLESHEIM, Germany &#8212; Sometimes, when Johnny comes marching home again, there is no family there to give him a hearty welcome.

Hundreds of single soldiers have come home to Germany in the past few weeks after months of training, then war-fighting, in Kuwait and Iraq. They march into cavernous auditoriums filled with banners, balloons, bands, and cheering loved ones, all waiting to smother dads, moms, husbands, wives with hugs and kisses.

The single soldiers watch all this, and then walk home to a dark, empty room.

The families of soldiers based in the United States often can fly to the soldier&#8217;s base to be part of the welcome-home celebration, but few families can afford the trip to Europe.

At the base in tiny Illesheim, the fast-food stores had closed before the 2-6 Cavalry&#8217;s homecoming ceremony ended around 9:30 p.m. After a journey from Kuwait that lasted nearly 24 hours, single soldiers faced the prospect of nothing more to eat than a stick of beef jerky or an ice-cream bar from the base&#8217;s convenience store.

Still, no one in the 2-6 Cavalry &#8212; married or single &#8212; was anything but happy to be home. They left Germany last October as the leaves were changing and landed in muggy Kuwait City, where the temperatures still routinely topped 110 degrees.

For months they trained relentlessly, around the clock, for the invasion of Iraq that no one doubted was coming. After moving from Ali Al Salem Air Base to the remote new Camp Udairi in late January, they could not e-mail loved ones and could phone only rarely.

In early February, the rest of the Illesheim-based 11th Aviation Regiment joined them at Udairi. On the morning of the war&#8217;s second day, March 21, they endured a miserable three-day convoy to their desolate new camp six miles from An-Najaf, Iraq. They stayed five weeks, till the end of war, then returned to Camp Udairi to wait for a ship, and for airplane flights home.

Several soldiers said the final month in Kuwait dragged on. The unit had nothing to do and wanted only to get back to Germany.

A few 2-6 Cavalry soldiers returned to Illesheim a week earlier, along with about 100 soldiers from the base&#8217;s maintenance support unit, the 7th Battalion, 159th Aviation Regiment, who had deployed with them last fall.

Their loved ones still have received no word on when those units might come home. Most skipped the 2-6 Cavalry&#8217;s homecoming &#8212; but not Gayle Braley, whose husband commands the 7-159th Aviation and is still in Iraq.

Then the families, waiting behind ropes in the squadron&#8217;s huge hangar, came rushing out to greet their loved ones. The single soldiers watched for a few minutes, then stepped into the next room to pick up their packs and trudge back to their empty rooms.