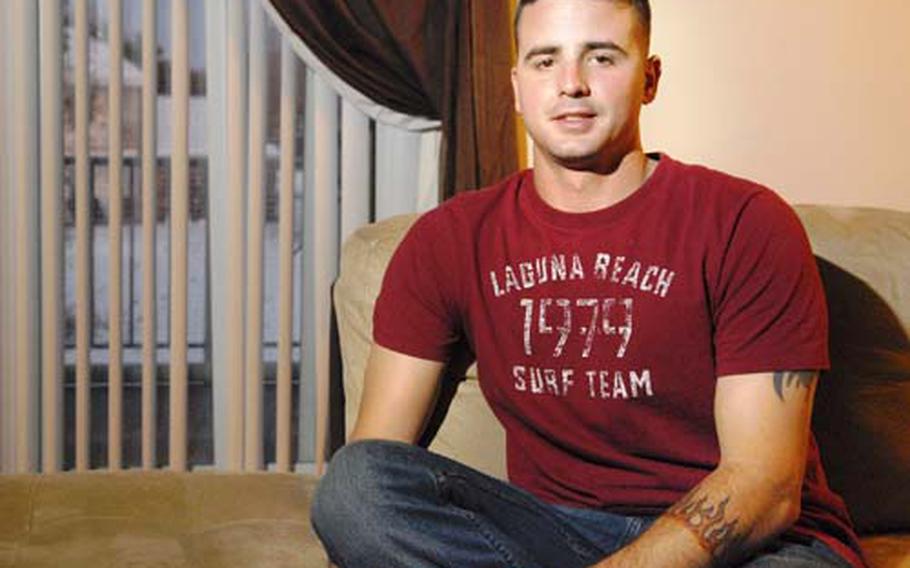 Pfc. Philip Vance poses for a portrait in his apartment near Watertown, N.Y., in 2008. Vance’s son, Quenton, is currently living with his parents in Missouri. (Ben Bloker / S&S)

PREVIOUS STORY:When home is as scary as war

But being the sole parent of a 3-year-old boy? That proved much more difficult, as he thought it might.

Being responsible for Quenton, whom he had left with his parents 14 months earlier, &ldquo;scares me more than combat or bombs,&rdquo; Philip, a combat medic, said when he returned from his deployment.

But he was determined to do it. The toddler arrived in March, five months after Philip returned. Philip&rsquo;s parents brought the boy from their home in Missouri to their son&rsquo;s apartment near Fort Drum.

They stayed for a time, then returned home without the grandson they had come to love and wanted to keep.

&ldquo;When we left, it was very difficult,&rdquo; said Jay Vance, Philip&rsquo;s father. &ldquo;We left a trail of tears heading out of Watertown.&rdquo;

But for Philip, seeing his son again was &ldquo;wonderful ... He was so much bigger than I remembered.&rdquo;

Philip, 24, became a single parent in a singularly traumatic event that was far worse than anything that happened in Iraq, he said: His then-wife tried to take her own life, with a scalpel drawn across her throat, in a room at the Fort Drum Inn shortly before his deployment.

Philip, a former construction worker, saved her life with the skills he&rsquo;d learned in his medic training. The two divorced, Philip got custody of Quenton and, after arranging with his parents to care for the infant, left for Iraq with his unit.

He didn&rsquo;t have to deploy, but he wanted to. It seemed like the right thing to do.

Considering all of that separation and trauma, Philip said, Quenton adjusted well to being reunited with his father.

&ldquo;He knew who I was. Call it divine intervention &mdash; he just knew.&rdquo;

Now Philip is trying to figure out how to do all the right things, no matter how difficult.

&ldquo;What kind of man would I be if I let someone else take care of my own son?&rdquo; said Philip, who was himself reared by his father, and later a stepmother, after his mother left the family when he was a boy.

So many things about Quenton made Philip happy to be together with him.

&ldquo;He&rsquo;s so smart, and we were talking to each other all the time,&rdquo; Philip explained. &ldquo;I was giving him a bath one night and he started spelling out the letters on my shirt. I love the fact that he&rsquo;s so attentive and that he picks up on things so quickly.

But the reality of Philip&rsquo;s stressful situation soon began to intrude &mdash; training 12 hours a day, going into the field, paying a big chunk of his salary to the teenage wife of a friend for baby-sitting.

After six weeks, &ldquo;it became apparent to all of us it would be impossible,&rdquo; Jay said. &ldquo;Quenton didn&rsquo;t adapt all that well to the baby sitter. He wasn&rsquo;t happy. It was just difficult all the way around.

&ldquo;Philip agreed it would be better if he&rsquo;d come back with us,&rdquo; Jay added. &ldquo;You know, I do believe Philip wants very much to be a good parent. I just think it&rsquo;s very difficult as a single parent at the beck and call of the Army.&rdquo;

&ldquo;I didn&rsquo;t really want to do it,&rdquo; Philip said of letting his son go back with his parents. But he had to. The baby sitter quit after a dispute about a car seat, and he had no backup.

For Philip, Quenton&rsquo;s return to his grandparents&rsquo; care is temporary, just until he settles in at his new duty station. He recently re-enlisted for six years, but part of the deal he made was to be posted at the Fort Benning, Ga., medical command, as a health care specialist &mdash; and nondeployable for three years. &ldquo;It&rsquo;ll be a lot of paperwork and administrative stuff,&rdquo; he said.

He&rsquo;s hoping to get stable hours and good child care and be a hands-on father to Quenton. And he also plans to pursue a bachelor&rsquo;s degree in psychology.

&ldquo;How many single mothers are out there? I just have to do what it takes.&rdquo;

Philip&rsquo;s father remains skeptical that a young soldier with so many competing duties can provide what a toddler needs.

The grandparents are also struggling with what the right thing is. They love their son and admire his wanting to be a responsible father, yet worry about the stress he was under while trying to care for Quenton. Still, Jay noticed that Quenton &ldquo;seems to really like being with Philip.

&ldquo;[Quenton] does seem to love him,&rdquo; he said. &ldquo;It could have been a whole lot worse, that&rsquo;s for sure.&rdquo;

And they love their grandson, who calls them &ldquo;Nana&rdquo; and &ldquo;Papa,&rdquo; and want him with them.

&ldquo;While Quenton was gone, we really missed him more than we thought we would,&rdquo; Jay said. &ldquo;He&rsquo;s happy, we&rsquo;re happy. We&rsquo;d be happy to maintain the status quo for the foreseeable future.&rdquo;

So the family is sort of back at square one, with no one quite sure what will happen or how they&rsquo;ll manage.

Eight months after returning home, with a long-distance romance he&rsquo;d maintained in Iraq over, with so much tragedy behind him and so many responsibilities ahead, Philip sometimes feels discouraged.

&ldquo;I feel very old sometimes,&rdquo; he said. &ldquo;Some days you just feel like you have nothing left.&rdquo;