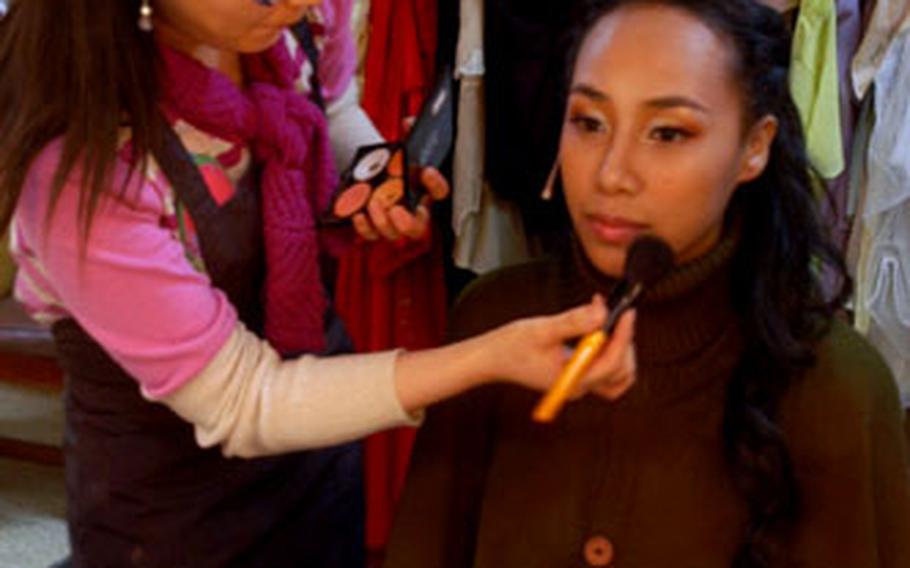 Sonya has her makeup done backstage before a performance of “Carmen” on Wednesday. (Seth Robson / S&S)

CAMP RED CLOUD, South Korea &#8212; To western eyes and ears, there is little that separates South Korean singer Sonya from the hundreds of other Asian pop stars who flash across television screens on the peninsula.

But any South Korean can tell immediately she is Amerasian, her manager, Kim Dong-jin, told Stars and Stripes as he waited for his 26-year-old prot&#233;g&#233; to go on stage during a Wednesday afternoon performance of the musical &#8220;Carmen,&#8221; which runs until Nov. 21 in Seoul.

Sonya, whose real name is Kim Son-Hee, was born to a South Korean mother and a black American soldier stationed at Camp Walker in Daegu for five years during the 1970s.

She never knew her father, who returned to the United States when she was three days old. She hardly knew her mother, who died of cancer when Sonya was 7. Her grandmother raised her in poverty.

Sonya does not speak English and does not like to talk about her childhood. But, as she waited for makeup at the Little Angels Theatre in Seoul, she recalled childhood visits to Camp Walker with other Amerasian children from Daegu.

At school, her pure South Korean classmates teased her for being Amerasian, she said.

&#8220;But if you are confident in yourself you can overcome any difficult circumstances,&#8221; the diminutive pop princess said, adding that as an Amerasian she has the ability to express the best parts of both cultures.

Her career as an entertainer began after talent scouts spotted her singing at high school.

By 1999, at 19, she made her first television appearance. In 2003 she was the female lead, Lucy Harris, in the musical &#8220;Jekyll & Hyde,&#8221; a performance that earned her Best New Female Actress recognition at the 2003 South Korean Music Awards. That year also saw an emotional reunion, brokered by a South Korean television show, with her father. He&#8217;s now a car salesman in Raleigh, N.C. Her latest and fifth album, &#8220;A New Life,&#8221; is topping the charts in Japan, Kim said.

&#8220;At that time all the Amerasian kids were treated really bad,&#8221; he said. &#8220;They were looked down upon. South Koreans did not regard them as Korean, even though they were Korean citizens. It was a huge challenge to make her a star.&#8221;

The environment for Amerasians in South Korean is improving as global culture spreads to the peninsula, the manager said, but the entertainment industry remains an uphill road for them.

&#8220;Realistically, most producers are very reluctant to accept Amerasian kids into their programs. I still have a very hard time getting Sonya on television,&#8221; he said.

Uncountable numbers of Amerasian children of U.S. servicemembers live in South Korea today. Many received no financial support from their fathers, who returned to the United States after their tours, Kim said.