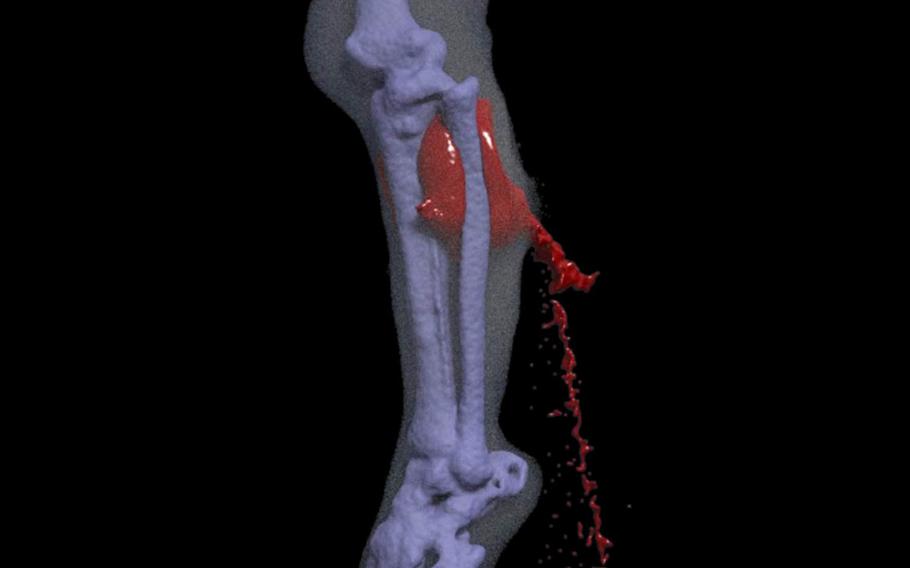 A still clip taken from a computer simulation of a leg wound designed by the Center for Advanced Surgical and Interventional Technology at the University of California, Los Angeles. The goal of the simulation is to give field medics initial training on an anatomically, physically and mathematically accurate model of various leg wounds. (Courtesy of UCLA)

A still clip taken from a computer simulation of a leg wound designed by the Center for Advanced Surgical and Interventional Technology at the University of California, Los Angeles. The goal of the simulation is to give field medics initial training on an anatomically, physically and mathematically accurate model of various leg wounds. (Courtesy of UCLA) 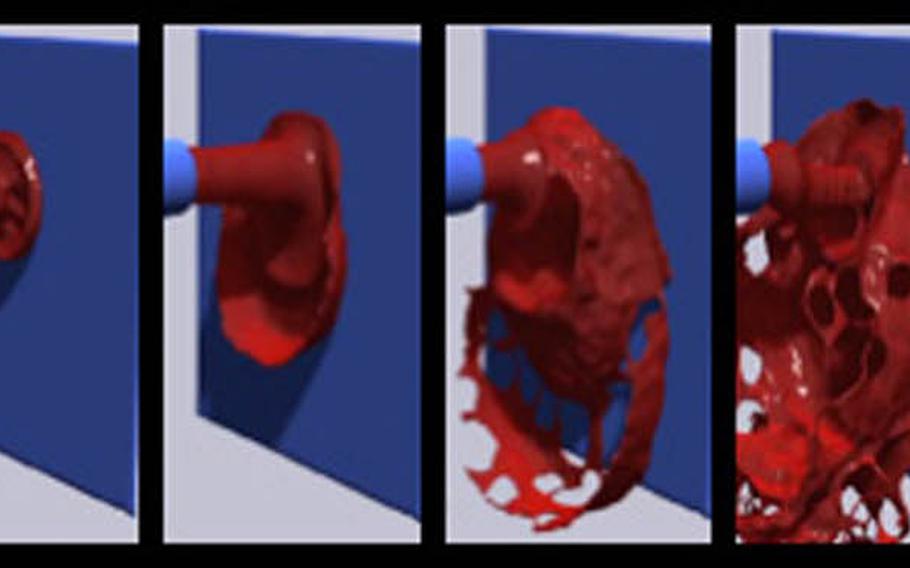 This illustration demonstrates how blood from a severed artery reacts when it hits a barrier. Simulating dynamics such as this are what researchers at the University of California, Los Angeles, say could help new field medics quickly learn about treating various leg wounds. (Courtesy of UCLA) 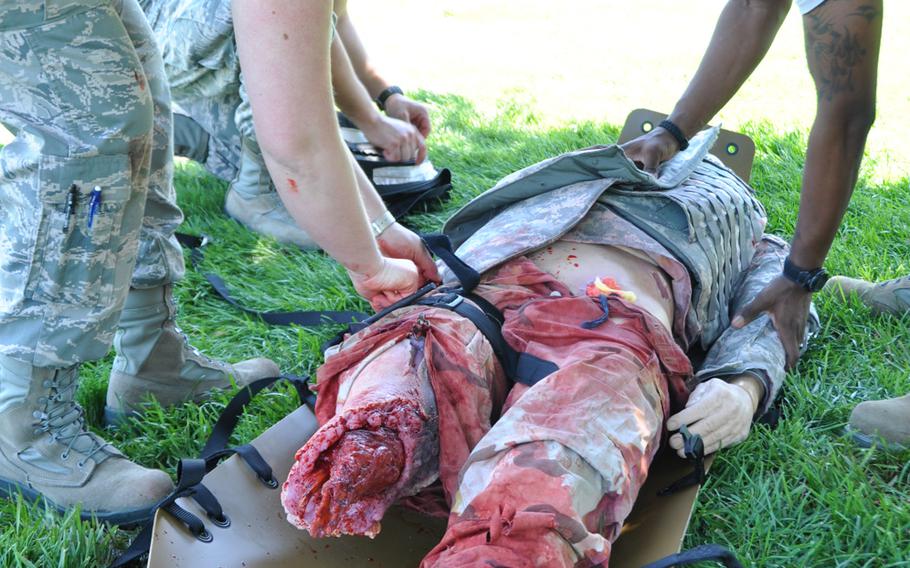 For years, military medics have had to use lifelike dummies to train for battlefield limb injuries. Now, researchers at UCLA are developing a computer simulation of a leg bleeding from a puncture wound, such as from shrapnel or a gunshot that they hope will provide more realistic training. Air Force photo (Air Force photo)

On-the-job training for military medics comes at a high cost.

The trauma they see downrange often requires split-second decisions that could mean life or death for a wounded warfighter.

To better prepare medics for these real-life situations, researchers at UCLA have created a prototype model computer simulation of a leg bleeding from a puncture wound, such as from shrapnel or a gunshot.

The goal is to give field medics initial training on an “anatomically, physically and mathematically accurate model” of various leg wounds, said Dr. Erik Dutson, a surgeon and executive medical director of UCLA’s Center for Advanced Surgical and Interventional Technology. The work is sponsored by the Office of Naval Research.

The researchers were driven in part by the Pentagon’s announcement a few years ago that, starting in 2015, the military would curtail the use of live animals for combat trauma training, a practice long decried by activists. The Pentagon called for the use of more — and improved — simulations for training.

Injury simulations have been around for more than 15 years, Dutson said, but they have been relatively unsophisticated, offering images and movements that didn’t factor in the myriad functions of a wounded body — blood pressure, shock, heart rate and the nature of blood spillage and coagulation.

But the center’s researchers have painstakingly developed algorithms based on data from 3D coordinates, CAT scans and MRIs to re-create a virtual wounded leg.

“We’ve used physics-based mathematics and fluid dynamics to actually illustrate what would happen if there were various projectile or blast injuries to the leg,” Dutson said.

Previous simulations were created as “the best estimate” of how a wound appears, he said.

“When you look at the virtual work that’s been done up until now, it’s not based on actual CAT scans or MRIs or actual anatomy,” he said. “It’s based on a cartoon.

“But in those cases there’s never any bleeding during surgery or any problem. The representation of bleeding was not truly based on how fluid actually acts, not taking into account the human circulatory system, not taking into account the various pressure heads of different sides of arteries, arterials and veins. We’ve managed to combine all of that. It’s probably as accurate as you can get for this type of work so far.”

The researchers began with a simulation of the leg for practical reasons. First, they’d already crunched data for previous projects on the leg, so they had a head start. Second, limb wounds have been the scourge of American troops in the past 15 years. Through 2014, 1,645 troops had suffered a major limb amputation as a result of a battlefield injury, according to the Defense Department.

“We figured that this was a good starting point because of the pattern of injuries coming back from Iraq and Afghanistan,” Dutson said. “They’re getting hit by improvised explosive devices.

“The last two major conflicts have seen an enormous rate of amputations and traumatic injuries due to extremity injuries. That’s because the torso and head tend to be well-padded, but extremities are not. These are people who would have died in the old days, for sure, but they still end up losing limbs because of blood loss and tissue damage.”

“Leg injuries are particularly difficult to treat since different points of entry cause different levels of blood loss,” he said in a Navy news release.

The new simulation can accurately mimic those variations. A penetrating leg wound with entry and exit points can be something that’s simply painful or it can be a life-threatening hemorrhage, Dutson said.

“A medic is not necessarily going to appreciate what they’re faced with by looking at a hole in the skin,” he said. “We have the opportunity to give them the entire spectrum of experience based on the outside looking like it’s not something serious at all.”

The simulation can be easily manipulated to create an array of wounds, some of which a working field medic might not see so often and thus not be prepared to treat.

The simulation is interactive, with a learner facing various scenarios. At each step, a decision is required, “sort of a multiple choice test based on high-fidelity visual imagery and a change of scenario of vital signs and circumstances,” Dutson said. “The whole thing keeps changing, and they have to go from scenario to scenario to scenario.”

The researchers have gotten some negative comments from specialists in the field of trauma who’ve looked at video of the prototype simulation and said, “This doesn’t look real to me,” he said.

The finished simulation, Dutson said, will create that reality by depicting “blood as the true tissue it is.”

“Blood has a gazillion different cells in it,” he said. “It has a very sophisticated coagulation cascade that involves 12 or 13 steps anytime there’s any type of injury. What we’ve been simulating so far has basically been something that has the molecular density of blood but it’s an inert fluid as opposed to blood, which is a living tissue. So we want to incorporate the coagulation factors and the altering natures of blood in the next go around. At that point, it will be very hard to distinguish the simulation from an actual injury.”

The researchers are ready to move onto that final phase of the simulation.

“Ideally, what we’d like to do is get this in the hands of experienced field medics and some trainee field medics,” he said.