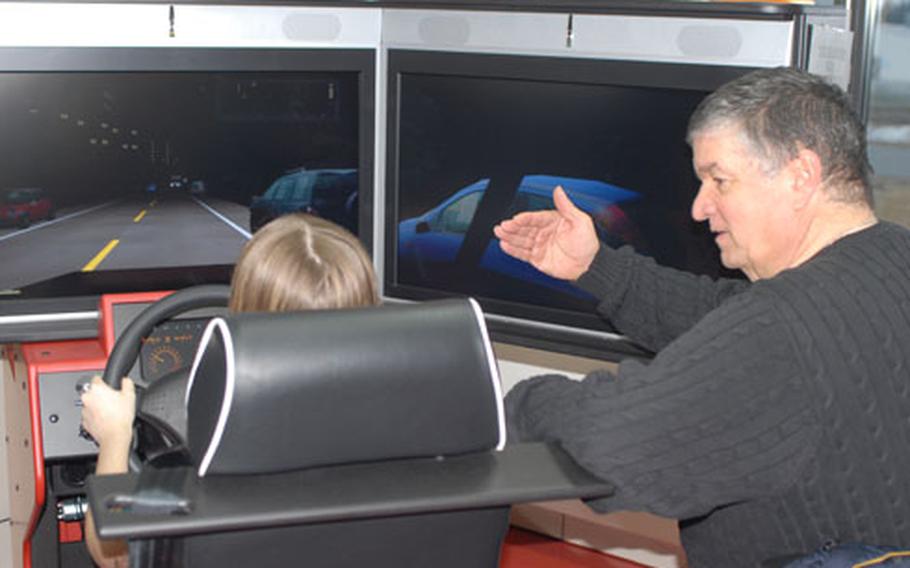 GRAFENW&#214;HR, Germany &#8212; The car skidded to a halt, narrowly missing deer that had darted into the road as the trainee driver breathed a sigh of relief.

Teenagers preparing to get their U.S. Army Europe driver&#8217;s licenses are experiencing that scenario and plenty of other challenging situations behind the wheel of computer driving simulators at bases all over Europe. The Installation Management Command-Europe began the driver&#8217;s training program late last year to prepare youngsters for the USAREUR test, which requires drivers to understand European road rules and street signs.

IMCOM-E school transition specialist Brenda Coffield said Wednesday that driving classes are offered at Army bases in Kaiserslautern, Wiesbaden, Grafenw&#246;hr, Baumholder and Stuttgart in Germany; at Vicenza, Italy; and in Belgium. Driving simulators are installed at Bamberg and Mannheim, but classes are not held because instructors are not available.

The Air Force runs the same program at Ramstein Air Base in Germany, while the Navy has driver&#8217;s classes at Rota, Spain, and plans to purchase two more driving simulators, Coffield said.

During her turn behind the wheel, Vilseck High School student Anna Muzzy, 16, of Olympia, Wash., avoided the deer but soon found herself traveling the wrong way down a one-way street before she collided with another vehicle.

Mollo looked calmer than an instructor would have been if the driving had been in a real car.

"In a real vehicle, you feel the weight of the car. You don&#8217;t feel that here, but the scenarios are the same," he said.

The classes, which have run at Grafenw&#246;hr&#8217;s Netzaberg Youth Center since December, started with a lot of book work to teach the students German road signs, he said.

Students who get their licenses in the U.S. need to be aware of the different driving conditions in Europe, Mollo said.

"In Germany, drivers go super fast on the back roads compared to the States," he said, adding that there are also many stretches of the German highway that don&#8217;t have speed limits.

One of Mollo&#8217;s students, Kimberley Morris, 18, said the classes are excellent preparation for the USAREUR test.

She&#8217;s already taken 2,000 euros&#8217; worth of German driving classes and practiced driving on side roads and in parking lots with her parents.

The Savannah, Ga., native said she can&#8217;t wait to get a license so she can drive a Ford Focus her parents gave her to go to and from her on-post job at Burger King.