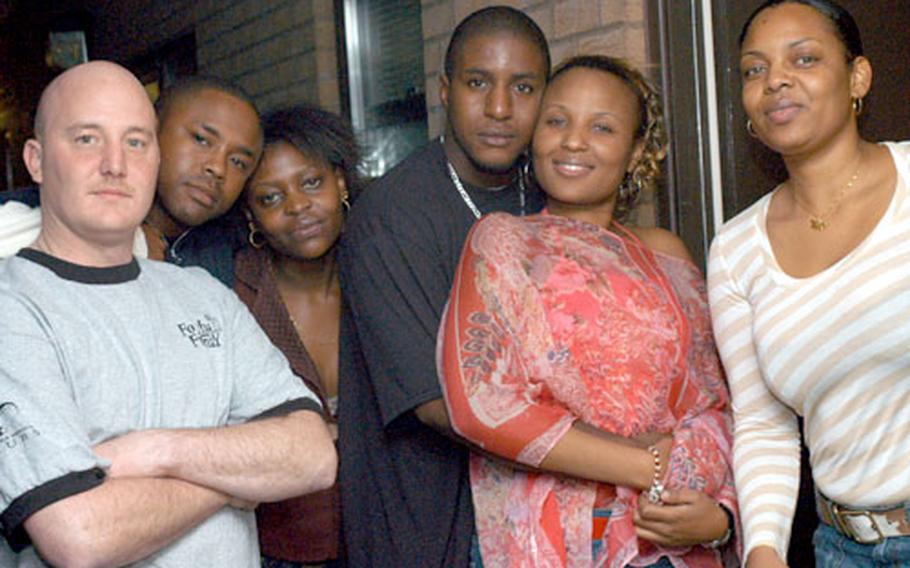 A group of friends at RAF Croughton, from left, Staff Sgt. Michael Townsend, Staff Sgt. Randy Townsend, Khadaja Cali, Senior Airman Jarmaine Thomas, Rita Mkama and Leila Nassir, gather for a photo during an impromptu dorm party on a recent Saturday. With the local club closed on Saturday nights, most airmen usually travel to nearby towns for entertainment on weekends, Thomas said, but car trouble kept the friends on the post for a Halloween shindig. (Ben Murray / S&S)

A group of friends at RAF Croughton, from left, Staff Sgt. Michael Townsend, Staff Sgt. Randy Townsend, Khadaja Cali, Senior Airman Jarmaine Thomas, Rita Mkama and Leila Nassir, gather for a photo during an impromptu dorm party on a recent Saturday. With the local club closed on Saturday nights, most airmen usually travel to nearby towns for entertainment on weekends, Thomas said, but car trouble kept the friends on the post for a Halloween shindig. (Ben Murray / S&S) 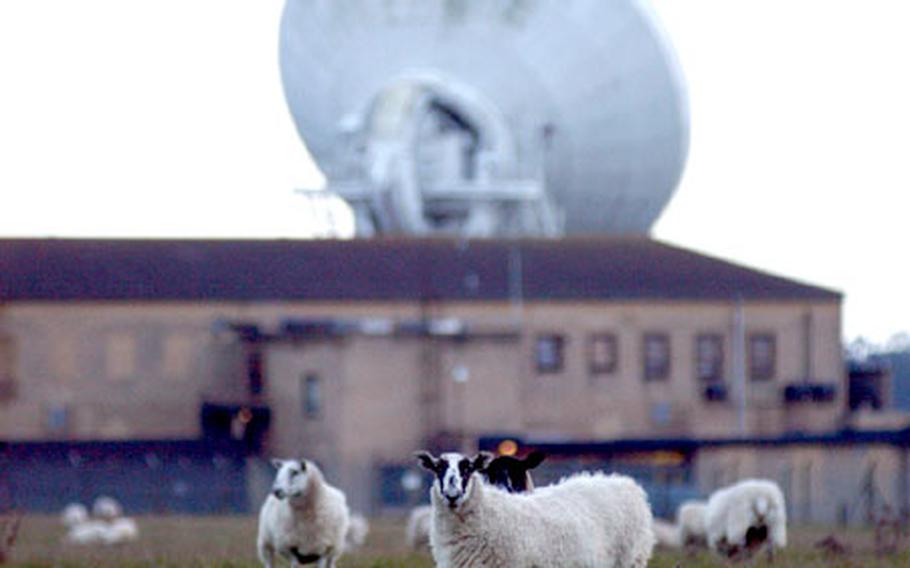 Grazing in the shadow of the base&#39;s communications equipment, one of RAF Croughton&#39;s on-base flock of sheep looks up from lunch recently. Fenced in on the base interior, the flock hangs out between the on-base services and the satellite dish in the background. (Ben Murray / S&S) 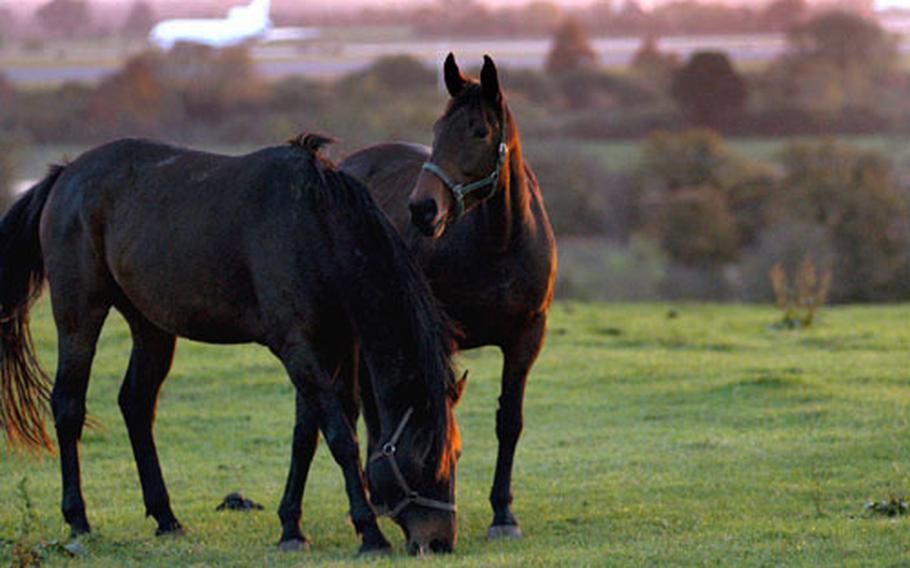 Horses that graze and gallop on the fields bordering RAF Fairford in the English countryside hang out within sight of a plane on the base&#39;s runway. Though Fairford normally has no aircraft assigned to it, planes from a nearby British base are using the landing strip while their own is under repair. (Ben Murray / S&S) 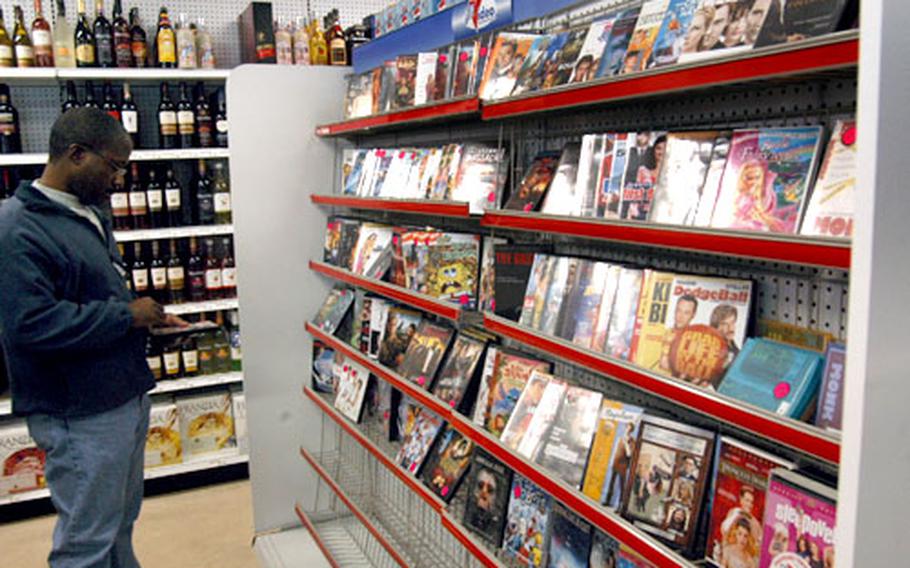 Darryl Carson, a management officer for an annex of the U.S. embassy at RAF Croughton, peruses the Spartan video rental shelf at the local Shoppette recently. (Ben Murray / S&S)

New arrivals at Air Force communities often have to get used to the noises associated with an active air base, and the adjustment to life at RAF Croughton is no different.

Eventually, said Airman 1st Class Christian Navarro-Salazar of the base&#8217;s 422nd Security Forces Squadron, you just get used to the sound of the sheep.

With no aircraft to drown them out and few people to cause commotion, adjusting to the sound of a flock of sheep that lives on base is pretty typical of life at one of the Air Force&#8217;s seven &#8220;geographically separated units,&#8221; or GSUs, that dot the map of England.

The GSUs are generally small, quiet and marooned in the countryside near crumbling towns and working farms. That makes for a unique lifestyle for the roughly 2,600 airmen and dependents at the United Kingdom&#8217;s remote bases &#8212; one of country living and a life away from major American military services, which are between three and five hours away.

Out here, there aren&#8217;t any sprawling commissaries and 24-hour Shoppettes that military members are accustomed to. Instead, they&#8217;ve got tiny base exchanges with limited hours, PowerZones the size of shower stalls and an almost total lack of Burger King.

Many stores at a base like RAF Fairford, for instance, might not open until 10 a.m., if at all, on some days. Many shops and volunteer-run services sit waiting for someone to open them for a few odd hours.

That can sometimes give GSU community members a few headaches.

&#8220;It&#8217;s kind of hard to get some of the stuff you need,&#8221; said Senior Airman Joseph Mangrum from Fairford&#8217;s 420th Air Base Squadron, who recently waited more than three months to get a grill he ordered through the local exchange.

But the lack of available shopping and commissary services isn&#8217;t an overwhelming issue, airmen said. They manage, not least because they&#8217;ve got a beefed-up cost-of-living allowance to make up for having to buy groceries and sundries off base.

&#8220;We pretty much shop all on the economy,&#8221; said Airman 1st Class Micah Hanauer, also from the 420th at Fairford. It normally costs more to pay for the gas to get to Lakenheath than it would to just buy the item in a British store.

Other airmen say they just buy everything online.

Similarly, many GSU airmen say life among horse and dairy operations doesn&#8217;t dampen their social life &#8212; even though on-base entertainment options were summed up by one airmen as &#8220;You can bowl your heart out.&#8221;

At bases where the enlisted club might not even be open on a Saturday, airmen say they are forced to find their fun in nearby towns.

But life at some remote bases does have its disadvantages.

At Fairford and RAF Wellford, for example, the Air Force doesn&#8217;t have regular medical or dental facilities. That means airmen and their families are often forced to make long trips and take frequent time out of work to make appointments.

With three kids, Hanauer and his wife are constantly juggling appointments in Croughton &#8212; almost an hour away &#8212; and Lakenheath, a full 3&#189;-hour drive from their home.

Smaller, more remote GSUs don&#8217;t qualify for amenities such as large health clinics. But, short of setting up a full-service dental office, the command does look for other ways to make life easier for airmen, such as giving them information on how to get health care off base.

And despite even major obstacles, some GSU residents say they like their small, family-oriented communities better than the larger bases.

Hanauer said he looks forward to going home at the end of the day from RAF Fairford, to a farm where he plans to board horses, raise chickens and grow vegetables.