Patricia Wilson’s second and third grade class participates in story time on Friday. The four remaining teachers at the school have taken on multiple grades in their classrooms until the students all relocate to Vilseck and Hohenfels on Jan. 27. (Rick Emert / S&S)

Patricia Wilson’s second and third grade class participates in story time on Friday. The four remaining teachers at the school have taken on multiple grades in their classrooms until the students all relocate to Vilseck and Hohenfels on Jan. 27. (Rick Emert / S&S) 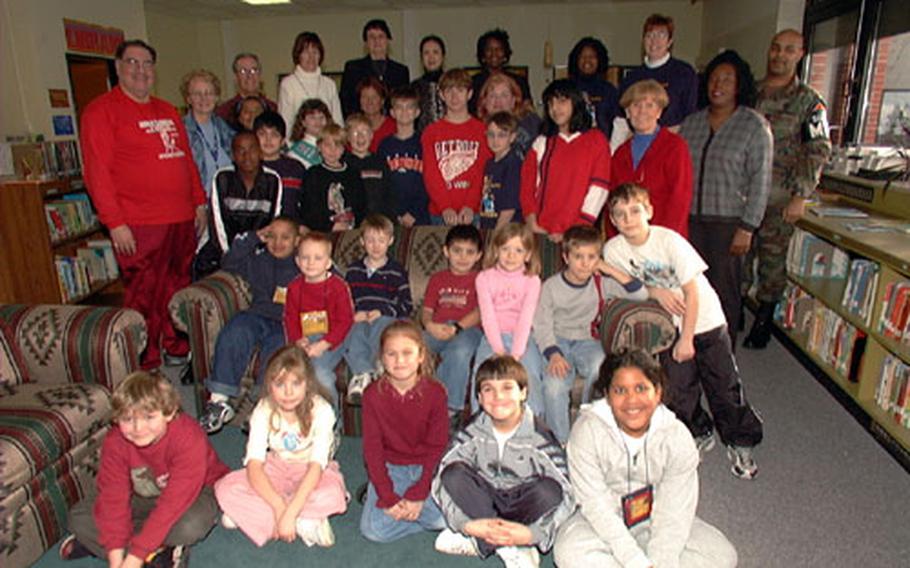 The 21 remaining students at Amberg Elementary School, down from the 80 who started the school year, will be transferred to schools in Hohenfels and Vilseck on Jan. 27 after the school closes it doors for good on Jan. 22.

The students saw their classes shrink to the point where now grades four, five and six are in the same classroom &#8212; and amount to less than half of the student body.

Although a week ago pupils and parents were concerned about the relocation, an orientation at Vilseck Elementary School on Thursday calmed most parents and children.

But the orientation changed his mind.

According to teachers Myrna Francois and Clysta Walraven-Henley, excitement is the kind of reaction one should expect from the students.

The school was scheduled to close in June, but when residents of Amberg&#8217;s housing area moved to new housing in Vilseck ahead of schedule it was decided to close shut the school earlier.

Many of the students have already relocated to their new schools. All but three of the 14 staff and faculty members have been given positions at other schools in Vilseck, Hohenfels, Kitzingen and Ansbach. Only the school&#8217;s nurse, librarian and secretary are still waiting for positions to open up, Francois said.

Thompson, who also had the distinction of being the last family member to live in Army housing in Amberg, said she would miss the tight-knit community. She and her husband signed on for three more years in Germany, thinking they would spend that time in Amberg.

Thompson and Charlene Young, another parent from the community, agreed that the new housing in Vilseck will be an improvement.

&#8220;I wish this could have been done before the school year started or at the end of the year,&#8221; Young said. &#8220;I have mixed emotions. Our new house is beautiful. But my son has this teacher that he loves, and now he has to switch schools in the middle of the school year.

W&#252;rzburg District officials took that into consideration, based on concerns voiced at a December town meeting at the school. Nearly all of the students will have either the same teacher they had at Amberg, or will have some of their Amberg classmates in their classes, Francois said.

That has made the relocation easier for Josephine Amas, a fourth-grader.