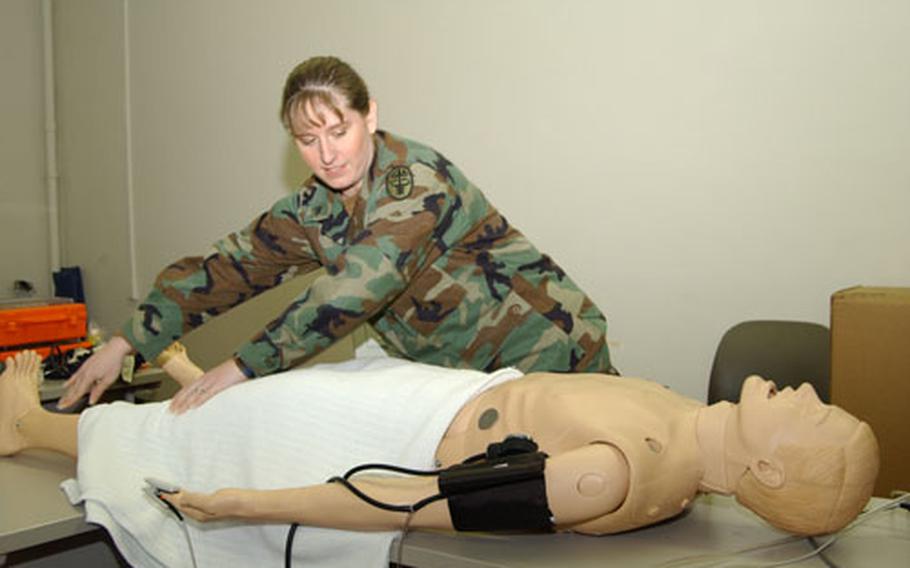 LANDSTUHL, Germany &#8212; One of the newest patients at Landstuhl Regional medical Center may be a mannequin, but he&#8217;s no dummy.

SimMan is a computer-linked mannequin that goes beyond other simulation dummies &#8212; it breathes, has a pulse and can replicate virtually any medical condition.

The first SimMan, worth about $27,000, arrived at Landstuhl on Jan. 16. Since then, 17 combat medics have been certified to train others on the mannequin.

The sex of SimMan can even be changed; when the mannequin is a female, it can simulate pregnancy.

Using SimMan&#8217;s computer, the mannequin can be given a variety of maladies that may include a heart attack, collapsed lungs or an obstructed airway. Body parts can be added or removed to simulate gunshot wounds or amputations, complete with simulated blood or foaming at the mouth.

Every action performed on SimMan is recorded in the computer&#8217;s log, which students and instructors can use to determine what went well and what may have gone wrong in training. If the wrong treatment is administered or medics run out of time, SimMan could die.

Another mannequin is on its way, which will make four available at the Landstuhl Simulation Center.