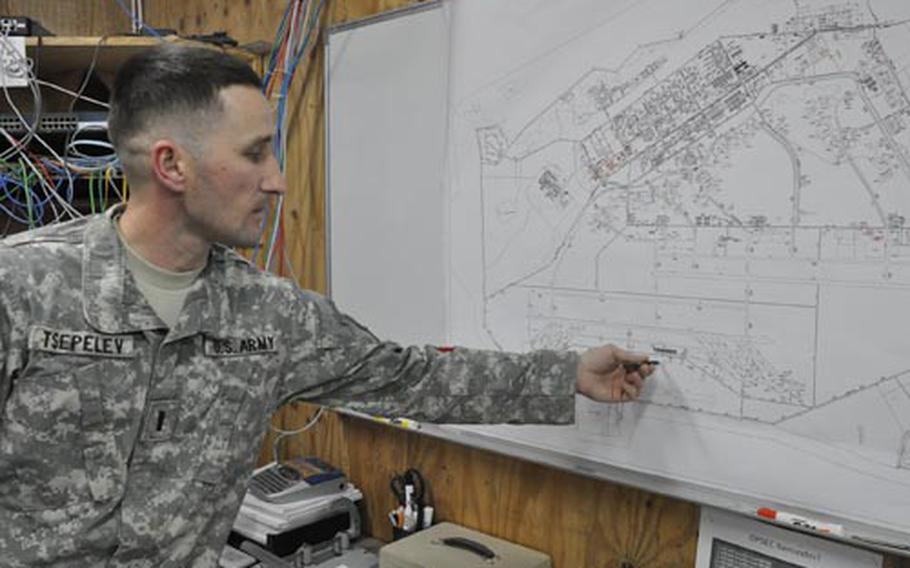 First Lt. Andrey Tsepelev, of Company C, 307th Brigade Support Battalion, 1st Brigade, 82nd Airborne Division, points out locations on the Al-Asad base that have been inspected by his preventive medicine team. Tsepelev grew up in a town in Ukraine that, prior to the end of communism, was part of the former Soviet Union. (Seth Robson / S&S)

AL-ASAD AIR BASE, Iraq &#8212; First Lt. Andrey Tsepelev can empathize with anyone emerging from a totalitarian regime.

Eight years ago the Ukrainian-born Tsepelev was 25, a new lieutenant in the Russian military. He earned just $100 a month, not nearly enough to support himself and his pregnant wife. And though it was already 2002, about a decade after the fall of communism, he was happy that the paychecks came at all.

That year, Tsepelev won a U.S. green card through the State Department&#8217;s lottery program and moved to South Carolina, where he joined the Army, despite knowing that war was imminent.

"Back in the Soviet Union, the most prestigious career was being a soldier and defending your country," he said. "When the U.S. became my home, I did carry that over, wanting to defend my new country."

Now with the 307th Brigade Support Battalion, 1st Brigade, 82nd Airborne Division, Tsepelev is on his third tour in Iraq, where he works in preventive medicine, ensuring that soldiers in remote outposts have food and water free of harmful bacteria and that the air is clean.

As part of an advise and assist brigade &#8212; a new type of mentoring and training unit that began arriving in Iraq in the fall &#8212; Tsepelev also will instruct Iraqi army personnel in basic sanitation and waste disposal. His past, he said, gives him a unique perspective on what the Iraqi people are feeling.

"You don&#8217;t completely understand what is going on," he said, "because you lost something you were living for years by. That explains the anger. But there is also hope."

Some divisiveness comes with the territory, he said.

"Their country is going through a drastic change &#8212; politically, economically and ethnically," he said. "People look at each other differently now that they are not under the old regime."

Tsepelev, now 33, has risen from being an enlisted soldier to commissioned officer. In the Russian military, his prospects were bleak because he lacked the right connections, he said, and because his mother lived in the U.S., which his superiors frowned on. His father still lives in Sevastopol, Ukraine, but "the U.S. Army does not care where my relatives live," he said. "They only look at my professionalism."

The commander of his battalion, Lt. Col. Andrew Danwin, has watched Tsepelev grow from when he first enlisted.

"He&#8217;s accomplished all the goals he has set for himself," Danwin said. "And he also does what he can to help and share his knowledge with his fellow paratroopers."

Tsepelev thinks the Iraqi people stand at a crossroads, just as his countrymen once did. The country is calmer, but bombings in the past few months have killed hundreds of civilians around the country, many of them in Baghdad.

"It&#8217;s a fragile moment," Tsepelev said, "and it can go one way or the other. Whatever the Iraqi people decide will determine the course of the next hundred years. But they have very good potential."