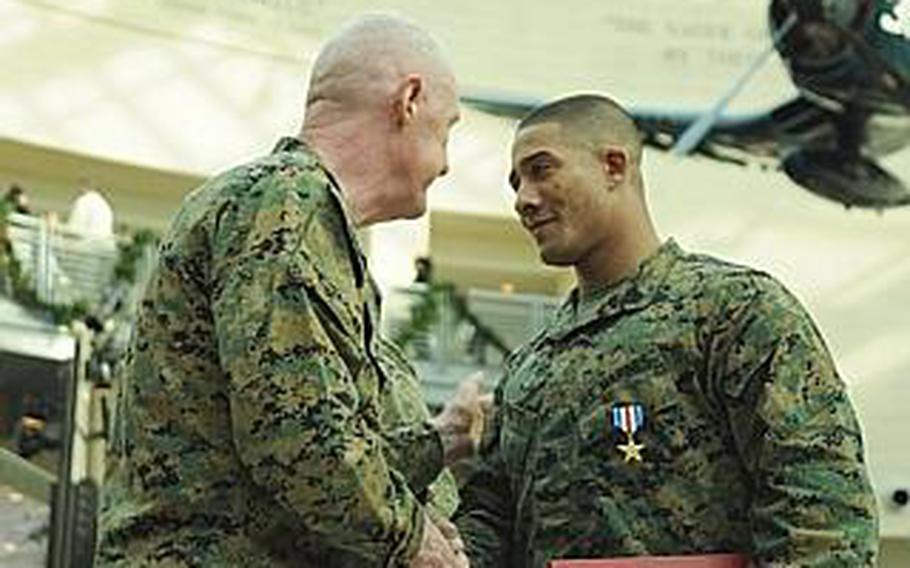 Lt. Gen. Richard Mills, deputy commandant for combat development and integration, congratulates Gunnery Sgt. Verice Bennett after presenting him with a Silver Star at the National Museum of the Marine Corps in December. (Emmanuel Ramos/USMC)

Lt. Gen. Richard Mills, deputy commandant for combat development and integration, congratulates Gunnery Sgt. Verice Bennett after presenting him with a Silver Star at the National Museum of the Marine Corps in December. (Emmanuel Ramos/USMC) 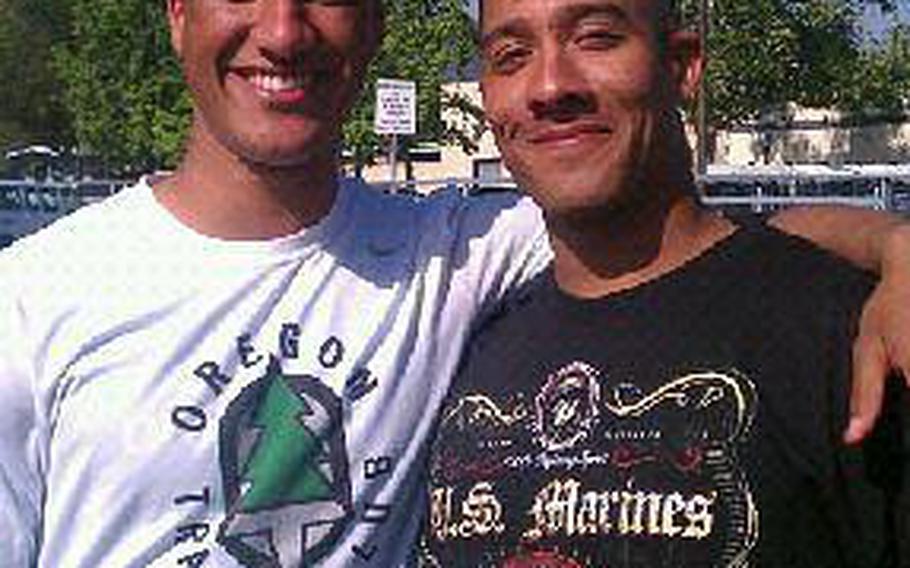 Ashton Eaton, left, won a gold medal Thursday in the decathlon. Back in the States, his brother, Gunnery Sgt. Verice Bennett, a Silver Star recipient, was cheering him on. (Courtesy of Verice Bennett)

WASHINGTON &mdash; Before decathlete Ashton Eaton left for London, Gunnery Sgt. Verice Bennett told him that if he ever got tired, he should picture Bennett running just ahead of him.

&ldquo;Because you know if I beat you, I&rsquo;m talking trash ... for the rest of your life,&rdquo; Bennett said he told his half brother.

Back in Virginia, Bennett was cheering. Loudly.

&ldquo;I can&rsquo;t say anything more than proud,&rdquo; Bennett said Friday in a phone interview from Marine Corps Base Quantico. &ldquo;I was yelling when he started. I was at the staff club when he ran the 400, the single lap &hellip; yelling, &lsquo;Let&rsquo;s go! Run faster!&rsquo; when he was in [second place].&rdquo;

Then Eaton picked up the pace significantly, Bennett said.

&ldquo;He made them all look like they were running backwards,&rdquo; he said.

Bennett, 34, is 10 years older than Eaton, and the two &mdash; who have the same father &mdash; didn&rsquo;t know each other well when they were young, but they&rsquo;re &ldquo;definitely tight now,&rdquo; Bennett said.

Bennett ran the 4x400 and the 800 in junior high school, then left track and played just about every other sport, participating in a sport every season throughout high school, he said. Eaton also got involved in sports early, though he didn&rsquo;t start training or competing in decathlon until college at the University of Oregon.

Bennett says he sees a lot of himself in his younger brother &mdash; his passion and intensity, he said.

The two bear a strong family resemblance, making things a bit awkward for Bennett and his wife when neighbors comment on Eaton&rsquo;s nude photo shoot for ESPN&rsquo;s recent body issue and mention how much the two look alike.

Though Eaton beat Bennett in a foot race recently, grappling was a different story.

&ldquo;I put him in multiple choke holds&rdquo; during an impromptu grappling match at their aunt&rsquo;s house in Oregon, Bennett said. &ldquo;He&rsquo;s scrappy, but he can&rsquo;t beat me in strength yet.&rdquo;

The decathlon consists of 10 events over the course of two days, and Bennett said he&rsquo;s tried to record and watch everything he could. He regrets not flying out to Oregon to watch Eaton compete in the Olympic trials, where he set a world record.

&ldquo;I&rsquo;ve seen him run, but not do a whole decathlon competition,&rdquo; Bennett said. &ldquo;It would have been great to watch him compete.&rdquo;

Eaton did get to fly out for Bennett&rsquo;s award ceremony last year &mdash; when the older brother was awarded the Silver Star for his actions in Afghanistan.

Eaton wrote on his blog that he was blown away by the story and the ceremony.

&ldquo;Until now, I didn&rsquo;t know what gravity it held to hold the American flag at something like the World Championships or the Olympics,&rdquo; he wrote. &ldquo;What an honor.&rdquo;