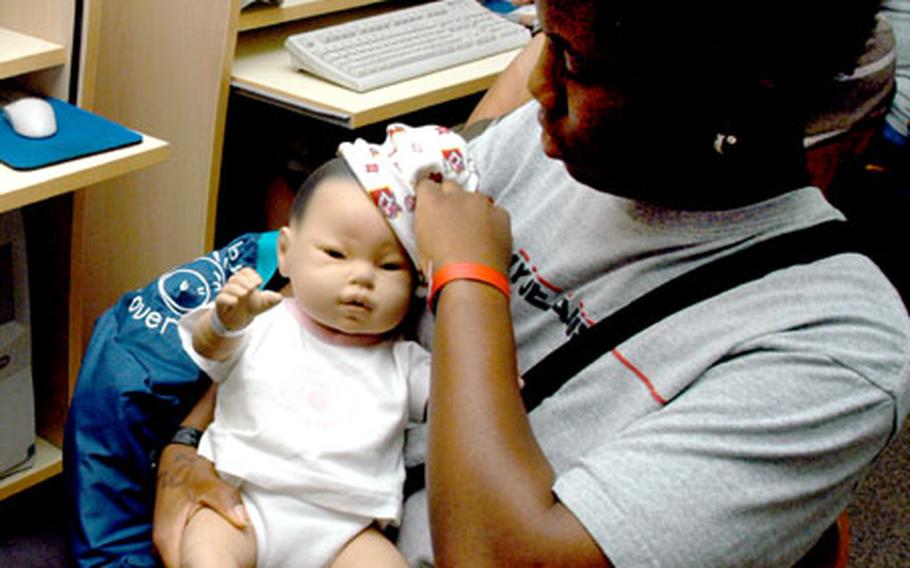 Seaman Apprentice Cecilia Jones had to carry a baby simulator as part of her military indoctrination in Sigonella, Sicily. (Kendra Helmer / S&S)

As part of a mandatory parenthood education program in Sigonella, enlisted sailors become parents for a night to baby simulators that look and act like real infants. The 10-pound simulators record the care they ask for and if the sailor slacked off on parenting duties.

&#8220;One female was complaining this morning,&#8221; said Scott, the health promotion coordinator for Naval Hospital Sigonella. &#8220;She was convinced she had the most horrible baby that cried for hours. But her baby only cried for 44 minutes. That goes to show how stressful a crying baby can be.&#8221;

The program, known as Choices, was developed by base and hospital department heads in 1997 when they realized Sigonella&#8217;s single sailors had a high rate of unplanned pregnancies.

In November, Choices became mandatory for enlisted sailors of both genders, 26 years of age and younger, who don&#8217;t have children. While officers participated initially, they don&#8217;t anymore.

&#8220;In collecting statistics, it was found the people getting pregnant were enlisted,&#8221; said Scott, 35, from Fredericksburg, Va.

The program involves 4&#189; hours of classroom training, during which speakers talk about conception, contraception, sexually transmitted diseases and the financial costs of parenting.

A legal office speaker discusses paternity and concerns arising if one of the parents is an Italian national, Scott said.

At the end of the day, each sailor gets a $350 infant simulator to keep overnight. The schedules of real newborns were entered into the simulators.

The 26 simulators cry if they need to be fed, burped or if their diaper needs to be changed. Others just cry because they&#8217;re cranky. Lucky sailors, such as Seaman Cecilia Jones, get the more agreeable babies that coo when happy.

When the baby cries, the sailor has to figure out why.

Its sensors record if its diaper was changed, if it was fed enough, how many times its head wasn&#8217;t supported, if it was put to sleep correctly on its back and if it was abused or shaken. Sailors can&#8217;t deceive the baby, either &#8212; a bottle has to be held to its lips and the diaper completely removed and changed.

When sailors turn the babies in Tuesday morning, Scott downloads the information to see how they fared.

Scott said statistics show Choices works. Sailors who participate are three times less likely to have a child while in Sicily, compared with sailors the same age who didn&#8217;t attend before the program became mandatory.