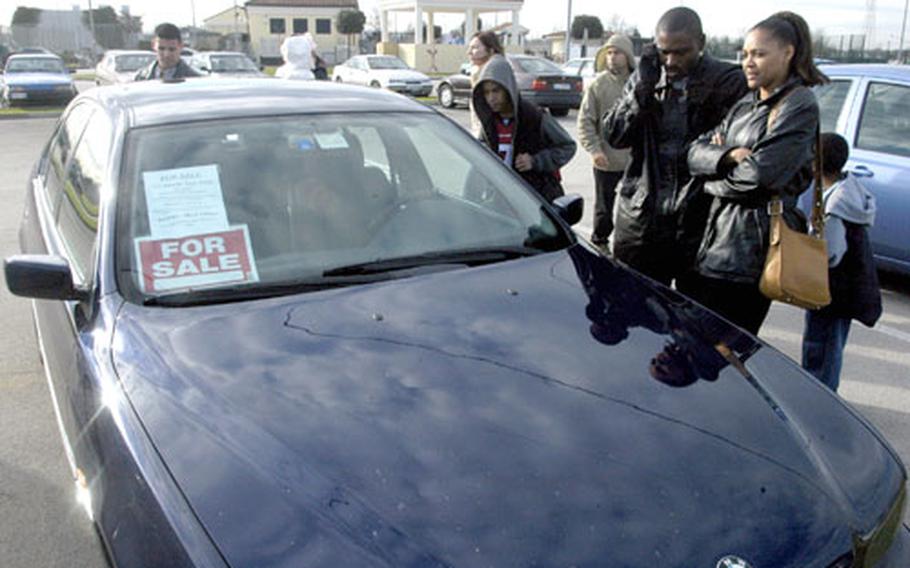 Petty Officer 1st Class James Wise, assigned to the Weapons Department at Naval Air Station Sigonella, talks on his cell phone as he and his wife look over a 1997 BMW 525. Wise and his family flew to Naples on a Navy aircraft to replace cars and furniture lost during December’s heaving flooding. (Jason Chudy / S&S)

Petty Officer 1st Class James Wise, assigned to the Weapons Department at Naval Air Station Sigonella, talks on his cell phone as he and his wife look over a 1997 BMW 525. Wise and his family flew to Naples on a Navy aircraft to replace cars and furniture lost during December’s heaving flooding. (Jason Chudy / S&S) Whether it&#39;s a good-faith price cut or just some slick salesmanship, one car owner from the nearby Allied Joint Forces Command base wanted to offer Sigonella residents a “special” deal on his car. (Jason Chudy / S&S)

About 65 people made the flight, according to Lt. Jon Groveman, Sigonella&#8217;s public affairs officer.

&#8220;We filled the plane,&#8221; he said, saying that nearly 80 people showed up for the flight. Those who were not able to get on this flight will be able to try again next week.

Both the NAS II complex and the nearby Marinai housing area were flooded after four days of heavy rain in mid-December. Of the 526 townhouse-style houses in the housing area, 88 percent sustained some level of water and mud damage.

Wise, her husband, Petty Officer 1st Class James Wise, and their children walked through the dozens of cars on Naples&#8217; used car lot. Officials alerted base personnel about the flight to bump up the numbers of cars available for sale.

Petty Officer 1st Class Mario Brioli, who transfers from Naples in three months, put his car on the lot after hearing about how much damage the flooding caused.

Brioli said that although the Sigonellans are desperate for used cars, he believed most Naples residents understood the situation and would cut them a deal.

Also convenient for the Sigonellans was the large Navy Exchange a few hundred yards away.

Groveman said that although Sigonella Navy Exchange officials quickly ordered more furniture for the store, it could take up to 60 days for it to arrive. However, those buying furniture in Naples could receive it in as little as a week.

Shopping for both a car and furniture were Lt. j.g. Rebecca Waldram, husband Alan and daughter Annika.

&#8220;Once we get a car, maybe we can look for some furniture,&#8221; Alan Waldram said shortly after their arrival. Both of their cars received water damage, but only one needed to be replaced.

&#8220;The other one only had a couple of inches of water,&#8221; he said after calling Naples firefighter Bill Belitz about purchasing his 2000 Opel.

Once Belitz arrived, he helped Rebecca look throughout the car and then let her take it for a test drive. Belitz is transferring at the end of January, but wasn&#8217;t planning on selling his car so soon.

The sale was completed within an hour and Belitz will drive a friend&#8217;s car until his Jan. 31 departure.

The Waldrams, and all the other Sigonella buyers, also were able to register and insure their cars for the drive back to Sicily.

&#8220;This is a special case,&#8221; said Lt. Gilberto Penserga, director of the Naples Motor Vehicle Registration Office. &#8220;Normally, if you purchase cars [for use] in Sigonella, you register them in Sigonella.&#8221;

The office, along with the Geico and USAA insurance offices, extended their hours to help the car buyers.

And Naples residents may have other opportunities to help Sigonellans, Groveman said. Another flight is being scheduled for next week and others may come down the line &#8220;as long as there&#8217;s interest,&#8221; he said.

Groveman, who was taking photographs and giving interviews in his public affairs capacity, had another reason for being in Naples.

He also had to shop for new furniture.