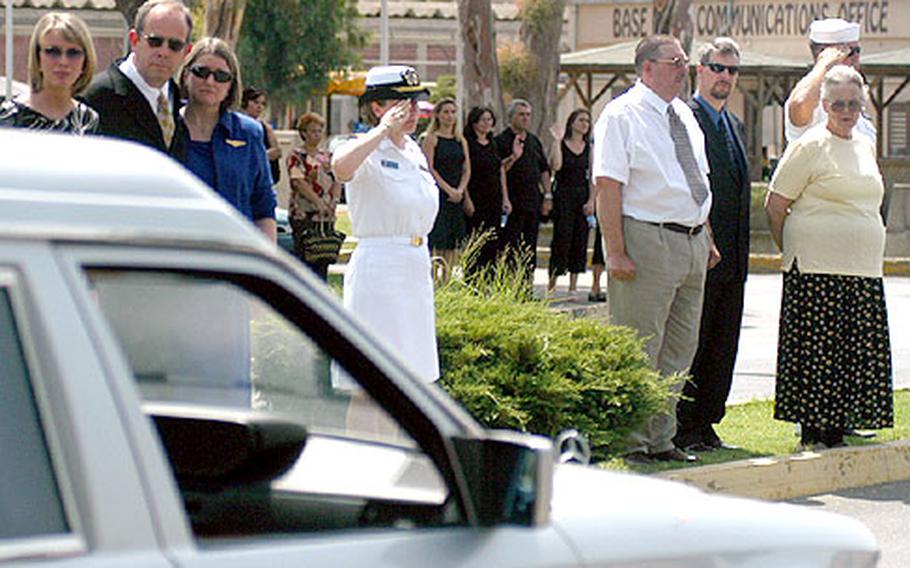 After the memorial service, dozens of friends and family lined the Sigonella base street to observe cars carrying the four sailors’ remains driving past. (Kendra Helmer / S&S)

SIGONELLA, Sicily &#8212; The mourners gathered around the tables to look at the photographs.

Cmdr. Kevin A. Bianchi dancing with his wife.

The four men died July 16 when their MH-53E Sea Dragon crashed 10 miles from Naval Air Station Sigonella. The crash is under investigation.

On Wednesday, a sea of people in dress whites walked across the base. About 800 people, including relatives from the States, packed a hangar to honor the sailors from Heavy Helicopter Combat Support Squadron Four.

The men&#8217;s children clutched squadron coins, the women held flowers, as speakers remembered the sailors from the &#8220;Black Stallions&#8221; squadron.

Afterward, mourners lined the base street. Sailors stood at attention and relatives held one another as cars passed with the sailors&#8217; remains.

Several of their friends and family members talked about them later during interviews.

Bianchi, the squadron&#8217;s executive officer who turned 40 the day before he died, was to become the commanding officer in November.

The good-natured Maplewood, N.J., native debated with anyone about anything.

He also worked out faithfully.

She said her husband was a religious man, and his children were his life: Kevin, called K2, 9; Christopher, 6; and Julia, 3.

Ober, 27, left behind a wife and 4-year-old daughter. The pilot loved racing his motorcycle. The Jacksonville, Fla., native also was quite the wrestler, which he proved during a detachment to the United Arab Emirates.

Ober consecutively pinned all his challengers, about 10 members of the detachment team. He was finally pinned when the guys ganged up on him at once.

Baumgartner, Ober&#8217;s friend for four years, said Ober was very close to his family. During a 10-week detachment, all Ober talked about was his wife and daughter, he said.

Friends said Ober was an exceptional pilot and especially good at hovering.

Sailors said they also looked forward to working with Gibson, whom they called Gibby.

Gibson, 33, an aviation structural mechanic, liked to bowl and spent a lot of time with his Italian wife, Daniela.

The Richmond, Va., native was the leading petty officer for team B&#8217;s work center, where he put in long hours.

The other enlisted crew member on the crashed helicopter was Cox, 21, an aviation electrician&#8217;s mate.

Friends called Cox &#8220;the admiral&#8221; &#8212; he was leaving in September for the University of Missouri as part of the Seaman to Admiral Program. He wanted to be a jet pilot.

Petty Officer 3rd Class Sandra Anderson, 22, enjoyed joking with the Duluth, Minn., native. He teased her for being from Iowa and would yell the Minnesota State College fight song at her.

Cox was teased for walking on his tiptoes and always finding a way to get dirty. The voracious reader ordered at least a book a day online while in the United Arab Emirates.

Cox&#8217;s mother, Jo Thornley Cox, said she always had a feeling her son wouldn&#8217;t live to old age. She and other family members visited the field where the men died.

A college fund has been established for the children of Cmdr. Kevin Bianchi and Lt. Peter Ober (the other two sailors had no children). Donations will be split equally among the four children. To contribute, send a check to: College Bound Fund, c/o James Donovan, 527 Stuyvesant Ave., Lyndhurst, NJ 07071.

Squadron executive officer from Maplewood, N.J. Born July 15, 1963. Graduated from the U.S. Naval Academy, Annapolis, Md., in 1985 with a bachelor of science degree in applied science. Assumed the duties of executive officer for Heavy Helicopter Support Squadron Four on Aug. 31, 2002. Survived by his wife, Rita Barrie, and children Kevin, Christopher and Julia.

Pilot from Jacksonville, Fla. Born Feb. 24, 1976, in Charleston, S.C. A 1998 graduate at The Citadel in Charleston and commissioned at Officer Candidate School in April 2000. Designated a naval aviator in January 2001. Arrived at HC-4 in November 2001. Survived by his wife, Alicia, and their 4-year-old daughter, Madeline.

Aviation electrician&#8217;s mate from Duluth, Minn. Born May 4, 1982. Reported to HC-4 in October 2002 after completing Recruit Training in July 2001, Naval Aircrew Candidate School in August 2001 and Aviation Electrician&#8217;s Mate A-School in March 2002. Survived by his father, Joseph Cox, his mother, Mary Jo, his sister, Anna, and his brother, Jackson.

Aviation structural mechanic from Greenwood, Va. Born May 28, 1970. Arrived at HC-4 in 1992, where he attained several qualifications. In 1998 transferred to Sigonella Operations to fly in the C-12 and C-26. Earned a bachelor&#8217;s degree in professional aeronautics with honors from Embry Riddle University. Returned to HC-4 in November 2001. Survived by his wife, Daniela Giannone Gibson.