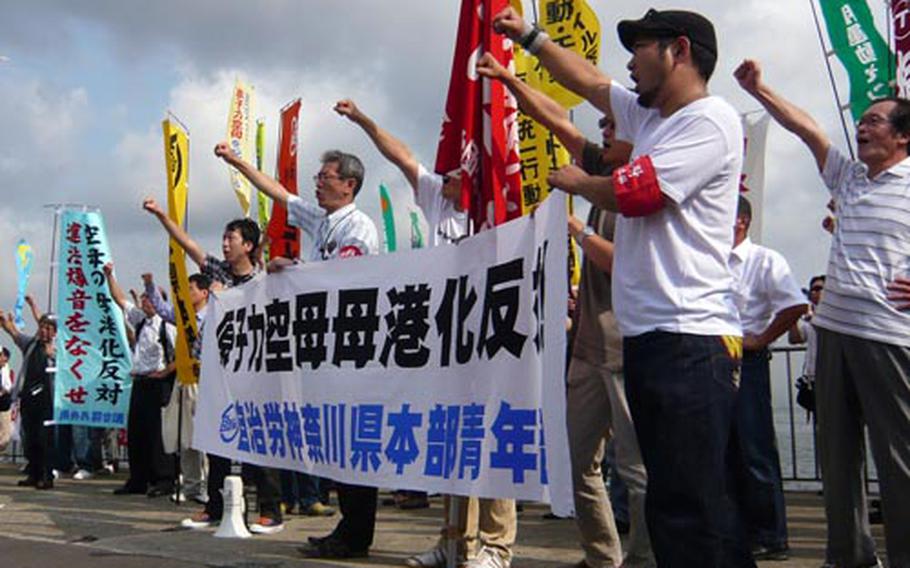 Protesters chant their opposition to the deployment of the nuclear-powered USS George Washington to Japan. Approximately 350 protesters gathered at Umikaze Park in Yokosuka city as the ship pulled into Yokosuka Naval Base. (Hana Kusumoto / S&S)

Protesters chant their opposition to the deployment of the nuclear-powered USS George Washington to Japan. Approximately 350 protesters gathered at Umikaze Park in Yokosuka city as the ship pulled into Yokosuka Naval Base. (Hana Kusumoto / S&S) 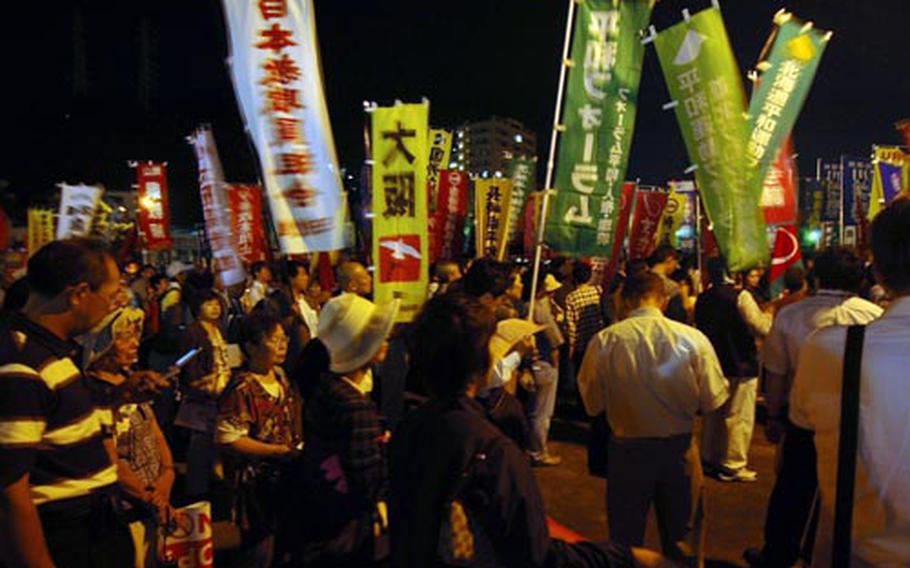 Thousands of protesters gathered Thursday night to rail against the arrival of the nuclear-powered USS George Washington. The throng of people marched down Route 16 toward the main gate of Yokosuka Naval Base, then toward Yokosuka Chuo Station. They stopped in front of the base&#39;s main gate and shouted: "George Washington go home." (Teri Weaver / S&S)

An estimated 2,500 marchers carried jewel-colored banners and handed out dozens of pamphlets, voicing concerns about safety and military muscle after the USS George Washington pulled into its new home.

Various rallies were held throughout the day. Despite riot police standing on street corners and protesters stopping traffic, the day passed normally for many Yokosuka city residents near the base. People hurried to train stations and ate lunches at fast-food chains. Many showed little emotion when asked about the George Washington&#8217;s historic arrival.

"I think many residents are distant [from the carrier&#8217;s arrival]," said Teruo Sato, 67, a longtime Yokosuka resident. "Many are not interested because it&#8217;s something that has already been decided."

Safety was the calling card for protesters.

"It&#8217;s hard to believe that a ship that catches fire from a crew member smoking is absolutely safe," said Hidemichi Kano, 49, from Tokyo, referring to a May fire that injured 37 sailors and caused millions of dollars in damages.

"It&#8217;s too late when an accident occurs," said Mineyuki Uno, a lawyer and co-leader of the Kanagawa Peace Center.

"It will have a great effect, not just on Yokosuka but in Kanagawa prefecture, Tokyo and the entire Kanto plain," he said Thursday evening as fellow protesters marched down Route 16, passing in front of Yokosuka Naval Base&#8217;s main gate.

Earlier in the afternoon, a group of protesters handed out pamphlets to sailors that called for peace. Japanese police told the group to remove a 12-foot banner from a pedestrian walkway in front of the base. The protesters argued for 30 minutes and then gave up.

"It&#8217;s their opinion" and they have a right to voice it, said Petty Officer 3rd Class Parker Mesch.

Mesch&#8217;s view was shared by George Washington executive officer Capt. Karl Thomas. "One of the great things about both the U.S. and Japan is freedom of speech, freedom of the press," Thomas told reporters aboard the ship Thursday morning. "It&#8217;s their right to do so, and I heard that the demonstrations here are peaceful."

Tatsuo Sugano, 30, owns several bars near the Navy base. He said the answer was learning to work and live together.

Stars and Stripes reporter Allison Batdorff contributed to this story.