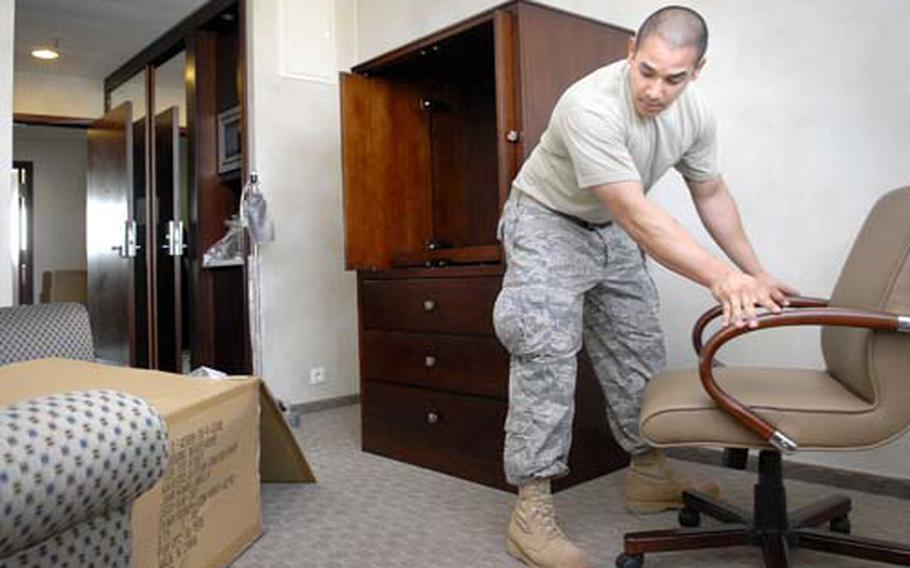 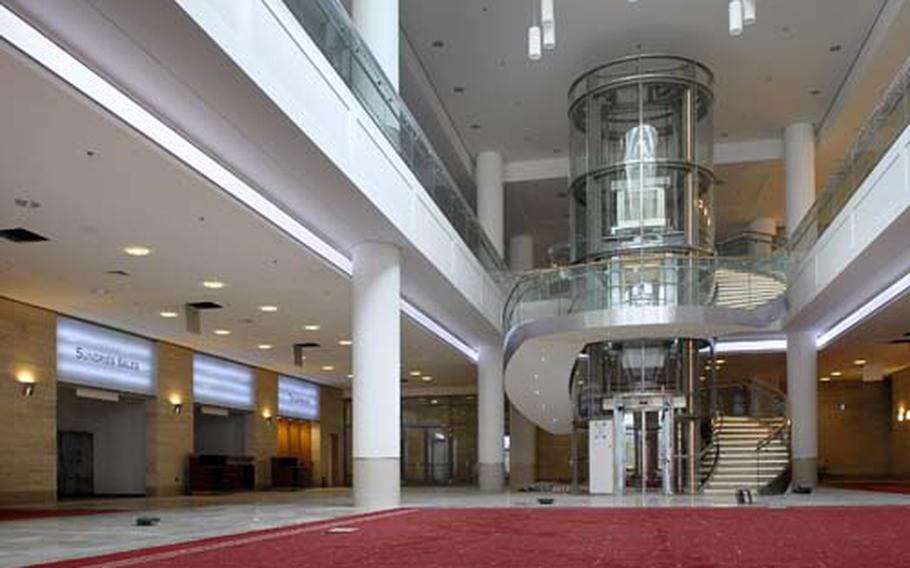 RAMSTEIN AIR BASE, Germany &#8212; Crane operators are still busy at work on the roof and no opening dates have been penciled in on the calendar.

But in a sign of progress after more than two years of delays, workers began moving furniture into the Kaiserslautern Military Community Center on Tuesday. And the Army and Air Force Exchange Service is recruiting employees for its portion of the 844,000-square-foot mall and hotel complex.

From outside the 350-room hotel Tuesday morning, mattresses could be seen propped up against windows on one floor. Civilian workers, with help from military personnel assigned to base fitness centers, unloaded reclining chairs, desks and other pieces of furniture for the eight-story visiting quarters.

In the empty lobby, a red carpet was rolled out, adding a splash of color to a reception area lit by a lofty atrium and bedecked with a fireplace and floor-lit staircase that spirals around a glass-encased elevator.

But just when guests will take that stately ride or walk up to their room isn&#8217;t known.

Landesbetrieb Liegenschafts-und Baubetreuung, or LBB, the German state construction agency overseeing the project, has turned over the guest rooms but not the unfinished lobby. USAFE is still awaiting handover of the rest of the KMCC, officials said.

LBB spokesman Marcus Ramp said Tuesday he thought LBB would finish by summer, but he couldn&#8217;t be more specific.

"I cannot tell you the exact date since the people responsible are off today," he said. "But as much as I know, nothing has changed and we&#8217;re still on schedule."

The KMCC opening date has been a moving target since construction began in 2003. The project was delayed by a series of design flaws, including a leaky roof that had to be torn out and replaced, cracks in the floor and flammable kitchen ducts.

The center is expected to cost about $170 million, not including costs for major repairs.

AAFES and other vendors can&#8217;t move merchandise into the KMCC mall until it&#8217;s finished. But AAFES has launched a recruitment campaign, distributing fliers advertising employment opportunities at the KMCC.

Overall, AAFES is looking to hire an additional 300 U.S. and local national associates, said Jadi Rendulic, an AAFES human resources manager, in an e-mail to Stars and Stripes.

Rendulic said AAFES will start with 100 laborers, an initial team to set fixtures and stock the merchandise, a process which should take approximately four months.

About 30 laborers have already started, she said, and are currently being trained in other AAFES&#8217; retail facilities until "we can begin work at the KMCC." AAFES, she added, will also start recruiting employees for the food court and the four movie theaters at the KMCC, since those sections will open prior to the main store.

Stars and Stripes reporter Marcus Kl&#246;ckner contributed to this story.