Signs are there: Battalion is going home 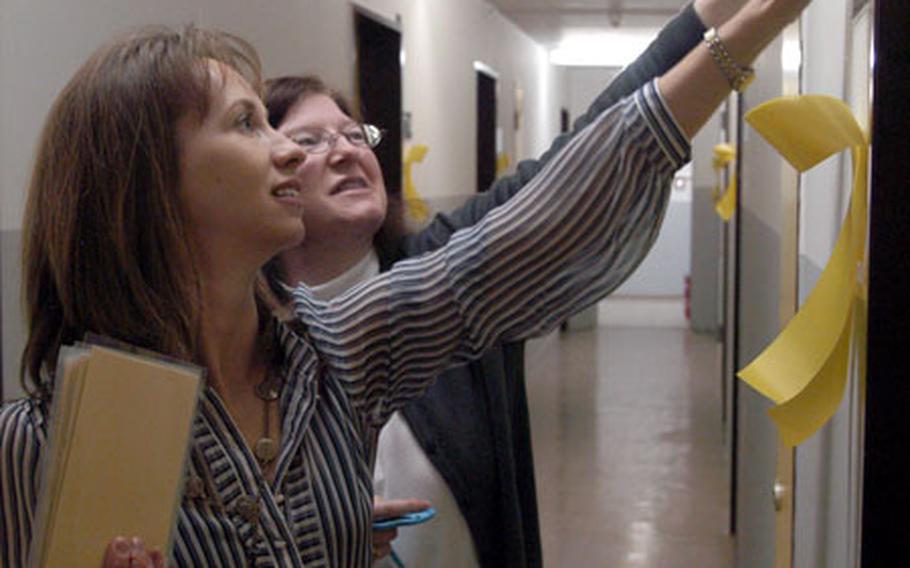 Dawn Eldred, left, and Denise Walker post signs next to doors Friday in a barracks that will soon house soldiers of the 501st Forward Support Battalion. The soldiers have spent more than a year in Iraq, and are expected to return before the end of the month. (Matt Millham / S&S)

Dawn Eldred, left, and Denise Walker post signs next to doors Friday in a barracks that will soon house soldiers of the 501st Forward Support Battalion. The soldiers have spent more than a year in Iraq, and are expected to return before the end of the month. (Matt Millham / S&S) 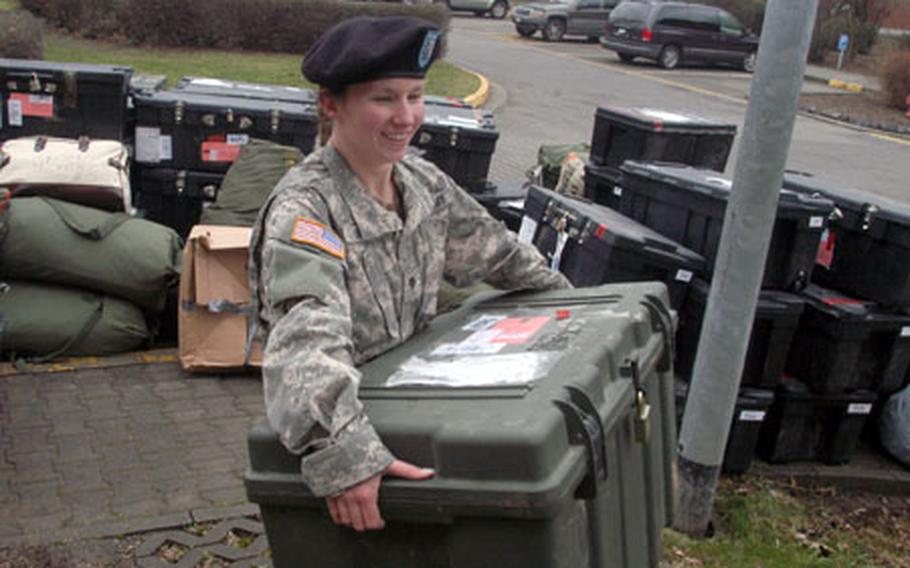 Spc. Tosha Uribe moves a footlocker belonging to a soldier deployed with Company B, 501st Forward Support Battalion, into a barracks building used to house single soliders. Uribe was one of three soldiers tasked with moving scores of boxes, bags and footlockers belonging to single soldiers of the 1st Brigade Combat Team. (Matt Millham / S&S)

Like yellow ribbons and ticker tape parades, the signs are now part of the tradition of war, showing that the countdown to homecoming has begun.

The signs, which spouses had to wait until Thursday to post, are just a small part of the brigade&#8217;s homecoming preparations.

Troops are expected to return home by late February or early March.

For more than a year, this post, headquarters of the brigade, has been relatively quiet. Buildings have been empty while their former residents have been at war, and parking at the post&#8217;s shopping center has been plentiful.

But now the post is waking up from its slumber.

Empty barracks are undergoing a renovation of sorts as soldiers and family members team up to clean, paint and decorate the rooms for their battle-weary occupants. A dining facility that had been closed is reopening and will serve its first meal this week. Personal belongings that were locked in storage are seeing the light of day.

It all points to the fact that the brigade&#8217;s second tour is winding down.

Staff Sgt. Jeffrey Robertson, the family readiness leader for the battalion&#8217;s Company B, has overseen the cleaning of his company&#8217;s 92 barracks rooms. The feat was accomplished in three days, but &#8220;I never would have made it without the spouses,&#8221; he said Friday.

In terms of what needs to be done, 92 rooms is a proverbial drop in the bucket. About half the brigade&#8217;s roughly 3,500 soldiers are single troops who live in the barracks, said Sgt. 1st Class Larry Perrine, the brigade&#8217;s rear detachment sergeant major. It doesn&#8217;t matter how many long days and weekends have to be worked until the troops come home, &#8220;we just have to be ready to receive them,&#8221; he said.

The soldiers will find in their rooms items they&#8217;d left behind or shipped back from Iraq. Their beds will be made and toiletries, snacks and other items will be waiting for them.

The rooms also will be furnished with information including phone numbers for local restaurants, car rentals, taxi services, and, because the transition from war isn&#8217;t as easy as just leaving the war zone, combat stress teams.

Kelly Jensen, an Army spouse, was among those who pitched in to help spruce up scores of single soldiers&#8217; barracks rooms Friday.

Families preparing for return of soldiers

She&#8217;s tried to get all of his favorite foods and drinks and made sure the house is ready. But most important, she said, is letting him know she supports him 100 percent, &#8220;Because when he feels better, I feel better.&#8221;

Preparing spouses and families for the return of war-weary soldiers, however, isn&#8217;t nearly so simple a task as preparing favorite meals and making sure everything is tidy.

&#8220;Reunion sometimes is very stressful,&#8221; said Katherine Monge, mobilization and deployment specialist in Giessen, Germany. Monge teaches spouses and soldiers how to prepare for and cope with deployment and reunion. Since September, more than 400 spouses have attended the deployment-related courses she teaches.

She is an Army spouse herself, and in her six years as part of the 1st Brigade Combat Team, 1st Armored Division community, she&#8217;s gone through many of the same pains other Army spouses have endured &#8212; or are about to endure.

&#8220;The first (deployment) was a bit of a challenge because I didn&#8217;t know what to expect, and certainly I had a lot of expectations,&#8221; said Monge. This time, though, will be different. She&#8217;s prepared to accept whatever changes may have occurred during the separation.

But the key to a successful reunion, she said, is successful communication.