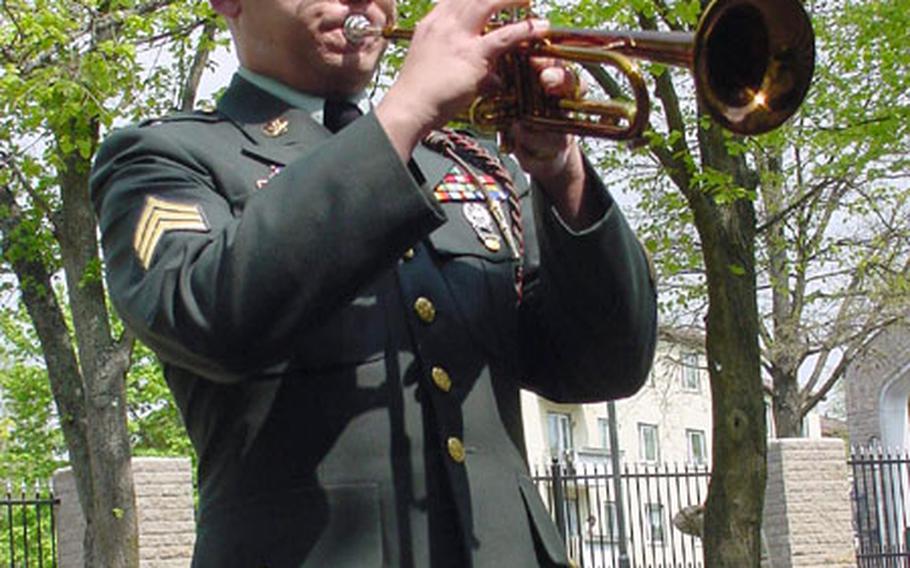 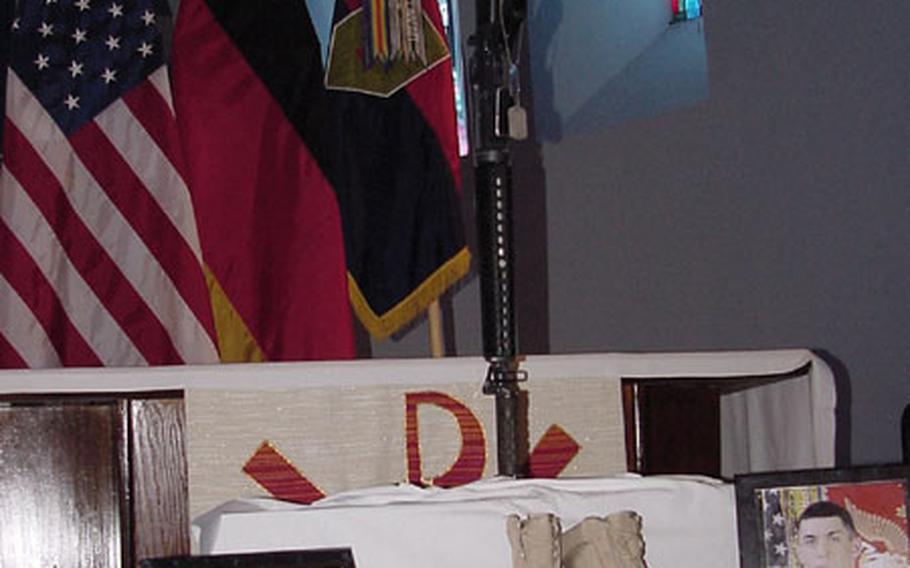 The traditional boots, rifle, helmet and photographs of Pfc. Shawn Edwards are displayed on a podium at Leighton Chapel in Würzburg. (Courtesy of U.S. Army)

The 20-year-old soldier &#8212; a switching systems operator for the 121st Signal Battalion from Kitzingen, Germany &#8212; found himself manning an M249 machine gun, pulling security atop a Humvee April 23 as a convoy from his &#8220;Hardlink Platoon&#8221; drove through Samarra, Iraq. Edwards died when a homemade bomb exploded next to his vehicle.

Five days later, friends back in Germany gathered at the Leighton Barracks chapel to remember him as he was and mourn what he might have become.

Edwards was a varsity football player and wrestler at York Township High School in Elmhurst, Ill., who decided during his junior year to enlist in the Army, according to an obituary in the Chicago Tribune.

He joined June 13, 2002, and spent a year training in Georgia before joining the 121st Signal Battalion. He deployed to Iraq with his unit in February and was helping the unit install cellular communications networks in the war zone.

Edwards had made a round of phone calls and e-mails to friends and family in the days before he died, the Tribune reported. His father, Glen, a Vietnam veteran, said the soldier was looking forward to participating in his sister&#8217;s wedding next year. And he dismissed his grandmother&#8217;s fears for his safety.

In a tribute read at Wednesday&#8217;s service, his commanders remembered Edwards as a stellar soldier with a can-do attitude and a winning sense of humor.

&#8220;Pfc. Edwards was the kind of soldier that every leader wants to have on their team,&#8221; said Lt. Col. James P. Garrison, the battalion commander. &#8220;He soldiered with an infectious attitude and a degree of determination that would make the saltiest of sergeants major proud. He was happy being a soldier.&#8221;

Edwards was posthumously awarded the Purple Heart and Bronze Star.

Edwards is survived by his father, Glen, his mother, Haifa, and his sister, Robin, all of Bensenville, Ill. Memorials may be made to the Shawn Edwards Scholarship Fund, c/o Bannockburn Travel, 2101 Waukegan Road - Suite 300, Bannockburn, IL, 60015.