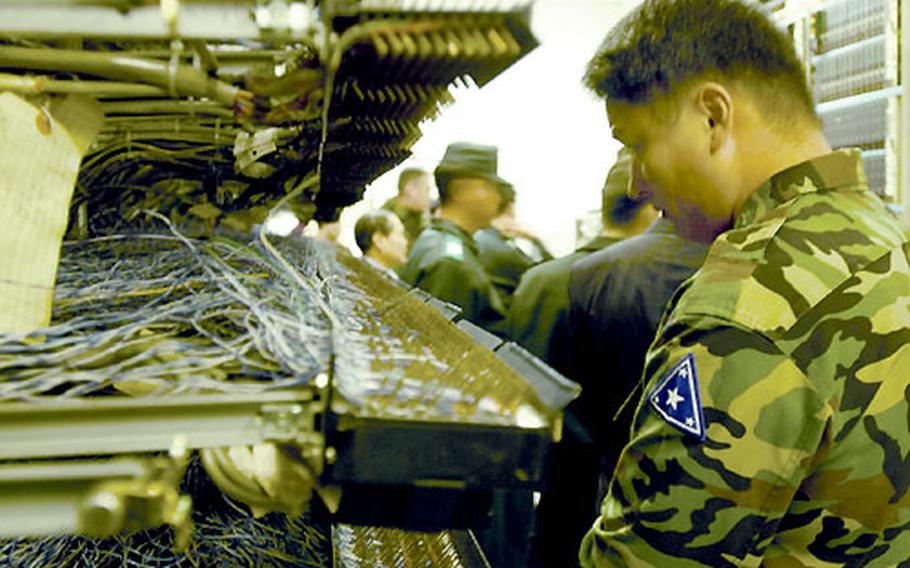 A member of the Republic of Korea Army&#39;s 60th Signal Battalion checks out the wiring at a telephone facility on Yongsan Garrison. (Joseph Giordono / S&S)

It buoys his mood because an old Korean proverb says the rain strengthens and renews the land.

So when Kim and other members of the army&#8217;s 60th Signal Battalion visited their American counterparts Tuesday at Yongsan&#8217;s 41st Signal Battalion, he was one of the few soldiers pleased by daylong downpours.

Soldiers from the U.S. 41st Signal Battalion could not have agreed more.

From telephone switches to computer routers to a microwave relay tower, the 41st Signal Battalion and 1st Signal Brigade provide and maintain the backbone of the Army&#8217;s &#8220;strategic&#8221; communications network in a wide swath of central South Korea.

The tour was arranged as part of the U.S. Forces Korea outreach program to South Korean soldiers and civilians.

For the signal corps, it was especially important because the two forces interact often.

After the overview, the group toured a telephone switching facility that operates some 10,000 telephone lines at Yongsan Garrison alone.

Then, it was off to the microwave relay station atop Namsan Park in Seoul.

The U.S. Army has a small post there &#8212; Camp Morse &#8212; which has its own smaller tower in the shadow of the Seoul Tower, a popular city landmark.

South Korean company commanders usually are majors; they often are captains in the U.S. Army. And while the American signal corps are Army, the South Korean military employs a joint staff from all of its forces.