SIGAR: Were America’s efforts to help feed Afghans fruitful? No one can say. 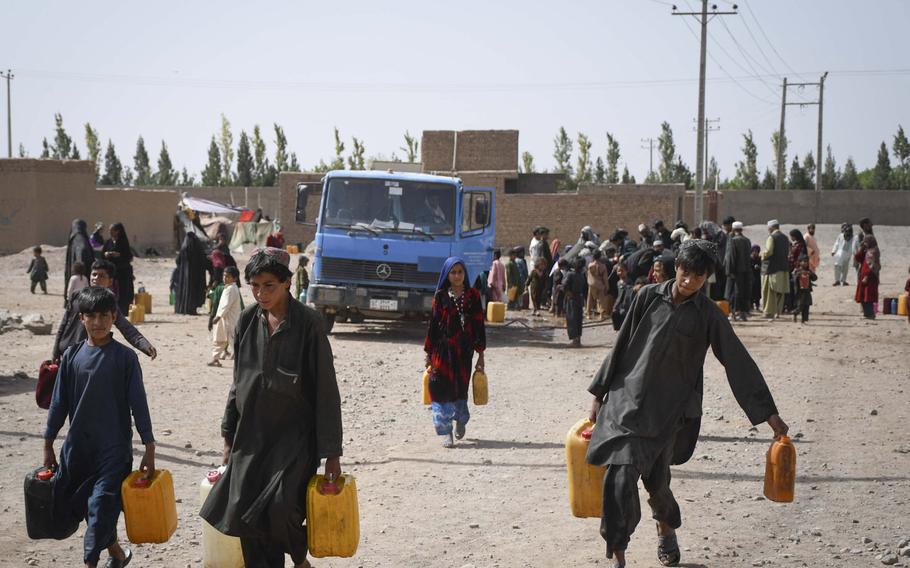 Afghan children draw water at a camp on the outskirts of Herat. The U.S. Agency for International Development has spent $589 million since 2010 to feed starving Afghans, but a lack of oversight means no one knows how much of that was stolen, a Pentagon watchdog group said. (J.P. Lawrence/Stars and Stripes)

KABUL, Afghanistan — No one knows how much of the $589 million in food aid donated by the U.S. to Afghanistan since 2010 was stolen, a Pentagon watchdog group said in a recent report.

The U.S. Agency for International Development spent the money to feed starving Afghan families, but a lack of oversight amid reports of theft by both insurgents and government workers leaves no way to account for what has happened to the food, a report by the Special Inspector General for the Reconstruction of Afghanistan said late last month.

“Millions of dollars in emergency food assistance in Afghanistan remain at risk of waste, fraud, and abuse because USAID cannot directly monitor the distribution of food assistance,” the report said.

Thefts included a scheme in 2015 in which Afghan government workers took 20% of the food meant for students and sold it at local markets, the SIGAR report said.

Until 2013, losses from fraud or waste were not tracked. USAID later relied on subpar record-keeping from its local partners, the report said.

More than 91% of reports from the United Nations World Food Program and the U.N. Children’s Fund, who partnered with USAID, lacked data on food safety, expense and transportation costs, SIGAR said.

“USAID cannot determine whether it is funding projects that are achieving their desired outcomes,” the SIGAR report said.

U.S. officials were only able to visit one food distribution project site — a warehouse in the capital, Kabul — once in the past five years due to security concerns.

Rural areas are where much of the fraud and theft occurs, said Ahmad Tamim Azimi, spokesman for the State Ministry of Disaster Management. Aid workers there must rely on tribal elders and provincial council members who often have their own agendas.

“We cannot guarantee full transparency,” Azimi said. “There are still some problem areas when it comes to corruption, especially in the insecure areas.”

Lack of security is a significant challenge to accountability efforts, said Marc Chretien, who served as senior State Department adviser to NATO forces in Afghanistan.

“[USAID] has limited ability to directly manage some of these programs,” Chretien said in an email. “In a perfect world they would obtain all the data to satisfy a SIGAR audit. It’s not a perfect world.”

In a response to SIGAR, USAID said it agreed with the report’s findings and that it hoped to start third-party monitoring of its projects in 2020.

Some improvements already have been made, a WFP spokesman said.

“WFP has been adjusting its monitoring and reporting activities and practices in general, and those specific to USAID very actively since 2017,” Wahidullah Amani said in an email.

Among Afghans, 60% said in a Gallup poll earlier this year that they struggle to afford food.

The worst drought in nearly 20 years hit Afghanistan last winter, leaving 5.2 million people in need of aid. This first winter after the drought likely will strain already-depleted food stocks, putting the country at risk of a hunger crisis, SIGAR said.

Ghulam Dastagir, a farmer in the country’s western Herat province, said people will starve this winter because of corruption.

The lack of help has left him with bitter feelings about the U.S.-backed government in Kabul, he said.

“This is all lies,” Dastagir said of food assistance efforts. “Poor people do not get anything.”