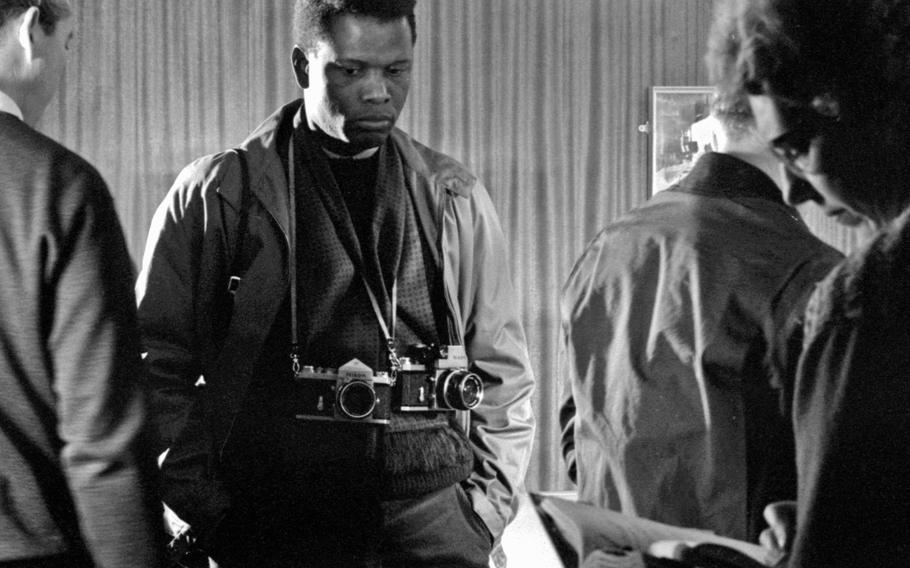 Buy Photo
Actor Sidney Poitier, center, during the filming of ''The Bedford Incident'' at London's Shepperton Studio in November, 1964. (Red Grandy/Stars and Stripes)

OSCAR-WINNER Sidney Poitier disclosed in London, where he's filming "The Bedford Incident," that he will star in his own play — his first — which is scheduled to open next September on Broadway.

The play, Poitier explained, deals with the problems of modern youth — "the semi-literate mass that roams the streets.

When asked if he would be in the cast, Poitier smiled broadly and said, "Naturally, I work cheap. I can afford myself."

Poitier said it took three years of his spare time to write the play, entitled "600 to 1" and that it would go into production after he has finished film assignments in Hollywood and London, the latter being in addition to his present role, that of photographer-correspondent Ben Munceford aboard a U.S. destroyer on anti-submarine patrol. This is Poitier's sixth film in Europe and, he said, no matter where he is life can be boring if the script is no good. Perhaps this explains why he has taken up writing, hoping that by joining them he can beat them at their own game.

The tall, talented star won an Oscar for his memorable performance in "The Lilies of the Field." He had previously been nominated for the Academy Award for his role in "The Defiant Ones."

Poitier was born in Miami, youngest of nine children. His family now numbers four daughters, ranging in age from 3 to 12.

"The sea was our backyard," recalled Poitier of his own childhood.

When he was three months old, his family moved to Cat Island in the Bahamas.

HE HAD to quit school and go to work when he was 15 because his father's tomato farming business failed. The youngster finally drifted to New York, where he got jobs as a dishwasher, dock-hand and even as a chicken plucker. When war broke out, he enlisted in the Army and served with a medical until 1945.

Poitier got into acting through an ad appealing for actors for the American Negro Theater. His first audition was a failure. His West Indian accent was too strong. But six months later, after concentrated speech study, he was accepted.

From serving as an understudy to Harry Belafonte, he has progressed to better stage, film and TV roles until, today he's at the top of his profession, looking for new lily fields, to conquer as a writer-director.