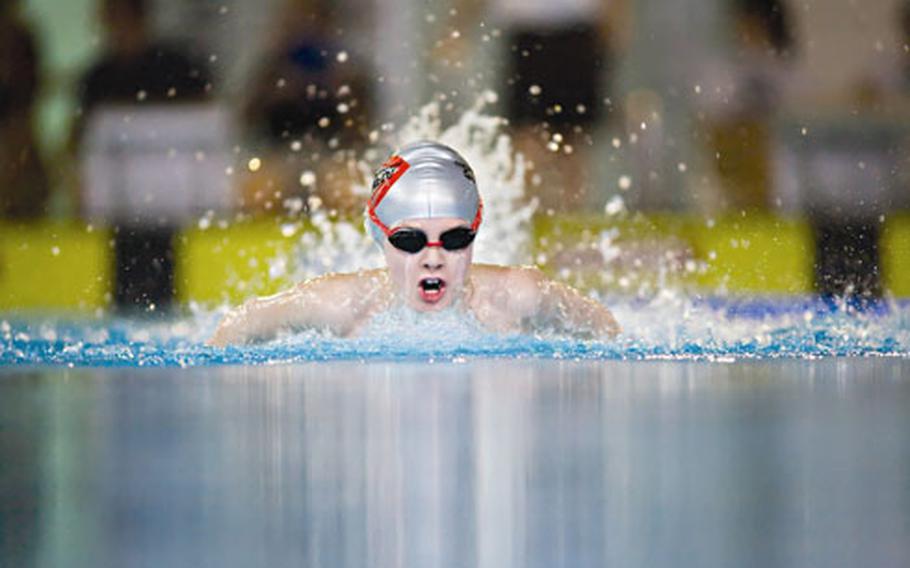 Lakenheath elementary student Dominic Scifo, 9, swims his way toward setting a record in the 200-meter individual medley this month at the European Forces Swim League Championships in Berlin. Dominic set three records at the championships. (Courtesy of Dominic Scifo)

Lakenheath elementary student Dominic Scifo, 9, swims his way toward setting a record in the 200-meter individual medley this month at the European Forces Swim League Championships in Berlin. Dominic set three records at the championships. (Courtesy of Dominic Scifo) Dominic’s sister, Alaina, 11, receives an award for highest points in her age group at the championships. The award was presented by Steve Genter, right, a 1972 Olympic gold medal swimmer. Alaina grabbed fived gold medals at the event. (Courtesy of Dominic Scifo)

Even though he&#8217;s only 9, Dominic Scifo has learned an important lesson when it comes to sports: Sometimes you&#8217;ve just got to grit it out.

That&#8217;s what keeps the Lakenheath Elementary School third-grader pushing forward when the going gets tough in the pool. It&#8217;s not so much the competitive swimming that is difficult, he said, but just going fast.

Dominic and his 11-year-old sister, Alaina, sure didn&#8217;t give up earlier this month when they took home numerous medals and records at the annual European Forces Swim League Championships in Berlin.

The duo are remarkably modest about their achievements. Among their accolades, Alaina grabbed five gold medals and nearly had a sixth in a nail-biter in which she placed second. Dominic walked away with three records &#8212; in the 200 meter freestyle, 200-meter individual medley and 50-meter freestyle &#8212; and six gold medals.

The two have been swimming for about three years. The entire Scifo family just sort of fell into swimming, according to father Tony.

Tony Scifo is a supply technician at Lakenheath Elementary, while mom Debra is a teacher.

Initially, they took the kids to local pools just to have a fun swim.

Fast forward a few years and swimming has come to dominate the Scifo family. The kids practice four to five times a week and make the approximately hourlong drive to Ipswich a few mornings to train.

The siblings differ on the early morning sessions, with Alaina enjoying the time while Dominic isn&#8217;t too crazy about it.

Still, the focus on swimming has helped the family make friends with British enthusiasts, the father said.

Alaina said the training can get difficult. Some sessions involve 2,000 meters with a kick board before the strokes even begin.

Still, she&#8217;s hoping it pays off as she works to qualify for the British nationals in the coming months.

While Department of Defense Dependents Schools does not pay for any swim-related expenses, Tony Scifo said that parents and kids interested in the sport can find plenty of options around the U.K.

"Every village has a swimming club," he said.