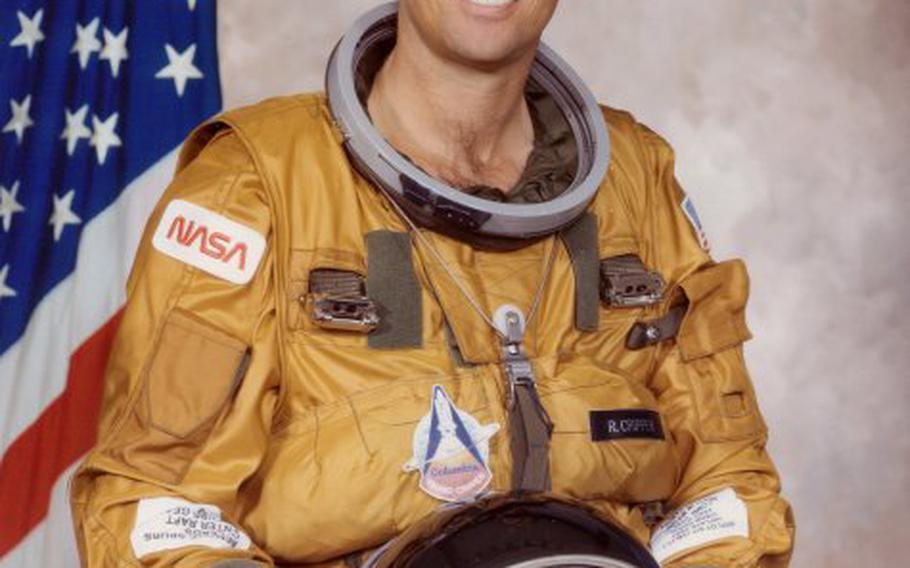 Robert Crippen is a Navy veteran who piloted the first shuttle mission in 1981. (NASA)

In the United States, the people who fly spaceships come from the Army, Navy, Air Force and Marines. When it comes to managing risk while carrying out the mission, NASA officials say, no other group can touch military test pilots.

&ldquo;Every commander and every pilot of every shuttle mission we&rsquo;ve ever flown has come from a military background,&rdquo; said John Shannon, shuttle program manager. &ldquo;We&rsquo;ve always gotten the majority of our astronauts from the military. If you want the best, brightest, most disciplined people who know how to function as a team, that&rsquo;s where you go.&rdquo;

But with the end of the shuttle, NASA won&rsquo;t itself be sending humans into space for the foreseeable future. Private space entities are starting up &ndash; on Thursday, NASA signed an agreement with Sierra Nevada Corp. to develop and launch a private shuttle from Kennedy Space Center &ndash; but where private astronauts will come from is an open question.

NASA veteran Robert Crippen, a Navy veteran who piloted the first shuttle mission in 1981 and later directed the shuttle program in the 1990s, said NASA will still need astronauts for International Space Station missions. But soon they&rsquo;ll be flying to the space station on Russian Soyuz craft flown by Russian pilots.

&ldquo;They&rsquo;re going to need to maintain a substantial base in the astronaut office, but I think the requirement for military pilots is likely to decline,&rdquo; Crippen said.

&ldquo;Currently it&rsquo;s under review whether we&rsquo;re going to do another class at this time,&rdquo; she said.

There are 61 active astronauts, she said, about a third of them military pilots. NASA needs 55 to 60 for ISS operations, she said. The slight reduction will be reached by attrition, not layoffs.

There might be fewer astronauts overall, but military people will always be in the mix, she said. They&rsquo;re valued for their leadership ability, and their potential to take over for a Russian pilot in case of emergency.

When astronaut recruiting starts up again, military people will be among the candidates, Cloutier said: &ldquo;Having military skills is something we know is very valuable in the space program.&rdquo;