Shulkin looks to carry on predecessor’s plans for VA 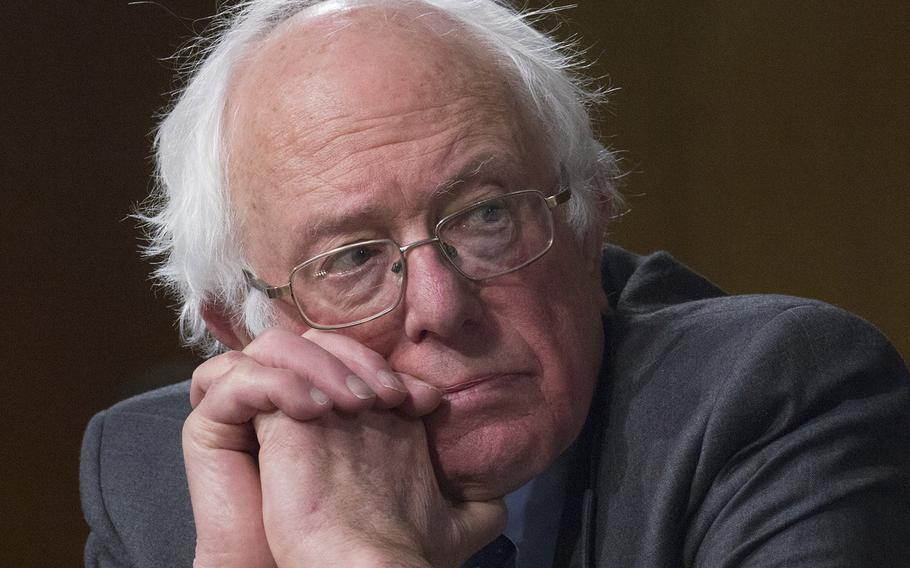 WASHINGTON — David Shulkin, the nominee for secretary of the Department of Veterans Affairs, on Wednesday echoed many of his predecessor’s plans and priorities to reform the beleaguered agency, rather than supporting the more radical changes proposed by President Donald Trump and some conservatives.

During his Senate confirmation hearing, Shulkin, a physician who has worked as the VA’s undersecretary of health for 18 months, backed off an idea that was part of Trump’s campaign to allow all veterans to access private sector at the government’s expense. Shulkin signaled he would follow at least some of former VA Secretary Bob McDonald’s outline for VA reform, which includes creating a network in which private-sector care would augment treatment at VA facilities.

“I will seek major reform and a transformation of VA… but the Department of Veterans Affairs will not be privatized under my watch,” Shulkin said during the hearing.

Sen. Jon Tester, D-Mont., ranking member of the Senate Veterans’ Affairs Committee, predicted there would come a time when Shulkin would have to choose between his path for VA reform and the president’s plan.

Republican and Democratic committee members said there were good stories happening at the VA, statements in contrast to Trump’s campaign message that it was “the most corrupt agency” and “probably the most incompetently run agency” in the federal government.

“I did not talk to [Trump] about his past comments, but he and I agree we need to do a lot better for our veterans,” Shulkin said.

He said complaints about the VA workforce was “absolutely hurting” recruiting new employees.

Unlike Trump’s other Cabinet picks, the 57-year-old Shulkin is a holdover from President Barack Obama’s administration.

As undersecretary for health, Shulkin oversaw the Veterans Health Administration – the country’s largest health care system – which comprises approximately 1,700 facilities nationwide and served about 9 million veterans in 2016. As VA secretary, he would responsible for the agency’s nearly $180 billion budget and approximately 370,000 employees across the country.

Shulkin was quizzed during the late afternoon hearing, and he responded to multiple questions about how he would work with Trump on VA reform.

“I will be a tireless advocate to ask the president for everything we need,” he said.

Care in the private sector After the 2014 scandal when veterans were found to be waiting long periods for care, Shulkin led implementation of the temporary Veterans Choice Program, which allows veterans to receive private-sector care if they cannot get an appointment at a VA facility or live too far from one.

The choice program, which veterans have complained is complex and confusing, is set to expire in August.

Under Shulkin’s plan, he said he would allow veterans who need immediate care to go to a private-sector provider at the VA’s expense. Access to care would no longer be based on distance from a VA facility, he said.

In Trump’s 10-point plan to reform the VA, he said he’d ensure “every veteran has the choice to seek care at the VA or at a private sector provider of their choice.”

One plan for change, proposed by Concerned Veterans for America – a conservative-leaning group that gained access and influence in Trump’s transition team at the VA – was to transfer oversight of medical facilities to a government-chartered nonprofit and allow veterans to receive immediate care from any doctor, at the government’s expense.

Most in the veterans community generally agree veterans should have better access to private-sector health care. But some veterans have said expanding the program too much would be “privatization” – an action that the Committee for a Responsible Federal Budget, a nonprofit that tracks the fiscal costs of policy, tallied at $500 billion in costs during the next 10 years.

Large veterans organizations have argued too much money toward non-VA care could dismantle the agency, which is uniquely tailored to treat service-related health care issues. Under McDonald’s plan, the “Plan to Consolidate Community Care,” the VA would realign its health care into regional networks, with management of private-sector care at each region.

“My view of where the VA needs to go is to an integrated system of care – the best of the VA and the best of the community,” Shulkin said. “That’s what I would work toward.”

Acting VA Secretary Robert Snyder on Friday issued a list of positions exempt from the freeze, including many health care providers, staff at national cemeteries and workers on major construction projects.

Shulkin on Wednesday told senators there are now 45,300 job vacancies at the VA. The exempted positions comprise 37,000 of them.

“I’ve been very pleased… after the freeze came out, we went to the White House and got an exemption for all of the positions that are critical, related to health and safety,” Shulkin said.

But job openings in the Veterans Benefits Administration were not exempted, and employees there are working on a backlog of about 97,000 claims for pension and disability compensation, the latest VA data shows.

Veterans of Foreign Wars, Disabled American Veterans and Paralyzed Veterans of America wrote a letter to Trump on Tuesday asking he exempt all VA positions from the freeze. They worried not being able to fill positions would lead to delays in veterans receiving education and health care benefits.

Shulkin said he was tracking how many claims are being processed. He might ask the White House for another exemption if there are problems, he said.

“If we’re seeing a big concern with that, then I plan on going back and addressing that,” he said. “Without getting benefits, veterans can’t get access to health care. So, those two are connected.”

Tester said he had constituents wondering whether Shulkin would improve issues with veterans benefits, because his history is only with the health care system.

“Benefits is not going to suffer if I am secretary,” he responded.

Appeals modernization Shulkin said improving the process for veterans to appeal claims will require action from Congress to fix the system.

“We have no hopes without a modernization act being passed through Congress,” he told the committee. “It is a broken process. It won’t get better without your help. We hope you and your colleagues will pass something this year.”

At the end of the congressional session last year, lawmakers settled on a veterans reform bill that included only pieces of what the VA and veterans groups were hoping to accomplish, and omitted measures to improve the appeals process. In his last weeks as VA secretary, McDonald blamed partisanship for Congress’ lack of action on the issue.

Sen. Richard Blumenthal, D-Conn., said he would reintroduce legislation this session to fix the problem.

Tester said Shulkin would need the ability to “deal with a Congress that has not proven itself to be the most cooperative partner.”

“There have been some reports, very legitimate reports, where there have been malfeasance, and their actions deserve to be punished or revealed,” said Sen. Dan Sullivan, R-Alaska. “When that doesn’t happen, it undermines the trust from our veterans.“

First civilian to run VA If confirmed, Shulkin would be the first VA secretary not to have served in the military.

Many veterans groups said they were willing to overlook Shulkin’s lack of military service because of his experience at the VA. His nomination Jan. 11 was met with praise by many veterans groups that had feared the nomination of an outsider could lead to delays in continuing reform of the agency.

In response to concerns about his lack of military service, Shulkin made known his connection to the military in his prepared testimony. He was born at Fort Sheridan, an Army base in Illinois, and his father was an Army psychiatrist. Both of his grandfathers were Army veterans, and one went on to work as chief pharmacist at the VA medical center in Madison, Wisconsin. Shulkin, a physician, also trained at VA hospitals early in his career.

But senators did not question Shulkin about not being a veteran.

At points during the two-hour confirmation hearing, senators were complimentary of Shulkin and of Trump’s decision to name him as secretary.

“One of the things people would tell you about me is I don’t have a lot of patience,” Shulkin said. “I’m going to be serious about making changes and regaining trust, and if I don’t, I should be held accountable, and you should replace me.”

Sen. Johnny Isakson, R-Ga., chairman of the committee, said he wanted Shulkin’s confirmation to go up for a Senate vote by the end of next week. He gave committee members until 6 p.m. Monday to submit more questions.