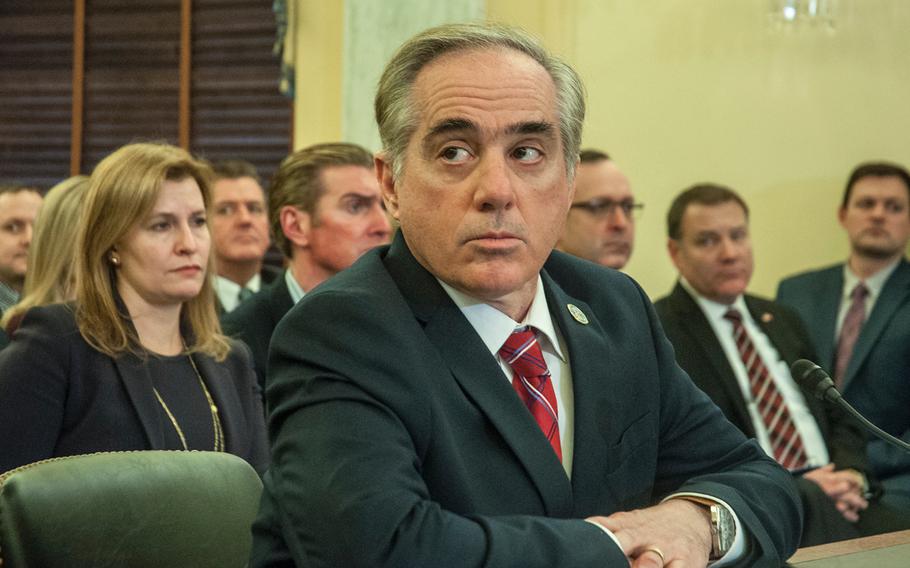 WASHINGTON — Proponents for research into using medical marijuana to treat post-traumatic stress disorder and chronic pain were dealt another blow this week, after comments from Department of Veterans Affairs Secretary David Shulkin made it clear the agency will not explore anytime soon how the drug could help veterans without a change to federal law.

Shulkin wrote in a letter to House lawmakers that the VA was restricted from marijuana research because of federal law. Later in the week, he acknowledged while testifying before the Senate Veterans’ Affairs Committee that the law does allow the VA to study the use of marijuana, but it makes research difficult. Marijuana is on the list of Schedule I drugs, which are designated as having no medical use and have the most regulatory hurdles to overcome in order to access and research them.

“We have to go through multiple agencies, and it is very challenging to work our way through that process,” Shulkin told senators Wednesday.

Shulkin also told the committee if they wanted research to happen, they’d have to change the law.

“If Congress made it easier to go through the process, it would probably happen faster,” he said.

But Rep. Tim Walz, D-Minn., who recently took on the issue of marijuana research, said he interpreted Shulkin’s comments this week as “dismissive.”

“Just because it’s hard, doesn’t mean you shouldn’t do it,” Walz said.

A growing number of veterans have gone to lawmakers and veterans organizations, such as The American Legion, claiming marijuana eased their symptoms of PTSD and chronic pain. Advocates for research believe legitimate studies into marijuana could determine whether those claims are plausible, and if they are, that the results could lend more credibility to the medical marijuana movement for all Americans.

Supporters of increased access to medical marijuana haven’t yet had success getting Congress to rewrite federal drug policy. Walz and some veterans organizations hoped Shulkin’s involvement would spur progress.

In a letter to Shulkin in October, Walz asked him to support research into the efficacy of marijuana to treat PTSD and chronic pain, which would help Congress remove barriers to that research. Shulkin sent a response back, stating only that there were restrictions.

“He has not asked for help to remove those barriers. If so, we would start building a coalition to do what he needed,” Walz said. “He hasn’t asked. If you read his letter, there was no desire to pursue this.”

Shulkin also wrote in the letter to Walz that laws restricted the VA from referring patients to non-VA research projects on medical marijuana.

Researchers with the Scottsdale Research Institute in Arizona have already begun to study marijuana, using only veterans as subjects. During the past seven years, they gained approvals from the U.S. Food and Drug Administration and Drug Enforcement Agency. When their study is completed, researchers aim to have a definitive answer of whether marijuana effectively treats PTSD.

But now they’re struggling to find enough veterans to enroll in the study, and the Phoenix VA is barred from referring their patients. If the VA won’t do its own research, they could support the research already underway, said Sue Sisley, the study’s principal investigator.

“Although qualifying participants continue to be enrolled in the trial at a slow rate, the rate of enrollment, and the study’s overall progress, would be enhanced significantly if the U.S. Department of Veterans Affairs would agree to order the Phoenix VA to refer veteran patients to the trial,” she said.

Veterans were at the forefront of attempts in Washington last year to remove marijuana from the list of Schedule I drugs. They argued the VA should allow its doctors to recommend medical marijuana to patients in cannabis-friendly states, and they insisted marijuana was a possible solution to combat the epidemic of opioid overdoses in the United States.

The American Legion reached out directly to Shulkin with requests to study marijuana or allow the Phoenix VA to refer patients to the Scottsdale Research Institute, but received no substantive response, Legion officials said. The organization is still pushing for marijuana to be taken off the list of Schedule I drugs.

“We want America’s veterans to have the best care possible,” said Louis Celli, a national director with the Legion. “This requires the VA to research therapies that show potential for improving veterans’ health care outcomes.”

Nick Etten, a former Navy SEAL and founder of the Veterans Cannabis Project, said the VA – and everyone else – needed to treat the situation as a health policy issue.

“This will be tough, but it doesn’t have to be,” Etten said of loosening federal restrictions on marijuana. “It’s time for this country’s leadership to acknowledge our voices on this issue.”