Shropshire: Base teams up with sanctuary to offer wolf close encounter 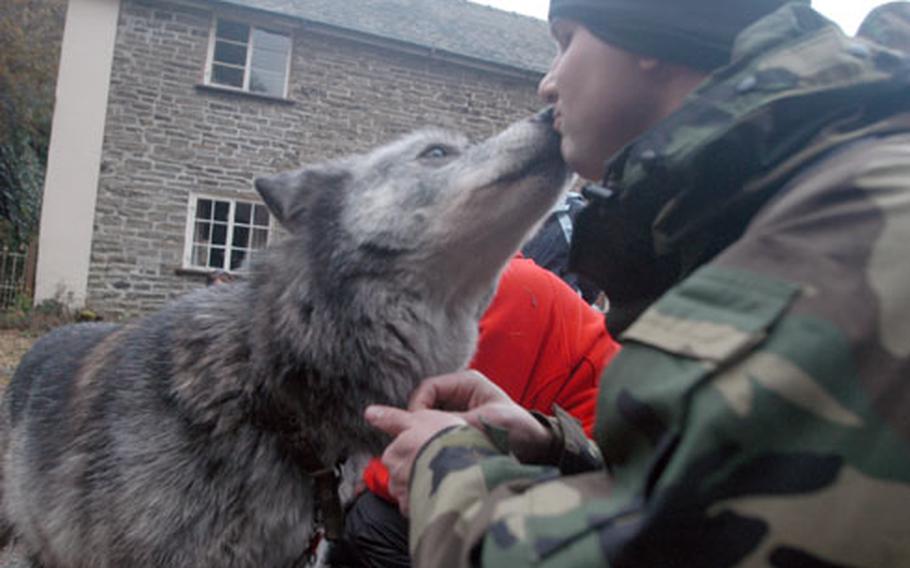 Staff Sgt. Clinton Petit gets a peck from Madadh, one of two highly domesticated wolves at the Wolf Watch U.K. center. ()

Staff Sgt. Clinton Petit gets a peck from Madadh, one of two highly domesticated wolves at the Wolf Watch U.K. center. () 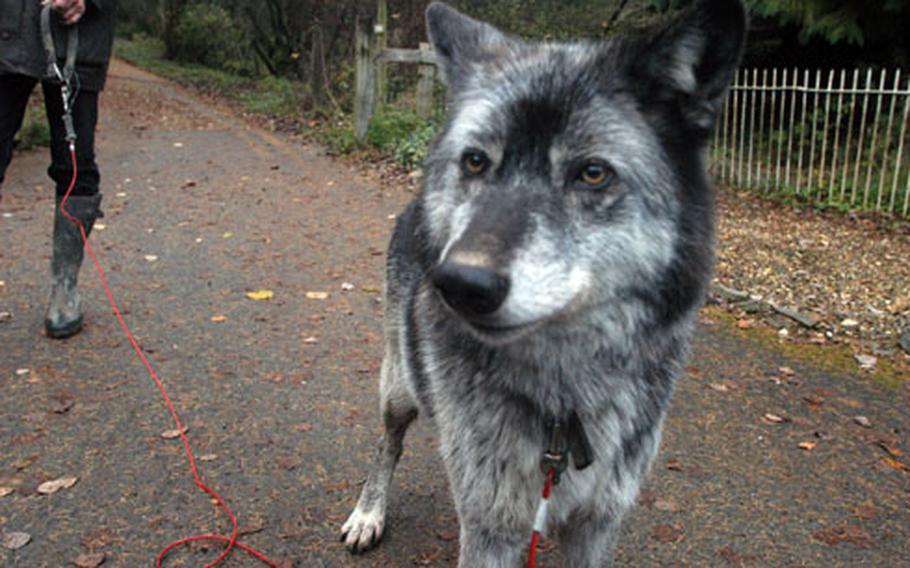 Madadh, one of two highly domesticated wolves at the Wolf Watch U.K. center, is taken out to greet visitors on a lead by the sanctuary’s director, Tony Highway. He monitors the wolf’s behavior throughout the encounter, helping both man and animal relax. () 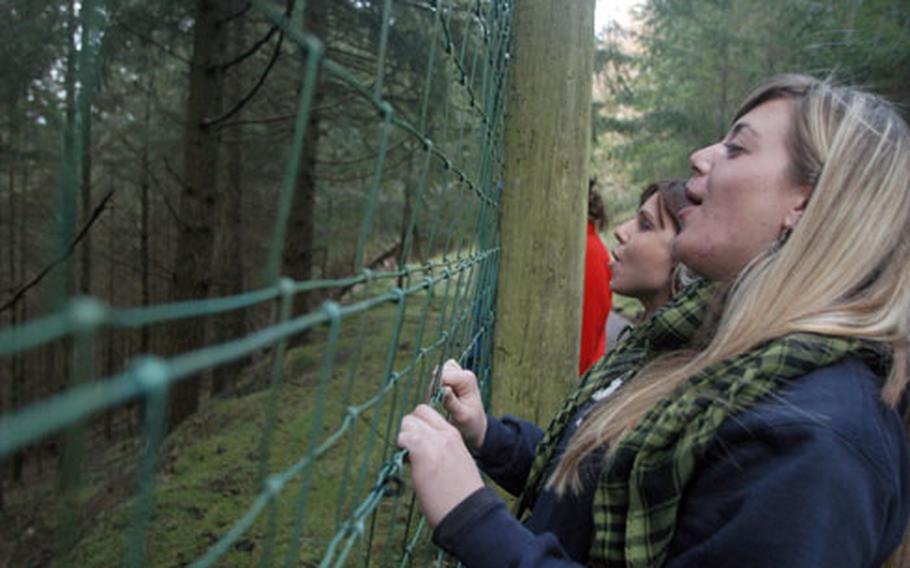 Tara Dixon, foreground, and Jacy Gleaves, background, howl down into the valley during a visit to the Wolf Watch U.K. center in Shropshire, near the Welsh border. Mildenhall Outdoor Recreation has a relationship with the private, nonprofit wolf sanctuary and hosts trips there throughout the year. () 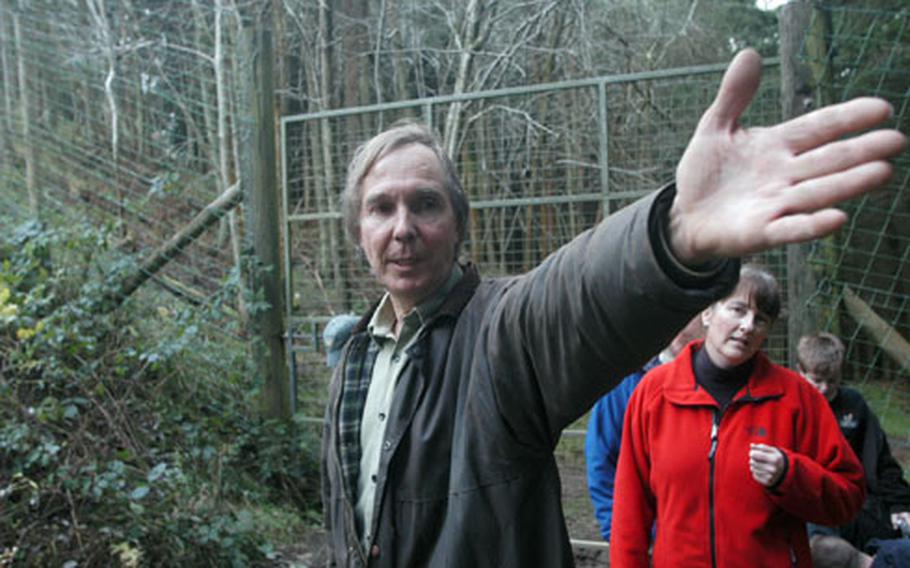 Tony Highway explains the lay of the land at the 85-acre refuge in north England. (Photos by Charlie Reed)

When it comes to wolves, their primal howl, calculating pack mentality, fierce bite and sleek aesthetic garner as much respect outside the animal kingdom as they do within.

If wolves are your thing, Wolf Watch U.K., near the Welsh border, is a must.

Outdoor Recreation at RAF Mildenhall teamed up with the nonprofit wolf sanctuary in northern England about three years ago. Keats McLaughlin, a wolf enthusiast and adventure program director, forged the relationship after arriving here from Elmendorf Air Force Base in Alaska.

"People have lot of ideas about wolves from fairy tales and Indian tribes. They just have a mystical feel," said McLaughlin, who helped rehabilitate a wounded wolf when he was stationed in Alaska.

Wolf Watch is far from a zoo. In fact, it&rsquo;s not even open to the public. Group trips such as the ones offered periodically through Mildenhall are the only way to get a peek inside the sprawling 85-acre refuge run by zoologist Tony Highway.

Like the 15 wolves Highway has adopted over the past 20 years, the four wolves in his care now were previously held in captivity and would have been euthanized if it weren&rsquo;t for the center, explained Highway.

Most that are taken in by Wolf Watch were too aggressive to stay at their previous homes, namely zoos. As a result, Highway has built a series of vast enclosures to give them their own space when necessary. But he also brings them together at times to provide the social interaction so vital to their existence.

Ironically, Highway and his team of volunteers struggle with the very essence of what they do.

The wolves shouldn&rsquo;t be held captive, he said. "The only justification we have is that this is all that&rsquo;s left for them. And that motivates us to provide the best environment possible."

The experience starts out in a smoky, fire-lit stone barn that serves as a lecture hall. Highway talks a bit about how he wound up running a wolf sanctuary and the philosophy that guides the Wolf Watch mission.

"This is a hobby that got out of hand, is what it is," said Highway, an affable character with tons of stories who serves up cups of hot tea and homemade cakes for visitors.

Guests get up close and personal with the animals when they&rsquo;re feeling friendly &mdash; the wolves, that is. The intensity of the encounters depends on their demeanor, which can change from day to day and from person to person.

For example, before Highway brings out Madadh &mdash; one of two wolves that live in the paddock next to his cottage &mdash; to play with visitors, he first allows her to "check them out" from behind a wooden gate.

He gauges another wolf&rsquo;s disposition before setting up visitors for a photo with the animal as it feeds on whole chickens, feathers and all.

Sandwiched between those two meetings is a hike through the picturesque hills and valley, cut by a serene river and dotted with a variety of birds and other wildlife. At one point, far out of sight of the wolves, Highway has visitors take their best shot at a howl.

After a few earnest attempts from novices on a recent trip, Highway gives it a go. His impression instantly gets a response from down the hill, and he quickly discerns which wolf it&rsquo;s coming from.

Like dogs, wolves smile. And judging by the beaming expressions seen on the animals at different times throughout the day, it seems like they&rsquo;re happy at the scenic sanctuary. The same goes for visitors, who grin from ear to ear during their tour.

"It&rsquo;s a huge privilege to be able to play with them," said Maj. Andy Rose, a pilot with the 351st Air Refueling Squadron at Mildenhall. "It&rsquo;s such a rare opportunity to be able to get so close. I don&rsquo;t think you&rsquo;d be able to do this in the States."

For more information about Wolf Watch, log on to www.wwuk.org. The next Outdoor Recreation trip to the Wolf Watch U.K. center is scheduled for January.