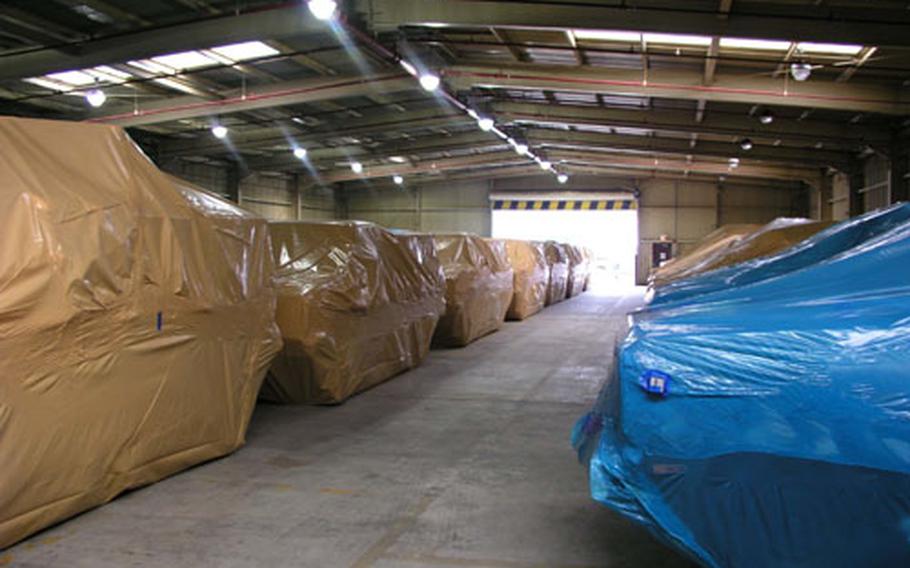 Some of the vehicles kept under plastic shrink-wrap at Osan Air Base, South Korea. (Franklin Fisher / S&S)

Some of the vehicles kept under plastic shrink-wrap at Osan Air Base, South Korea. (Franklin Fisher / S&S) 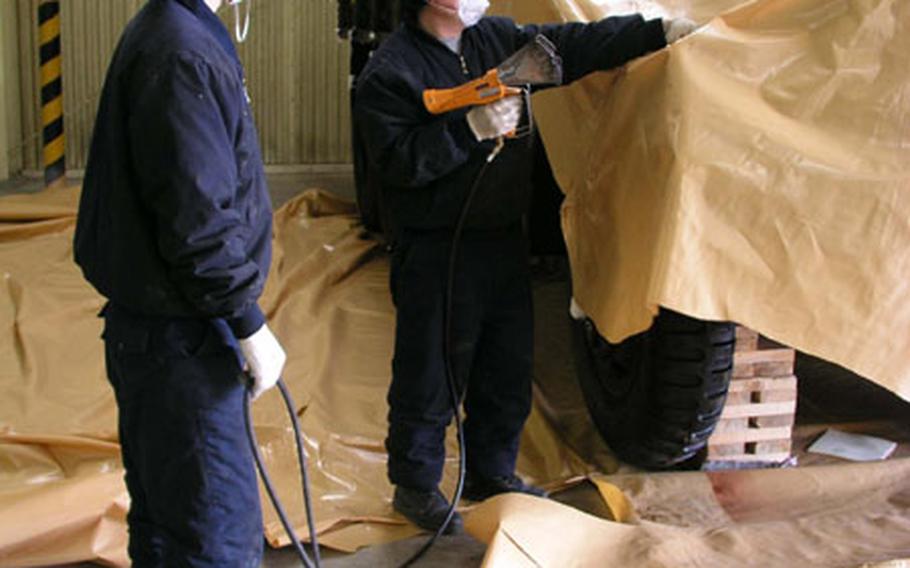 Workers at Osan Air Base, South Korea, begin shrink-wrapping a vehicle, which will help it last longer. (Franklin Fisher / S&S)

OSAN AIR BASE, South Korea &#8212; If security forces troops had to defend this air base, armored personnel carriers and uparmored humvees are just some of the equipment they would need in a hurry.

And because those and other vehicles need to be in ready-to-roll shape, the Air Force goes to special lengths to keep them that way.

It maintains some 400 vehicles here in what it calls its war reserve materiel, or WRM, fleet, and a big key to having them battle-ready is to keep a major portion of them in plastic shrink-wrap for three years at a time. When it&#8217;s time for those to be unwrapped, the remaining part of the fleet is then shrink-wrapped.

Osan&#8217;s goal is to have 75 percent of the fleet shrink-wrapped at a given time.

&#8220;It eliminates all environmental influence upon the vehicles," said Olson, "In other words, rain and moisture, humidity, sand, dirt, anything like that is essentially blocked out by shrink-wrapping the vehicle."

The squadron&#8217;s vehicle management flight maintains the WRM fleet, which consists of humvees, M-113 armored personnel carriers, and such civil engineer construction equipment as dump trucks and excavators, among other types.

&#8220;These vehicles are used for the first wave or strike, until communication and supply lines can be established to the theater,&#8221; Olson said.

The WRM vehicles also can be used as backups in special cases. Base civil engineers might use some of the construction equipment if, for example, the regular construction vehicles are in the maintenance shop.

And security forces can draw their WRM vehicles for use during training exercises.

A work force of 24 South Korean contract employees at Osan do the shrink-wrapping and maintenance work on the WRM fleet.

Workers cover each vehicle with the plastic sheeting, then seal it using a &#8220;heat gun&#8221; that melts the plastic in the necessary places.

But shrink-wrapping is actually only the final step. It begins with mechanical work.

&#8220;First of all the vehicle is put into the highest standard condition that we can possibly get the vehicle in,&#8221; Olson said.

&#8220;The next step is that we apply preservatives to both the inside and the outside of the vehicle,&#8221; Olson said. These include preservatives in the coolant system, engine and transmission. They also apply a paint and tire preservative.

Electronic battery conditioners and chargers are used to keep the batteries at full capacity &#8220;to make sure the vehicle starts the first time&#8221; it&#8217;s unwrapped, Olson said.

&#8220;By maintaining these vehicles in a ready state, it obviously allows us to apply that combat power quickly and effectively as possible,&#8221; Dinesen said.